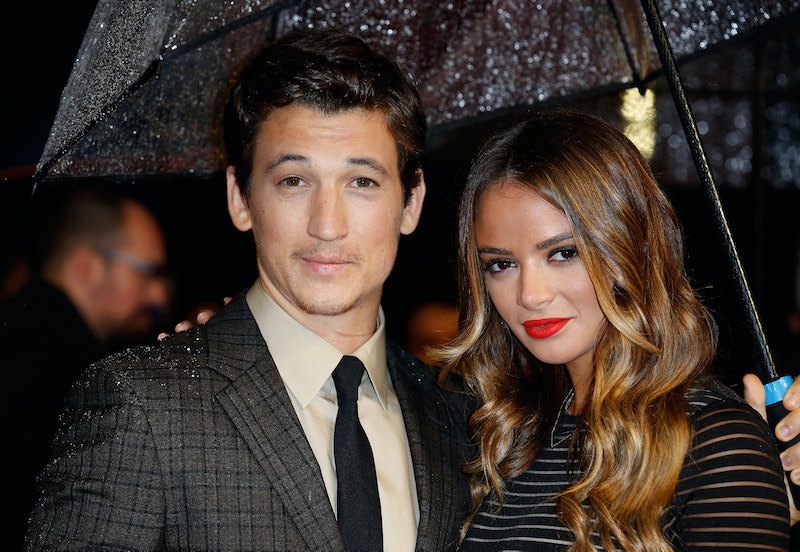 You know how it goes with two attractive co-stars with great on-screen chemistry: they have obviously got to be dating. And when a fandom ships a couple, they are pretty relentless. After Miles Teller and Shailene Woodley appeared together in The Spectacular Now and Divergent, Woodley revealed that she wanted her relationship with Teller to be like Julia Roberts and George Clooney's working relationship (who have also dealt with their share of dating rumors.) Teller revealed back in August 2014 to Vanity Fair that the two friends have never dated and that Woodley would probably "be repulsed at the thought." In fact, Teller has actually been dating a woman named Keleigh Sperry for quite some time. So, for the broken hearted fans everywhere, who is Miles Teller's girlfriend Keleigh Sperry?

To be honest, there isn't that much information out there on Sperry, except the fact that she seems to be a model of some sort. So, like usual, I will have to rely heavily on each of their Instagram accounts and other social media to deduce some things about their life, because being a lurker is essentially my full-time job and you can thank me for this later.

Upon Googling Keleigh Sperry I discovered that she has an account on Model Mayhem and is signed to Otto Models in Los Angeles. She is also apparently represented by L.A. Talent, which specializes in on-camera commercials. I have a feeling we will see her on-screen very soon.

She's Got Grandma's Stamp of Approval

Miles Teller is very close to his family, and he shared with Elle that his Grandma tweets with his girlfriend. That is totally adorable because I can't even imagine my grandmother using a phone properly. We all know that if the fam loves you, you're doing something right.

She's Got Some Jokes

Scrolling through her Twitter, I realized that we have a very similar sense of humor and that I think we could totally be friends because I automatically love people who share in my passion for guacamole. She's got plenty of other gems sprinkled throughout that lead me to believe that Miles Teller picked himself a girl with beauty, brains, and sass and I like him all the more for that.

Sperry has shared some photos with her good friend Jessica Szhor in the past (Nina Dobrev has been featured, as well) and I was slightly jealous when I saw her posing not only with Szhor but also with Taylor Swift. Although we can't really tell how close Sperry and Swift's friendship really is, Szhor is pretty close to Swift so, by proxy, I'd say they've hung out a few times.

Sperry's got some fabulous lady friends, a talented and supportive boyfriend, and a burgeoning career in entertainment. I'd say Keleigh Sperry is on the right track.