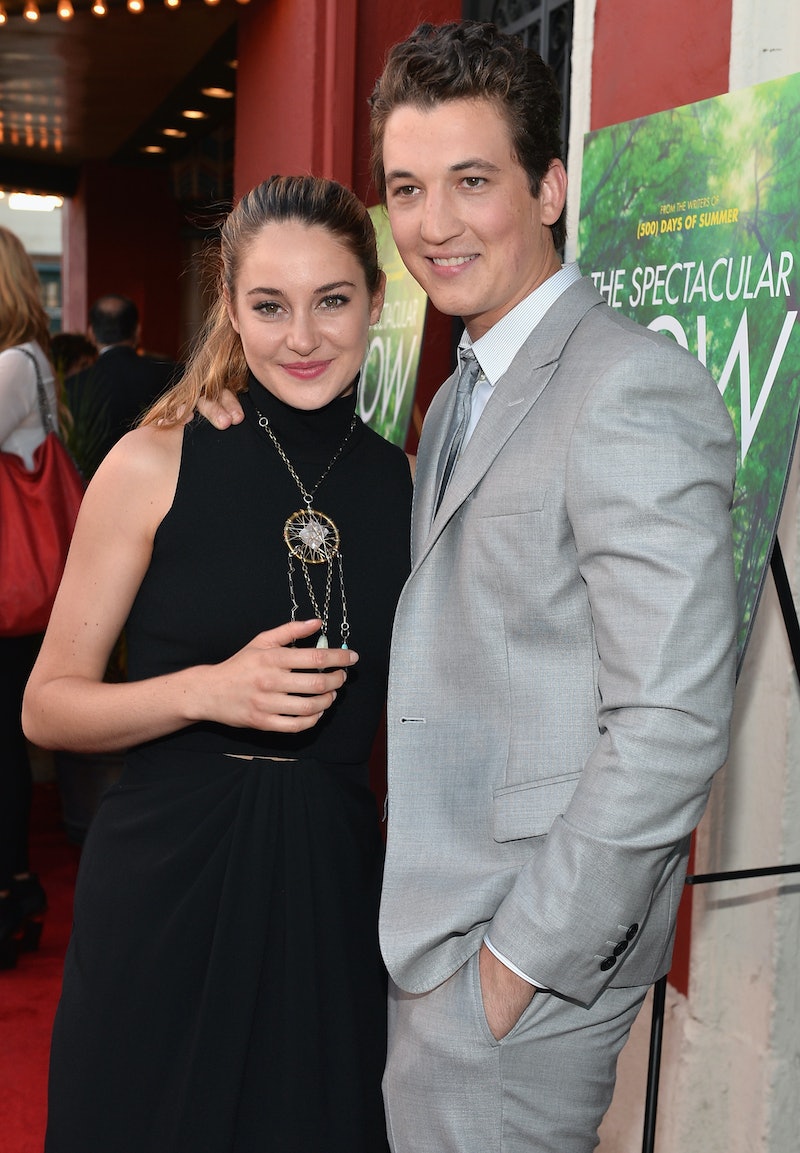 Between Divergent and The Fault in Our Stars, Shailene Woodley has gone from movie star to movie stardom. While it's been easy and incredibly fun to tease her about the most ludicrous things that she's said in the past — sunbathing your vagina? — there's no doubt that she's deserving of all the success that she's had so far. Woodley brought Hazel Grace to life in The Fault in Our Stars and she was almost our Mary-Jane Watson in The Amazing Spider-Man franchise. In her Vanity Fairy July cover, Woodley aspires to be something entirely new and entirely sweet. Woodley wants a relationship like Julia Roberts and George Clooney's with her co-star and friend Miles Teller.

George Clooney and Julia Roberts have been friends for years, through thick and thin, through dating rumors and George Clooney's engagement to Amal Alamuddin. In fact, Julia Roberts kind of helped Clooney propose, if you count allowing him to cook her a meal on the set of Ocean's Twelve, the skills from which he would later use to propose to Alamuddin, as helping. Woodley and Teller haven't known each other nearly as long as Clooney and Roberts have, but that doesn't matter.

"I look at Miles and, like, I’m sort of Julia Roberts in the same way she is to George," said Woodley in her interview with Vanity Fair. "Their relationship I could see being our relationship in 20 years, and that really is special."

That might be a pretty bold claim to make, but Woodley and Teller have laid the foundation for a Roberts and Clooney-esque friendship. In fact, the two celebrity friendships have a lot in common already.

George Clooney and Julia Roberts have worked on Ocean's Eleven, Ocean's Twelve, and Confessions of a Dangerous Mind together. Miles Teller and Shailene Woodley have worked on The Spectacular Now and Divergent together. They only need one more movie under their belt — preferably directed by one of them — to catch up.

For as long as George Clooney and Julia Roberts have been friends, there have been rumors flying that the two of them are dating. Sometimes, it doesn't even matter if they're with other people at the time. The same holds true for Teller and Woodley. When they worked on The Spectacular Now, fans were convinced Woodley and Teller were dating. After this interview, the rumors will likely start flying again.

When speaking to the LA Times about Woodley, Teller said, "She’s just so sweet, and she is so caring and kind and considerate... It’s very easy in this business to get bitter or jaded, but Shailene, I’ve never really seen her too upset." And when Julia Roberts was named People magazine's Most Beautiful, George Clooney was quoted as saying, "There's a reason why Julia is a timeless beauty, and it has nothing to do with the way she looks. It has everything to do with who she is." Awww.

As any good friend can tell you, when you care about someone as much as you do about your best friend you can't help but touch them. With everything from hugs to shoulder pats to communicating with just your eyes, Clooney and Roberts are masters of platonic love. And so are Woodley and Teller, who are frequently photographed hanging all over one another. Their body language tells us they care long before they ever need to.

Teller and Woodley don't look as classy doing it as Julia Roberts and George Clooney, nor did they commit to it quite as much, but, really, enough said. In 20 years, we may well be loving their friendship every bit as much as we do Roberts and Clooney's but, to be honest, I'm already in love.

More like this
Adam Levine & Behati Prinsloo Welcome Their Third Child Together
By Jake Viswanath
Meghan Trainor & Daryl Sabara Are Expecting Their Second Baby
By Jake Viswanath
Here’s What Happens To Bill & Frank In 'The Last Of Us' Video Game
By Brad Witter
Keke Palmer Shares The Sex Of Her & Darius Jackson's Baby
By Jake Viswanath
Get Even More From Bustle — Sign Up For The Newsletter
From hair trends to relationship advice, our daily newsletter has everything you need to sound like a person who’s on TikTok, even if you aren’t.