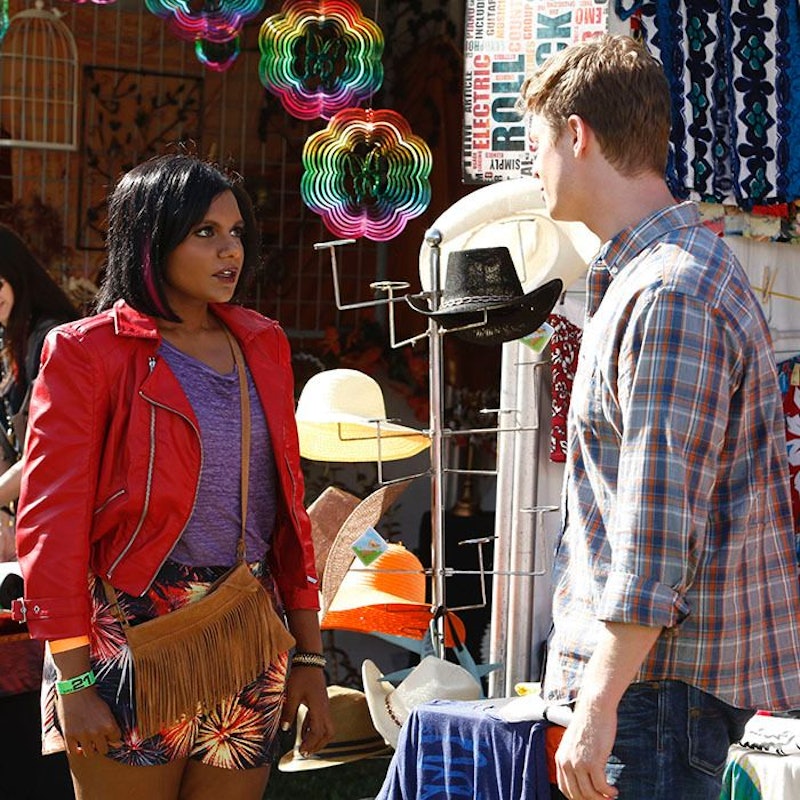 Last week we said goodbye to Pastor Casey (or DJ Sacrament) on The Mindy Project. And a lot like we said last week, thank god! I liked the 'Ders cameo, I really did. He was adorable as Casey, but the storyline went on just too long. Here are five things The Mindy Project can learn from Casey's departing (with only a voodoo doll to remember him by):

1. Let Mindy Lahiri be single for a second!

Okay, this doesn't look like it's going to happen as there are already promos for It's Always Sunny in Philedelphia star and creator Glenn Howerton to appear on the show tonight as Cliff Gilbert, a divorce attorney who butts heads with Mindy after she slips on a box he's left out (arguably, that's pretty funny). But Mindy JUST broke up with her FIANCÉ, and they're already introducing a new love interest on the show? Call me sadistic, but I want to see Mindy wallow for a while — not because I want her to be sad, but because I want to see what horrible, sappy movies that Dr. Lahiri watches when she's in a deep post breakup despair.

2. Give the rest of the practice more air-time.

I know it's The MINDY Project and not The Morgan or Danny Project, but damn, do I love Morgan and Danny. Four episodes into the season, I think they should be developing their own storylines — what's going on with Danny besides the fact that he apparently loves The National? I liked that he joined a support group for divorced dudes featuring Kris Humphries, but I wanted more of that scene featuring Kris Humphries. My favorite moment from Season 1 was when Danny and Jeremy try to get Morgan back to the practice by taking him to a frat party and then punching a bunch of college dudes. I am interested in these stories!

3. Make use of your millions of guest stars.

I like seeing other famouses interact with Mindy Kaling, because I love Mindy Kaling and want to see her talk to everyone. But with the veritable who's who that The Mindy Project is rolling out for Season 2 in terms of guest stars, it almost feels like a revolving door. Don't get me wrong, James Franco was hilarious as Dr. Paul Leotard, the cute-rival Mindy is almost replaced by (AKA the Other Dr. L), but he didn't do much to advance the plot besides make Danny realize he still had feelings for his ex-wife. Happy Endings' Adam Paley was just introduced to the cast as a Dartmouth frat douche, and I think he could be a welcome addition, provided he becomes a real, rounded character. I don't know where they're going to go with Glenn Howerton, but I hope he sticks around for a while, too.

I can actually kind of buy that Dr. Reed is fat now. Okay, fine. But where the hell did Casey wanting to become a DJ come from? That was definitely just an idea drawn from a hat to get rid of Anders on the show, when Mindy and the Pastor could have broken up for any number of other, more plausible reasons. (Like the fact that he's a PASTOR). Instead, we saw sweet, goofy, giving Casey turn into an immature sort of dick that's unsure of all his decisions and has a passion for... event planning? This felt like a write-off to me.

Hey — where did all of Mindy's best girl friends go?! Aren't any of them interested in seeing what happened to her and Casey? Don't they want to lend her a shoulder to cry on? In Season 1, we saw Mindy' best friend Gwen quite often (Mindy even attempts and fails to build a bunk bed with her daughter) and both Danny and Morgan vie for the affection of Mindy's friend Alex. Where are these gal pals now?! You can't have a show based on romantic comedies without a cast of ladies to discuss the ignorance and hopelessness of men!