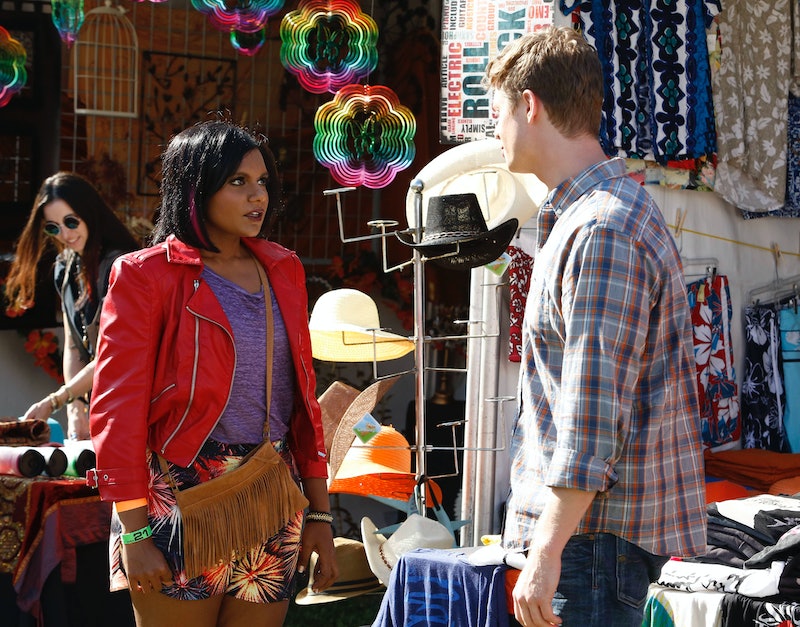 Tuesday night, The Mindy Project took us to a music festival and then straight to the heartbreak hotel. Mindy Kaling's Dr. L and Casey (Anders Holm) officially broke off their engagement (so that Mindy can go off and date Glenn Howerton and Timothy Olyphant when they guest star on the Fox series). And while Mindy was so in love she was willing to marry this man, I couldn't help but be giddy when she finally cut the chord — even as Mindy sat alone in her room, bearing the weight of another failed relationship.

Narrative cues suggest this wasn't supposed to be a breakup that made us giddy. We were supposed to be sad and by all rights, the episode should have moved me. As much as those of us who like to fancy ourselves Beyonce Pad Thai-level life ninjas, willing and ready to weather anything life decides to throw our way, breakups hurt no matter how strong or autonomous you are. This breakup just wasn't composed that way.

But it should have been. This stuff is hard for Mindy; that's the point of the entire series. Mindy's problem isn't meeting guys, it's keeping them around. When she found Josh, he was cheating on her. When she found Dr. Brendan (Mark Duplass), he treated her poorly and then creepily pined after her. When she thought Jamie (BJ Novak) was good a egg, he was actually in love with his best friend and Mindy was the distraction. In these situations, it was easy to feel for Mindy. As a fellow serially unlucky in love lady, I get it, and that's part of the reason I've stuck by The Mindy Project in its rougher patches. Like Mindy, I date the wrong guys; I fall for people who've already found their "person" but haven't figured out it's not me; I'm oh-so perpetually single. It's like Mindy just gets me.

But when Mindy fell into a committed relationship with Casey, the beat-boxing pastor, I cried foul. Mindy would never actually date this guy, let alone agree to marry him. I began rooting for a breakup like a tween shipping Jelena. It's one thing to want a relationship, it's another to take one because it's sitting there in front of you like a pile of stale, cold french fries. Still, when it came time to break up, there should have been some element of sympathy for Mindy. There should be a moment that lets us see the actual issue and the reason Mindy has called herself the titular Project: she hasn't yet learned how to do this relationship thing and, folks, it's hard.

Breakups have a way of sending all of us to that dark place: Was it me? Did I not try hard enough? Did I do [ ] too much? Did I not do [ ] enough? Those moments of self doubt and subsequent ego resurrections are one of the reasons The Mindy Project is so lovable: Mindy falls down hard, and Beyonce Pad Thai emerges stronger and with a great one-liner. It's cathartic to see ourselves, or our past selves, in Mindy's trials and tribulations — it's the gooey center of the show that keeps us around while the jokes keep us in stitches.

So when Mindy finally breaks up with a guy who's been wrong for her since the moment he stepped on screen, the breakup should be more about Mindy. Is she letting her perpetual singledom define her? If not, has she moved beyond it? Is she proud that she loves herself enough to call shenanigans on a relationship that is so clearly wrong? Is she strangely okay with this whole situation? Or is she, as any person ending an engagement would be, devastated? Instead, the episode felt as if it was dedicated to Casey — or at the very least, an episode dedicated to Holm seeing just how obnoxious he could be. Even Casey got the last word in their breakup: he left a voodoo doll with his face on it and a cute little note that said, "Don't use too many pins." No fair, Casey.

Of course, he's the one leaving the show and we've got plenty of time with Mindy, seeing as she's the star of the show and all. But in the writers' need to make use of their guest stars — especially Holm, who's more than overstayed his welcome — they're glossing over the reason we're all here. It's not about watching Mindy get swept away by man after man. It's about relationships and understanding them, which is ultimately, for Mindy, an internal project. It's something she has to figure out about herself.

So, please, by all means, let Mindy date her way through the weird and wonderful men in Bizarro Manhattan where she and her friends reside. But from one Project to another, please don't forget that we're here because of Mindy. She's not disgustingly figuring out how to lure men in like trout. She's learning how to understand herself, so that she might find someone who fits her just right and she's doing so hilariously. That's what needs to be front and center, not Pastor DJ.

Let Casey be a lesson: don't ever let another wacky man outshine our very funny lady. We need her to be our everything, okay?