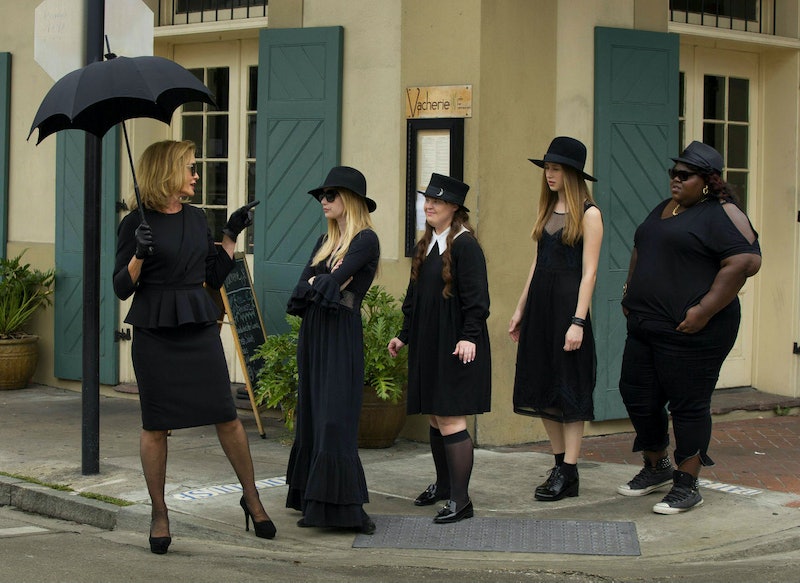 The excitement of American Horror Story: Coven premiering on FX Oct. 9 is threefold. Not only will the third iteration of Ryan Murphy’s horror series take us to New Orleans, it will deliver us a cast full of formidable actresses and a mix of witchcraft and voodoo. What more could we hope for from the beloved horror series? Well, we could hope for an image of women that isn’t painted based on an outdated base of stereotypes – but we just won’t get our wish.

With a cast that boasts names like Jessica Lange and Sarah Paulson as well as Kathy Bates, Angela Basset, Patti LuPone, and Frances Conroy, greatness is expected — and that’s before we even mention the young talent courtesy of Taissa Farmiga, Emma Roberts, and Gabourey Sidibe. This should be pulpy, campy, and completely fantastic. But after screening the first episode of the season, disappointingly titled “Bitchcraft,” I can’t help but be overwhelmed by some thoroughly disappointing traits in our troupe of supernaturally talented ladies. Though, I probably should have expected such from an episode that finally takes out the middle man and pairs the word “witch” with its disrespectful verbal soul mate “bitch.”

The worst offender is actually Queen AHS herself, Lange. Her character, the Supreme Witch (think Supreme Court Judge, not a Taco Bell taco that comes with sour cream and tomatoes) Fiona Goode is aging wildly ungracefully. Using her late husband’s fortune, she’s doing everything in her power to maintain her youth and beauty just like every evil mother figure since Queen Gertrude had that questionable bedroom moment with Hamlet.

We get it: Fiction loves an older woman desperate for youth. But is anyone else tired of this particular image of the aging woman? Why must an older woman be desperate for anything, be it power, youth, reclaimed sex appeal? How often is a salt-and-pepper 60-something man described as some sort of social leper, losing his grip on civilization as his bones start to deteriorate? Not often. Usually, he’s a silver fox running things with the help of his own hubris and guile. He’s often arrogant, but never desperate.

Lange’s Fiona, however, is in the early stage of the episode compared to a lab animal whose state is a simulation of a 60-year-old woman’s flagging health. The animal wears a diaper and limps about on its weak hips, miserable in its every move. What century is this? Since when does 60 equate to one’s death bed? The writers must know that people live to be over 100 these days. They must know that there are 60-year-old women having babies, swimming from Cuba to Florida, and entering body-building competitions. They must know that women’s lives aren’t over at 60.

Sure, Lange’s character is painted as the villain early on, but she’d be a much more rewarding adversary if she had more interesting motivations and didn’t possess the same goals as the evil queen from a 1937 Disney cartoon.

The other women in the show don’t far so well either. Paulson’s Cordelia Foxx is Fiona’s daughter and mistress of a finishing school for young witches; she’s curt and strict about hiding the girls’ magic from the outside world. She’s a severe and direct expression of rebellion from her mother, whom she hates.

Cordelia’s mother is the Supreme witch and wants witches to exhibit their powers, so Cordelia teaches her girls to do the exact opposite. Great. I was wondering when we’d finally get another black and white mother-daughter relationship filled with stereotypically bitchy resentment on television. There clearly isn’t enough of that narrative, built on the assumption that women are catty and quick to hate their mothers, everywhere else in television and film.

And truthfully, nothing is safe from these broadly-drawn character traits. Farmiga’s Zoe Benson finds out she’s a witch when she has sex with her boyfriend and it kills him; another character withstands a brutal sexual assault; and more than one witch uses her sexuality to kill someone. The puritanical message of sex as danger is rampant throughout AHS: Coven’s first episode, and while it makes sense in the age-old origins of witch tales, Coven is an attempt to update the witch stories we all know. It doesn’t seem to be too much to ask that it updates a few of its social assumptions, as well.

From there, we find Emma Roberts’ former movie star as a self-obsessed, callous party girl and an obvious target for Fiona’s youth envy. Gabourey Sidibe’s witch makes late-night trips to binge on leftover chicken in the fridge because apparently it’s necessary to promote the idea that fat girls just lazily snack at all hours of the day, while Roberts' tiny actress-turned-witch comes waltzing into the kitchen demanding only healthy Greek yogurt for breakfast.

While it must be tempting to use the witchy implications on this set of supernaturals, it’s rather disappointing that Ryan Murphy and Brad Falchuck spread the detrimental female stereotypes so thickly. It’s one thing to have a villain adhere to tired tales of desperate women, it’s another to weaponize sex like a 1950s sex-ed manual. But to wash over a show like this with a rag of seeming disdain for women, who are the meat and potatoes of this spooky stew, is unacceptable.

Of course, it’s only the beginning. There is still time for AHS: Coven to turn some of these things around. Unfortunately, other items – like Fiona’s youth obsession and the condemnation of sex – are apparent mainstays in the witch tale’s plot. I’m not one to give up on a pool of talented ladies this early in the game, but let’s just say that with this show, I’m not holding my breath.