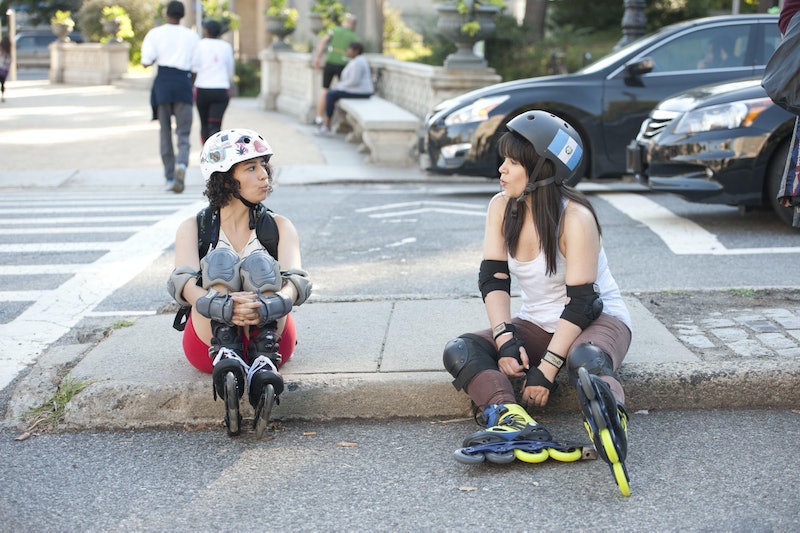 If you haven't caught on by now, Broad City's Abbi and Ilana are full of surprises. (You've met Val, haven't you?) And Wednesday night's Broad City episode "The Matrix" was no exception, which found this dynamic duo jamming out on drum sets in the middle of their very own rock concert. Of course, the entire thing was a figment of their imagination brought on by loudly testing out a music store's merchandise. (Hey, we've all been there.) But while the performance may have been fictionalized, that doesn't necessarily mean the talent was. If you recall, we saw these two performing with bucket drums way back in Season 1. Which makes me wonder: can Abbi and Ilana actually play the drums in real life as well? Come to find out, one of these ladies is the Buddy Rich of this comedy duo.

Though Abbi manages to fake it pretty convincingly, Ilana is the one who actually plays the drums outside of the show. Like, for real. During a recent interview Abbi and Ilana conducted back in January with the ladies of Sleater-Kinney, Ilana's drumming abilities were brought up, and according to both the band and Abbi herself, Ilana is pretty damn good at it. Granted, she doesn't consider herself good enough to be labeled as an outright "musician" like the women of Sleater-Kinney, but given the high praise she was receiving from all parties, I got the distinct feeling she wasn't giving herself enough credit.

With that in mind, I went back and re-watched the episode again, paying close attention to how they both looked while sitting aside those drum sets. And sure enough, you can definitely tell a distinct difference. It's clear that Ilana is right at home and really seems to know what she's doing. Of course, Abbi is rocking out pretty hardcore as well, but that has more to do with her rock star personality more so than actual drumming talent. (I'm right there with ya, girl!)

But Abbi is not without her hidden talents as well. During an interview with Thought Catalog back in 2012, it was mentioned that Abbi can draw really well, much like her Broad City counterpart. (Remember that art class of hers Ilana posed nude for? LOL times infinity!) Though, if you ask me her singing wasn't too shabby either during last week's Val debut. (FYI, you can sing me any Judy Garland song and I'll love you forever.) So once again, this just further proves there's really nothing out there that these ladies can't do.

But, let's be honest here: Whether they were going on tour or painting a mural, we would pretty much be up for watching them do anything.