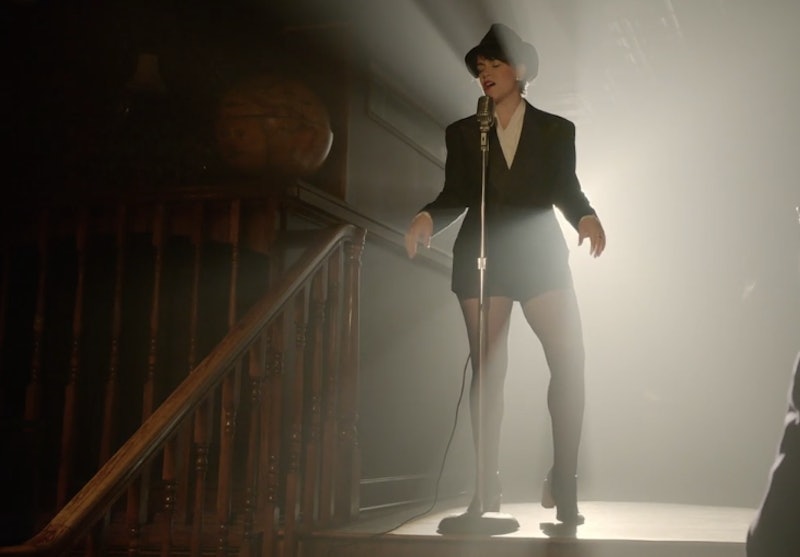 How well do you really know someone? Because based on Wednesday night's Broad City episode "Hashtag FOMO," there are secrets that can be hidden from even the closest of friends. Completely throwing Ilana (and us) for a loop, Abbi turned into her alter ego, Val — an apparent side effect of whenever she gets blackout drunk. (Though I'm not sure that I buy this is the first time Ilana's seen Abbi this wasted before.) But regardless, this little transformation showed viewers a completely different side to Abbi's personality.

Full of confidence and charisma, Val took the stage of the underground speakeasy she likes to frequent in her inebriated state and performed an impressive rendition of Judy Garland's iconic song "Get Happy!" (A solid choice, might I add.) Suffice to say, it's no wonder the crowd couldn't get enough of her. And Ilana, as you can imagine, was understandably fah-reaking out upon seeing this whole different side to her friend, which, according to the bartender, has apparently existed for over three years now. Oh, and did I mention that Val is also an amazing pool player?

That's not to say that I necessarily prefer this side of Abbi over the one we've gotten to know oh-so well. To be honest, I rather enjoy the uncomfortable situations she somehow always finds herself in. (It allows me to revel in my own unique awkwardness, OK?) That said, it is nice to know that such a person exists somewhere deep inside her. I mean, Val would have no problem confronting Trey about her desire to become a trainer. She'd just walk right up to him, show no fear, and lay it all out on the table. Not to mention that she would've totally gone after Jeremy almost immediately upon meeting him. (I wonder what Val's take on pegging is?)

But the point is, Val represents everything Abbi aspires to be. She just needs to learn to do it without using copious amounts of alcohol as a trigger. (Well, at least from time to time.) Regular Abbi extremely lovable (Bed, Bath & Beyond FTW!), but I hope this Val revelation is an indicator that our girl is going to take charge a little more and get that job (and maybe even the guy) she oh-so rightfully deserves.