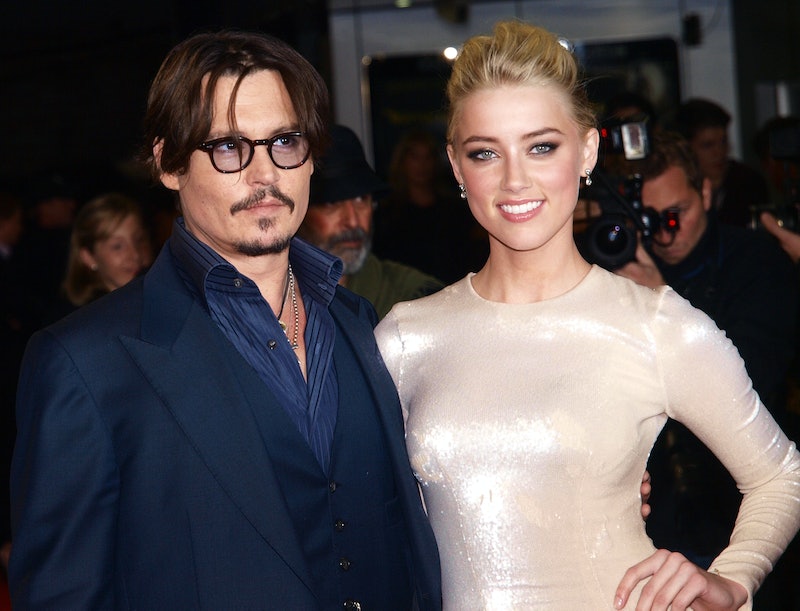 It shouldn't surprise anyone that it's incredibly hard to find actual details about Johnny Depp and Amber Heard's wedding. After all, Depp is a notoriously private dude, especially about his love life, so it's safe to assume that a wedding would definitely fall under the category of things he's not going to talk about. For that reason, it wasn't too shocking to find out that Depp and Heard tied the knot in early February on Depp's private island in the Bahamas. Simple, gorgeous, and far, far away from the prying eyes of the paparazzi. Or was it? New photos are emerging of Depp and Heard's wedding, and they seem to be taken from the sky. Obviously, someone was in a plane, snapping pics of their wedding while it was happening... and, you know, taking sketchiness to a whole new level.

However, since the pictures already exist, we might as well benefit from them. I mean, better pictures could have been obtained from an old disposable camera, but blurry pictures are better than no pictures. And frankly, I'm just glad we have evidence that this wedding actually took place.

And even from these photos that were clearly taken by a potato, one thing is obvious: It's hard not to wish you were invited to this shindig.

It happened on the most gorgeous beach ever

Do you see how blue this water is?! If Depp's willing to open up his island to vacationers, I am so there. Also, the setup of the wedding was cute and simple — chairs, flowers, and sand. Very natural, and very beachy. Did the guests even wear shoes?

It was crazy tiny

In the picture on the right, I count 22 guests, minus the wedding party and the photographer (although I could be missing a few, so this is definitely an estimate). That's a teeny number for the wedding of two people who are ridiculously popular, so it's obvious they invited only the people who are closest to their hearts.

While it makes for a small wedding, it also makes for an intimate one, which means Depp and Heard likely had plenty of time to spend hanging out with the people they love most on their special day. Also, yes, that is Depp's son back there in the cream jacket.

Not just the bride. Also the groom. And the guests, which is particularly odd considering traditional wedding etiquette dictates that no one wear white but the bride. Maybe they gave their family the go ahead in advance? Either way, it looks like it was a gorgeous ceremony. Now, I will wait patiently to find out what food was served, because that is what's important.