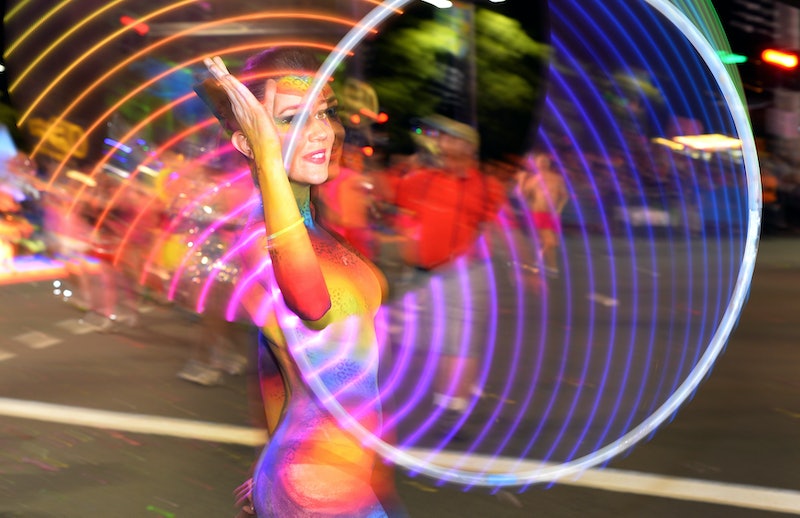 Not too long ago, one of my very best friends in the world, like a sister to me since college, left the oft soul-crushing L.A. actor grind to ultimately trade it in for the invigoratingly smooth, laid-back charm of New Orleans — and now, by all accounts, her batteries are recharged and she’s having a blast bartending and doing theatre in the Big Easy… not a bad gamble. Of course Mardi Gras doesn’t need any help getting the party started, but in honor of my BFF’s first Fat Tuesday as an official New Orleans resident, I made this perfect Mardi Gras playlist to KEEP THE PARTY GOING in all its Cajun-crunk glory!

Even if you, like myself, are far, far away from the French Quarter this year, you can still immerse yourself in all the sounds, tastes, and (duh) alcoholic bev-stylings of Mardi Gras. Or take a more academic approach to the holiday and indulge in a deep ponder over what possesses women to flash their breasts for beads... because as I always say, it’s best to combine feminist theory with about 15 to 20 shots of vodka — it really distills a highly complicated issue into something crystal clear! Ah, fun times.

Anyway, regardless of whether you’re celebrating Mardi Gras with boobs in or out, in New Orleans or waaaaay out of town, enjoy these 17 jazzy jams, channel the carnival spirit, and let the good times roll.

3. "From the Corner to the Block" by Galactic feat. Juvenile

5. "Go To The Mardi Gras" by Professor Longhair

16. "My Feet Can't Fail Me Now" by The Dirty Dozen Brass Band

17. "Drop Me Off In New Orleans" by Kermit Ruffins

Pretty great tracks, right? Get New Orleans inside you... NOW.