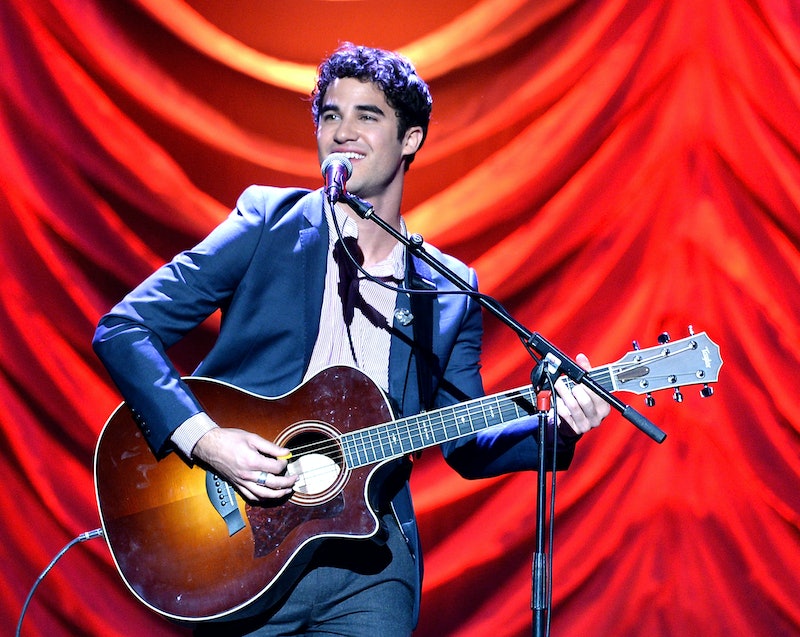 Glee is ending, and while that may be a bitter reality for so many, there's some sweetness to it, too. The biggest perk, in fact, may be that the show ending will free its many talented (and many-talented) actors to pursue other projects. Films, television, music, Broadway — get ready world, the Glee cast is comin' for ya. One example: soon-to-be-former Blaine Anderson Darren Criss is headed to Hedwig and the Angry Inch on Broadway come this April. It will be his second turn on Broadway after a 2012 turn in How To Succeed In Business Without Really Trying, only this one will involve a lot more wigs, fishnets, and glitter.

I have every confidence that Criss is going to rock his role as Hedwig — and I say that with the wisened voice of someone who's been following Criss' career since Starkid debuted A Very Potter Musical with him in the lead role of Harry Potter in 2009. Since then he's cemented his performance prowess on Glee and on tour for his own music, maturing as a performer and just generally making me yearn for a time when his schedule would allow for him to follow more of his creative whims. And here we are, with him ramping up for his Broadway return.

But how should you ramp up for his Broadway return, you ask? Well, I suggest watching these clips that prove why Criss is a performer worth paying attention to.

"Back To Hogwarts," A Very Potter Musical

I gotta start with a Very Potter Musical clip, because though Criss was a performer long before then, this is where so much of it started. He immediately nails the Harry Potter character, and that is not a small feat.

Another beginning. Criss' more mainstream breakout moment, from his first episode of Glee, breathing new life into an overplayed pop it and launching Klaine in one fell swoop.

"It's Not Unusual," Glee

In which he goes full Carlton.

"Brotherhood Of Man," How To Succeed in Business Without Really Trying

Might as well through in a li'l somethin'-somethin' from Criss' actual Broadway debut, taking over for Daniel Radcliffe (gotta love those Harry Potter ties) in 2012. I'd say that choreography bodes well for Hedwig.

"Everybody," Girl Most Likely

He's gonna be rocking a lot more eyeliner as Hedwig, but this is a start.

I mean, this one's pretty straight-forward.

The vision of him in that jacket should be reason enough to look forward to him fishnet'd and eyeliner'd and covered in glitter.

"Bring It On Home"

"Part Of Your World"

Criss really loves singing acoustic versions of Disney songs and that should never be taken for granted.

This is Criss singing in Italian. You need this in your life.

Criss and his Glee co-star Chord Overstreet singing this David Bowie song's a good example of how Criss is a rock star.

A song Criss wrote that also appeared in A Very Potter Musical. Also useful for a good cry. YOU'RE NOT ALONE.