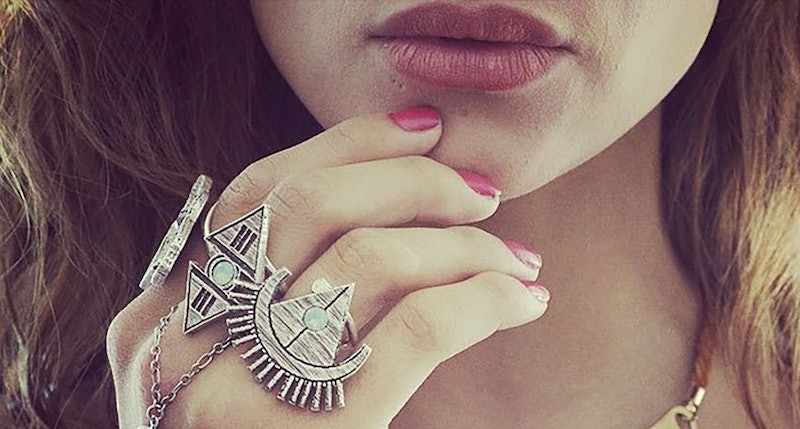 You can look at shopping as a collaborative endeavor. It's like one of those group projects they made you do in high school, but not horrible. Everyone participates by working hard: The manufacturers work hard to create a desirable product. The retailer works hard to showcase that product and make it available. And the customer (that's you!) works hard at their own job, then decides to commit the money they earned to purchasing the desirable product.

There's a lot of pushback against consumerism, against acquiring for the sake of acquiring, and that makes sense. Why accumulate more stuff than you will use? However, making a purchase is not inherently bad. Intentional, thoughtful shopping can be empowering. Commerce is a cycle of people depending on each other, a community of support, which is the best part of being human. You may not feel romantic when you buy from a "Big Box" store, but supporting independent creators and distributors is heartwarming. The personal element stays close and you get more joy per dollar. Helping to coordinate such emotionally satisfying exchanges as the retail middleman can pay off big-time. According to a Bloomberg Business guess, Etsy is worth two billion dollars.

All this to say: I'm intrigued by Colabination, an e-retailer that aims to be the connection point between designers and customers. In their own words, "Designers have a story to tell. They also have awesome stuff they wanna show you. You wanna see it [and] share it with your friends who are just as cool. Stop looking like everyone else and start bragging." It sounds like Colabination wants to be an elite version of Etsy, aimed at hip youngsters rather than their moms.

Colabination hosts a "Rolodex" of designers, from inside the U.S. and out, who offer beautiful capsule collections at premium prices. By which I mean, I couldn't afford anything. That's the problem with buying from indie designers: They cannot operate at scale and pass the subsequent savings on to their customers. As a consumer, you have to decide whether a well-made item from an individual artisan is worth the extra hours that you worked to pay for what you bought.

Most people decide that no, it's not, so they shop at H&M instead. I shop at thrift stores and buy what the H&M folks are done with. We all wear the same stuff. Hence Colabination's quip, "Stop looking like everyone else and start bragging." It's a challenge to the potential customer, implying, "Are you unique and alt, a hipster sprung straight from a Tumblr page? Then put your money where your mouth is." Anyway, the prices don't stop me from admiring. Here's a sample of Colabination products:

Is it just me or does the model totally look like Lorde? Designer Natalie Rae, located in Berkeley, California, "wanted to create a label that showed the fashion world that you can create both ethical and sustainable clothing." Her showroom on Colabination is a "dream realized." The embellished top shown above comprises a blend of organic hemp and cotton, meaning Rae does put her money where her mouth is.

Husband-and-wife brand NO&YO is also based in Southern California. NO&YO focuses on athletic t-shirts, endorsing "the outdoors, adventure, [and] connecting with like-minded people while traveling." The illustrated train tracks on this "Trestles" shirt evoke the early days of California, the rough Wild West when locomotives were cutting-edge technology. And yet the clean design keeps a modern feel.

Flea Market Girl, yet another California brand, this one from L.A., features jewelry made from a variety of metals, stones, and leather to create "looks ... from edgy to dainty, which is expected to make the quintessential 'flea market girl' feel confident in her own style." I love the contrast of the boldly golden braided strap and the iridescent blue cabochon. Cooler shades dominate the brand's collection on Colabination.

Wear Your Label is based in Fredericton, Canada. MacNevin and Reed were inspired by their "struggles with mental illness [and] experience volunteering with non-profits." A sweater emblazoned "it's okay to not be okay" is basically what I needed to sustain emotional buoyancy during middle school. I don't think my budding depressive self would have been brave enough to wear it, but it would have meant the world to me. (Not unlike Kelly Clarkson's angsty second album, My December, an inexplicably underrated release.) My current somewhat-post-depressive self would wear the heck out of this sweatshirt! Creators Kyle MacNevin and Kayley Reed of Wear Your Label explain, "We want to end the stigma that prevents individuals from seeking ... help. Guess what? It's okay to not be okay. And sometimes all we need is that little reminder."

SNAPBACK CROWN. HELL YEAH. Whitney Manney, based in Kansas City, Missouri, combines "the aesthetics of street art [with] fashion and textile design." The brand is graffiti-inspired, citing "involvement of the hand, the pace of creating new imagery and the unique quality of each motif" as core principles ported from street art to apparel design.

To summarize, there's some "awesome stuff" on Colabination, as they claimed. The website has a large, diverse repertoire of indie brands. It'll be interesting to see how the business develops and whether it succeeds in its stated goal to "change the world." Oh yeah, didn't I mention that part? Colabination tells its customers, "Together, we can change the world... or at least make it better dressed." They elaborate that "team members are constantly challenging the status quo and using their intellectual rigor in their never-ending quest toward a global evolution." That's a mighty mountain to climb, but you can't reach the top without ascending the foot hills, right?