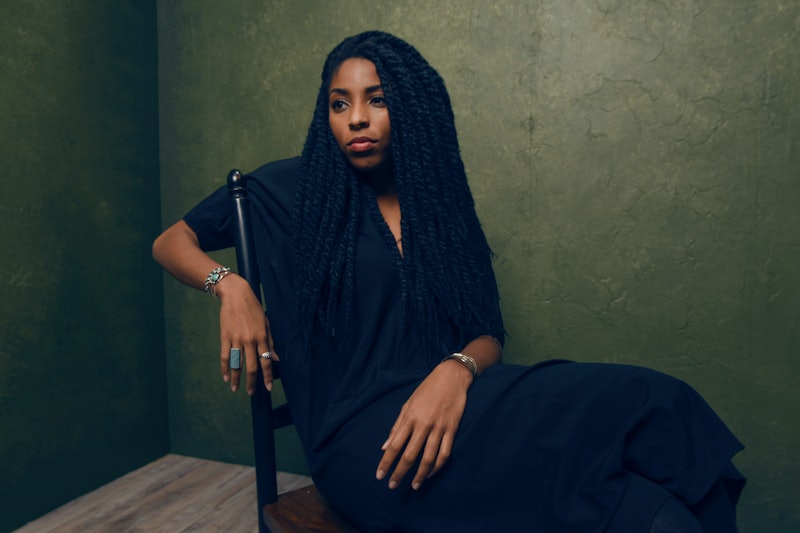 Let me start by stating that I am a quite a fan of The Daily Show's Jessica Williams. Her segments are usually my favorite part of any given episode. She's brilliantly hilarious, unabashedly committed to being an uncompromising mix of funny and smart, and loud with good things to say. I tremendously like how she does what she does, and despite not knowing her personally, I'm pretty sure I would be on-board with who she is in real life, too. And so, naturally, when Jon Stewart announced he was stepping down from his long-held post as host of the nightly news/comedy show, and the rumors started to circulate about the possibility of Williams taking his place, I got a little excited. Actually, I got a lot excited, as did every other Jessica Williams fan. Because, duh — we love her and who doesn't want more of something they love? Who doesn't want to see talented people elevated and celebrated? But as quickly as the rumors swelled up on social media, Jessica Williams quickly and clearly put them to rest, stating that she simply didn't feel it was the role for her.

Upon hearing this, I let out a little sigh of disappointment — and then I got the hell over it. I didn't join the coaxing chorus of people who immediately jumped to try and convince Williams that she was wrong and that she "could do it" and "should do it." I didn't join in with those people, even though my selfish wish would be for her to take the job because it would be entertaining for me. But MY needs aren't what drives the decision over whether or not someone takes a job, which seems to be something a lot of people on the Internet don't understand. Jessica is driving her career and really doesn't need the advice of strangers on what to do with her future. Jessica is a full-grown adult with her own goals, and her own right to decide the best path towards achieving them.

In fact, at 25 years old, Jessica Williams is having a career most of us can only imagine, something she has clearly achieved by going her own way. She's enjoying considerable success at a relatively young age — shouldn't that give us some idea that just maybe she knows what she's doing? I'm inclined to believe that, when faced with the prospect of taking this job (assuming it was ever even an option for her to take it, which it very well might not have been), she weighed out her options, used her first-hand knowledge of the work involved in hosting something like The Daily Show, and decided it wasn't a good fit for her at this time. Now, I don't actually know Jessica Williams. We've exchanged a handful of tweets, I offered to make her cupcakes and buy her a drink (THE OFFER STANDS, WILLIAMS. LET'S DO THIS), but other than that? I have no idea what her perfect future might involve. None. But I trust that she knows what she wants, and how she wants to get there.

Why is it so hard for everyone else to give her that control over her own life? Why are we hellbent on forcing people to surrender their autonomy to the fickle flow of where we want to place them in service to our own wants? We like Jessica Williams. We want her to host The Daily Show. So who cares what she wants? Let's just assume, if she doesn't do what we want, that she is scared, insecure, misguided, and a victim of internalized devaluation forced on her my society. What in the actual fuck, you guys. Maybe she just doesn't want the goddamn job.

You would think this reaction is a common one. After all, don't most of us make career decisions based off what works for us? Of course we do. Generally, we don't even have to discuss those decisions with anyone not directly impacted by what goes into our pockets. So imagine my surprise when a piece ran "diagnosing" Jessica Williams with imposter syndrome. More specifically, as a “high profile victim” of it. Because apparently, something that details how under-qualified white men go after jobs for which they aren't qualified is a guidepost for a Black woman in comedy? Okay. Comparing what's happening with Jessica Williams (which, again, we have NO real idea about; we have absolutely no concept of the landscape of Williams' career, nor the Jon Stewart replacement search) to the experience of under-qualified dude-bros frustrating their bosses with their inability to do the work they were hired to do completely neglects to consider "tiny" factors like race, gender, and class. And lest you think this was just one shoddily written offensive thinkpiece, a quick perusal of Jessica's Twitter mentions immediately after she tweeted that she would not be the next co-host show other white women rushing in to tell her that she doesn't know best what works for her life and career.

Jessica Williams absolutely needs to believe in herself and her talent in order to advance in her career. Not wanting to host The Daily Show at 25 isn't an indication that she doubts herself. It's an indication that she knows what she wants to do right now. Maybe the reason she's so damn good at her job is because she has an incredible degree of self-awareness when it comes to her abilities and experience, and goes after jobs that are exactly perfect for her at the time, that will allow her to excel, shine, be challenged, and grow. Maybe she understands her career trajectory better than we do. In fact, it's offensive as hell to assume that she doesn't. And taking the perspective on this situation that because we want her to host The Daily Show means that she should do it, for that reason, is the most deeply problematic part of this entire issue: It speaks speaks to a sense of ownership over this person, this young black woman. And make no mistake: Her identity as a black woman has EVERYTHING to do with other people's feeling of entitlement to tell her what's best for her, and what she ought to do. If she were a man, or even a white woman, and she opted to walk away from what was perceived as a highly coveted job, we would call it "brave" and "interesting" and celebrate that person as someone who clearly has other plans and is self-directed — basically, we would frame that decision in any number of positive ways if the celebrity in question was anyone other than a black woman.

Jessica Williams doesn't need to be owned and shepherded through her career. She doesn't need a group to help her “lean in” to wanting to become the next host of The Daily Show. She needs her fans to support her in whatever SHE wants to do. She needs to be applauded for having the self-awareness, prudence, and strength at such a young age to seemingly know what the fuck she's doing. She needs mainstream white feminist voices to speak up in favor of more representation and agency for women of color in the spaces that they have access to — not in ways that shame women of color for not participating in areas that don't serve the needs or goals of white feminism. That means listening to her, respecting what she says, and understanding that what you might enjoy seeing and what an entertainer wants to do can be very different things, and that's okay. If we want to talk about what Jessica Williams "needs", those are the things she actually needs. Career advice is decidedly not on the list.

Now, the obligatory apologies are already happening, and Jessica Williams has made it very clear that she is no one's project, poster child, or puppet. That's all wonderful. But what happens the next time a Black woman in the public eye makes a decision that maybe doesn't work for mainstream white feminist narratives? We've seen this with Beyoncé, Nicki Minaj, Viola Davis, and so many others. And whether it's an insistence that Black women not show their bodies as performers in order to be considered "good feminists" (while white women are lauded for owning their sexuality, á la Miley Cyrus, Katy Perry, etc.), or that they not discuss white-centered beauty aesthetics and their impact on hiring in Hollywood, we run again and again into the same problem: No matter how Black women or other WOC conduct themselves, somehow their very complicated lives and choices are reduced to single-note racist tropes. We talk so much about the patriarchy in feminist circles, but what about the matriarchy that makes some white feminists think they need to lead WOC to feminism, and then tell us what's good for us?

You want to fight for the right of women to choose? That means respecting choices that are informed by experiences that are foreign to you. It means understanding that the factors that define your reality, and shape your choices, don't represent everyone, and that your knowledge doesn't serve everyone. Fighting for women and their right to choose means supporting choices that not be the ones you would make, and being humble enough to not think that your experience is the definitive one for all women. I'm certain that “Lean in, even if you don't think you're qualified, or you aren't sure you want the job” advice can work really well for some white, upper-middle class women in media with a certain look. If you're a white woman, there's nothing wrong with letting that advice be relevant to your life — but there is SO MUCH wrong with forcing it upon women of color, thus ignoring the many, very real factors that make it inapplicable to their lives.

And honestly, even if your advice does apply to someone, they still aren't obligated to listen to it, and you don't get to be condescending if they don't. Jessica Williams has every right (as does every other woman, including those of color) to say no to what someone else thinks she should want. And that's not a reason to paint her as an "Angry Black Woman" and erase the reasons she had to say firmly, repeatedly, “no” to people who couldn't be bothered to listen to her about her own life. The matriarchy isn't a good replacement for the patriarchy, and feminism isn't supposed to be about giving some women the right to be equally oppressive.

More like this
Everything We Know About Jerry Seinfeld's Pop-Tart Movie
By Radhika Menon
5 Ways To Stand In Solidarity With Women In America From The UK
By Sophie McEvoy
How To Fight For Reproductive Rights, Based On How Much Time You Have
By Courtney Young
The 'Hocus Pocus' Sequel Finally Has A Release Date & It Makes Total Sense
By Shannon Barbour and Radhika Menon
Get Even More From Bustle — Sign Up For The Newsletter