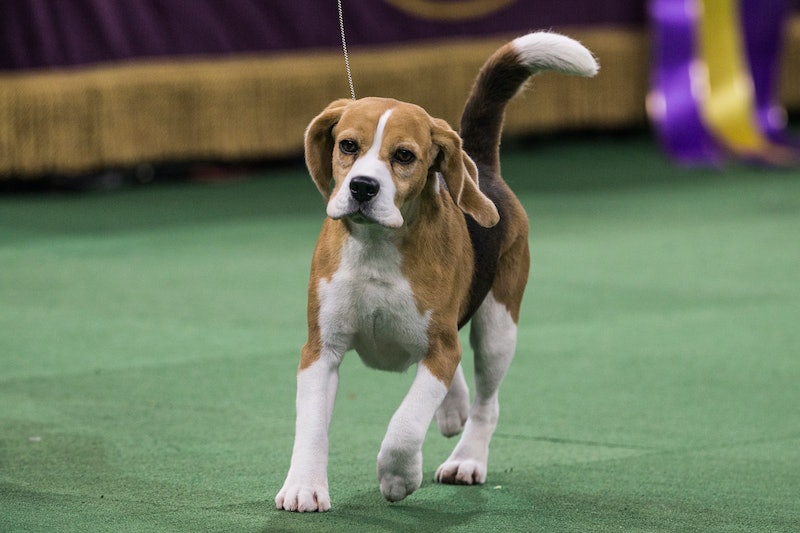 As an avid lover of dogs (and an owner of one at that!), but one without a whole lot of knowledge about the different breeds, watching competitions like The Westminster Dog Show are just a good way for me to look at beautiful canines and wish I had more puppies with which to cuddle. But on the second night of The Westminster Dog Show on Tuesday, I got the chance to learn a lot more about man's best friend, and why certain dogs take home the crown. Out of hundreds of dogs, the winner of Best in Show was from the Hound group: It was the Beagle Miss P, and I completely agree with this wining But let's be honest, we're all here to see the little furry creatures and judge them based on cuteness (there's usually a 100-way tie in my book).

The Westminster Dog Show was divided into two separate nights and seven different breeds: Hound, Toy, Non-Sporting, and Herding were judged for Best of Group on Monday night. Sporting, Working, and Terrier were judged for Best of Group on Tuesday night. From those groups, a Best in Show was chosen at the end of the competition after being examined by a separate judge who had been sequestered throughout both nights. They take this stuff very seriously. So without further ado, let's just look at all the adorable dogs already. It's really what we all tune in for, isn't it?

I just can't even with this dog. Way too cute. Definitely deserved the win in my book!

While he went by his nickname "Charlie" during the competition, his whole name is just so much better. Good Time Charlie won the award for the Reserve Best in Show which is quite the commendable consolation prize.

During the terrier judging we got to hear host David Frei talk about how terriers are the dogs we typically remember from television show like Eddie from Frasier. Frei then gave us quite the hilarious quote: Do you think Eddie gets residuals? I get a residual every time my Sex in the City episode airs." We're glad to hear it Frei. Glad to hear it.

THE Patty Hearst owns this dog, but let's not take anything away form Rocket. This toy dog is quite regal. Seriously, just look at that bow. And even most humans can pull off a top ponytail as well as Rocket. Also Rocket is a boy dog which makes his ponytail all the more impressive.

I'm not typically the biggest poodle fan but Flame is awesome. She's adorable and definitely deserved to be among the top competitors.

First things first. This dog has the best name ever. And with a face like that, I would have swagger too if I were a dog. Swagger most certainly wins for fluffiest doggy!

Spaniels are typically great-looking dogs, and Liz is no different.

David Frei was sure this dog would take home Best in Show, but honestly my heart was always with the Beagle. There's a reason both hosts talks about the Beagles being one of the most popular dog breeds around. Though to be fair, every single dog of the final bunch, including this beautiful Portuguese Water Dog, could have won in any other year.