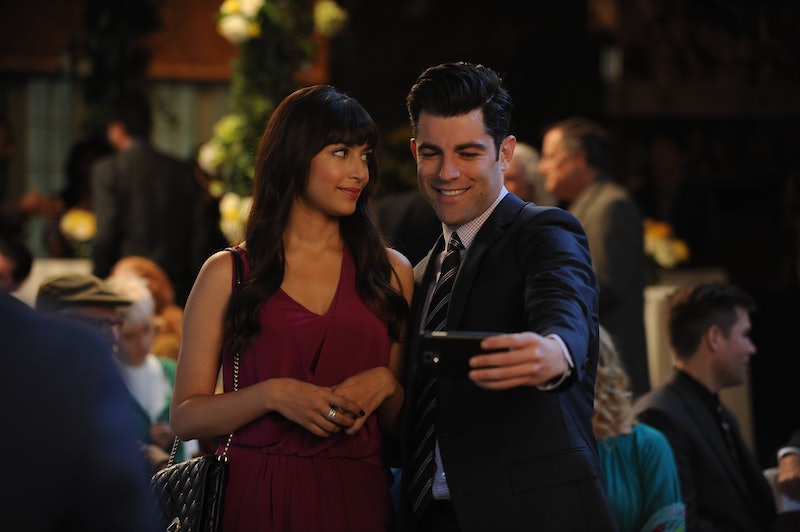 What's that saying? When one door closes, another one opens — which is exactly what could be said about Tuesday night's New Girl episode "Oregon." Now that Jess and Ryan have officially broken up (goodbye Julian Morris, I'll miss your accent!), this paves the way for a new relationship to take center stage. And given their undeniable chemistry as of late, I'd say we're looking at a potential Schmidt and Cece reconciliation in the not-too-distant future. That's right, my friends — IT'S HAPPENING! Alright, well, actually, nothing has officially happened just yet, but things have certainly taken a step in the right direction now that Cece has admitted that she's in love with Schmidt. Finally! So it's only a matter of time at this point. I mean, if a picture is worth a thousand words then the above image pretty much says it all. And I am INTO it.

When you stop and think about it, though, this entire season has been a gradual build up to restoring Schmidt and Cece's relationship. They had a beautiful, heartfelt moment together at the airport during the show's midseason winter finale and only just last week Schmidt admitted that dating Cece was the happiest time in his whole life. Not to mention that Cece has been swooning over Schmidt from afar for quite some time now, which Winston (like us) has become well aware of by now. And now she's finally admitted it.

Of course, it was a difficult realization for her to make. In fact, Cece spent the majority of the episode trying to convince Winston (and herself) that she, in no way, has romantic feelings for Schmidt. But not even the presence of her old high school crush Jake Apex (played by the oh-so-dreamy Anthony Greenfield BTW) could erase what Cece really wants, and that's some Schmidty lovin. But hey, when Max Greenfield tells you you're amazing and will never stop trying to make you happy, a girl has no choice but to practically melt right there on the spot.

Unfortunately, Schmidt currently has no idea Cece feels this way… at least for now. Plus, there's the fact that he's still dating Fawn. But I am completely confident that once he finds out (and you know that he will), he would drop everything to be with her again. Some come on, Crush Pond. Work your magic and get this adorable duo back together ASAP.