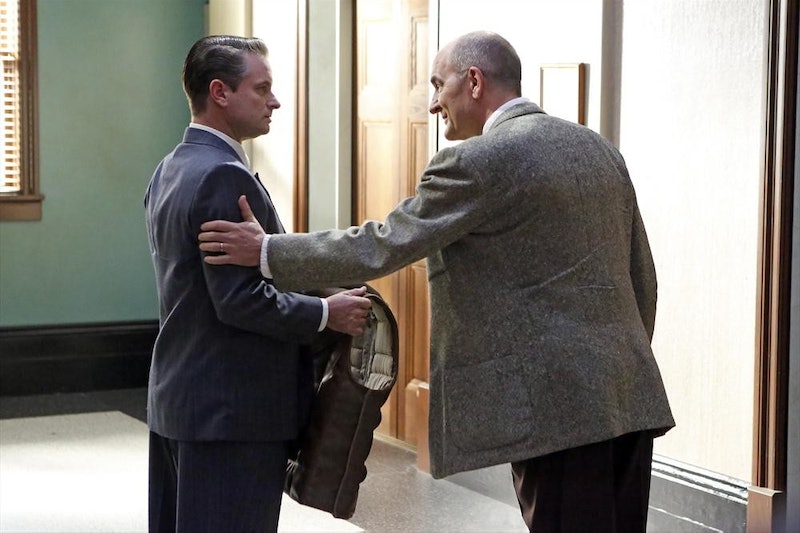 Anybody who jokes that death is meaningless in the Marvel Cinematic Universe should be watching ABC on Tuesdays. Tonight, we said goodbye to Agent Carter's Chief Dooley. After getting hoodwinked by a Leviathan doctor and locked into an explosive prototype weapon, he jumped out of the SSR building to save the others. I had a feeling he was going to kick it sooner or later. He was sharing way too many scenes with the creepy Dr. Ivchenko for my comfort level. Under his spell, Dooley directed the Doctor to the weapon he was looking for and almost gave up Steve Rogers' blood. Or did he? I wouldn't trust that the blood is safe and sound until it's tested. Dooley then drifted off into a stupor, only to be awoken as a human weapon that neither Jarvis nor the team of SSR scientists knew how to disarm. So long, Chief.

One really upsetting thing about his death is that right before he jumped, Dooley turned directly to Peggy Carter and asked her to avenge his death for him. Finally, finally Peggy's boss is taking her seriously... in his last moments on Earth. That really sucks for Agent Carter. I wonder if Agent Flynn, the SSR Officer played by Bradley Whitford in the original Agent Carter Marvel One-Shot, will make an appearance in the finale as her new, even more misogynistic boss.

We'd been hearing a lot about Dooley's doomed family life via whispered phone conversations and off-hand comments throughout Agent Carter's first season. This was the first time we got to see any of it up close, and it was too late. I almost wish that Dooley had gotten to stay in that fantasy that Ivchenko created for him.

On the other hand, am I horrible? That bomb vest that Dooley died in was so hokey looking that it was hard for me to take the whole scene seriously. The way it lit up, he looked more like he was on air traffic control.

Still, you'll be missed, Chief Dooley. You weren't the nicest, but at least you were honest about it.