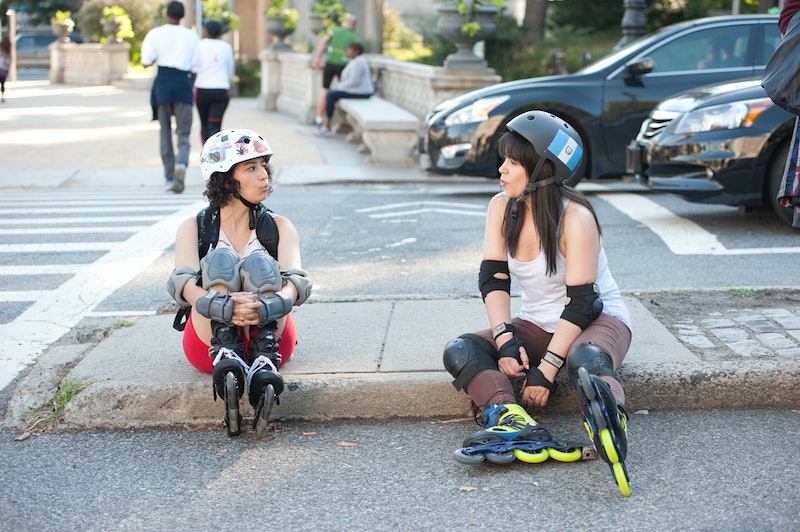 You know how some people are always afraid that we as the human race are becoming to dependent on technology to stay alive, and that in some ways we have to step away from our machines and really live life? Well it looks like Broad City 's Ilana and Abbi strongly agree with this sentiment. Only problem is they are both completely lost without the Internet. In the episode "The Matrix" from Wednesday night, Ilana and Abbi fall into the Internet "matrix" and forget that they were both hanging out with each other for the entire night. After realizing how much technology and the Internet have taken over their lives, both women rant about their dependence and decide to make a change: They will attempt to live tech free on their way to a dog marriage between Ilana's brother's dog and an adorable man's girl chihuahua. And of course, the trip does not go well.

While the whole episode and the tech-free adventure through Central Park is absolutely hilarious, the rant both Abbi and Ilana go on after their dark Internet spiral is so perfectly them. Both women have, on multiple occasions, expressed their strong opinions on serious and frivolous issues, and it's actually one of the best things about the series.

From Ilana's hilarious and sometimes insane rants about the way society views race and homosexuals, to Abbi's sweeping declarations to be a stronger person, these two women are some of the most opinionated on television right now. And it's brilliant.

This moment is really quintessential Abbi and Ilana isn't it? When the two women realize that it makes no sense for them to not be asking out men for their own sexual and emotional needs, they take control by asking out all of the people they know on Facebook. It doesn't go well, but who cares? They took charge and it's awesome.

This technically isn't a rant but their opinions and feelings toward the Upper East Side are totally spot on.

This clip is a perfect representation of Ilana's usual rants about politics and Abbi's decision to one again take charge of her identity.

The most common of Ilana's rants and accusations. Ilana frequently uses this to get people to do things for her that they shouldn't or wouldn't normally do through either guilt (which doesn't really work) or confusion (which totally works).

Ilana's Mom Does It Too

This clip just shows the start of Ilana's mom's many strong opinions and actions. Obviously Ilana's mom acts and talks this way, from where else would Ilana get it?

Maybe this is because I've spent hours going into a spiral of watching dozens of Broad City videos, but you guys, Ilana Wexler and Abbi Jacobson might just be my heroes.