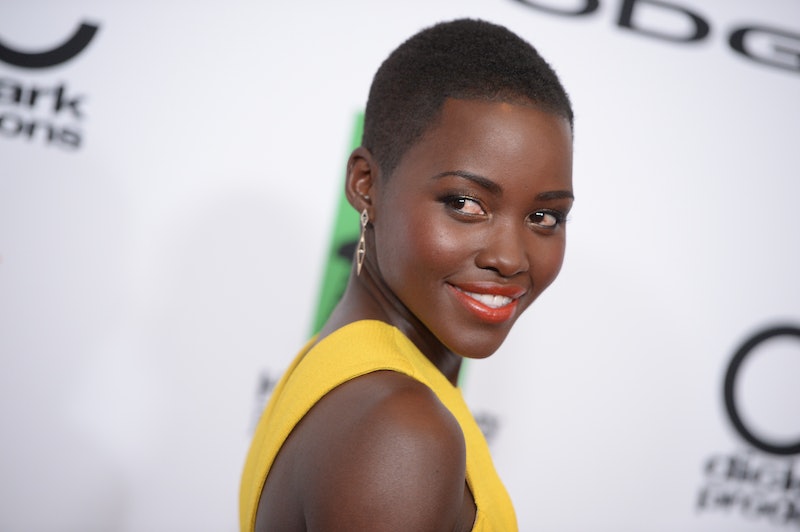 As we all know by now, the Oscars are set to happen this Sunday. This means emotional acceptance speeches, snubs, and judging red carpet fashion are all inevitable. Last year at the Oscars, Lupita Nyong'o arguably stole the show both as one of the best dressed and on stage as she picked up a coveted Best Supporting Actress award for 12 Years A Slave . Some fans might be wondering if the award show darling will be at the Oscars this year as well, considering that she is not a nominee. They will be delighted to know that this year, Lupita Nyong'o will actually be a presenter at the Oscars.

Nyong'o presenting at the Oscars this year (as is tradition for acting award winners) is a big win on several counts that should be cause for excitement. Let's start with the most obvious — the dress. In 2014, her breakout year that made her a household name, Nyong'o became a fashion force to be reckoned with. From her red off-the-shoulder Ralph Lauren gown at the 2014 Golden Globes to her powder blue deep V-neck dress at the 2014 Oscars, it's clear that Nyong'o has become one of the top names to watch for red carpet style. It'll be exciting to see what dress she chooses as a presenter.

Apart from her flawless fashion, there are a couple other big reasons why fans should be thrilled to see her on the stage once more. She will probably have exciting and interesting things to say about the nominees in an introduction speech, and she will also bring a bit of diversity to an award show that is lacking in that department.

As we can all remember from last year's Oscars, Nyong'o is fantastic at giving speeches. Her emotional acceptance speech for her Best Supporting Actress award touched on both personal and professional notes, serving as a great refresher that she would not have been able to be so successful in her career had it not been for the great pain that her character, along with countless others, had suffered in the past.

Nyong'o did an excellent job of reminding the audience that there is a deep meaning to the work that she did in the film and also tying it into her personal experiences, before ending on this inspirational note: "When I look down at this golden statue, may it remind me and every little child that no matter where you’re from your dreams are valid."

There's no question that whatever Nyong'o has to say before presenting the award to this year's lucky winner will be insightful, well thought out, and well executed, much like her own acceptance speech. She will likely be well informed on the nominees and have a lot of positive and inspirational things to say before their big moment, especially since she has been in their shoes before.

As a winner last year, Nyong'o also represented a big win for diversity at awards shows, as the list included many nods for actors and actresses of color. Though this year was a disappointment in the sense that it is the whitest list of Oscars nominees since 1998, it is a positive thing that Nyong'o will bring at least a little bit of diversity on the stage. Nyong'o is not going anywhere anytime soon, and it'll be great to see her present on the small screen before we get another look at her on the big screen in her upcoming roles.