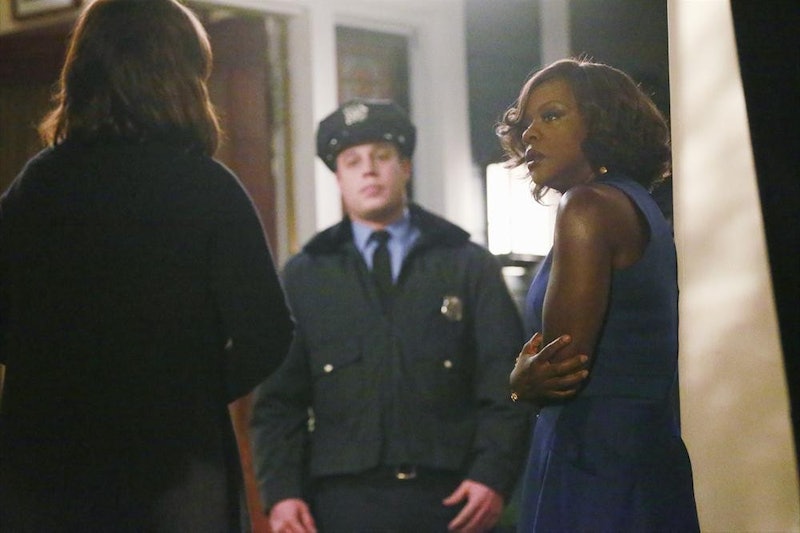 For the past several months now ABC's exciting freshman thriller How To Get Away With Murder has left many viewers wondering: Seriously, how are these people possibly going to get away with this murder? And while the heat seems to be off the Keating Five, at least for now, given Nate's recent arrest, there's still a lot about this story and the entire cast of characters that we have yet to uncover. Take our main focus Annalise Keating, for example. What do we really know about her? Yes, she's a fantastic lawyer and can handle a crisis like no other (well, except maybe Olivia Pope). But is it possible that Annalise has actually killed someone before?

Now, I know what you're thinking. That seems like a very random leap to make about someone we still know very little about. However, if you look at all the facts together, it's really a pretty valid assumption to make. She may not have been Sam's actual killer in the end, but I have no doubt in my mind that, if push came to shove, she would've been able to do the deed if necessary. Not that she would enjoy it or anything. No, despite the strong and hard demeanor she tries so hard to portray, we know this woman is (probably) not a cold blooded killer. But that doesn't mean she hasn't been in this type of situation before.

During last Thursday's episode, aptly titled "She's a Murderer," Sam's sister, Hannah Keating, became utterly convinced that Annalise was the one responsible for Sam's death. In fact, when trying to convince the police to search the house for evidence proving as much, Hannah made reference to Annalise's "violent past," insinuating that she experienced both violence and abuse as a child. I have to admit, I found this little piece of intel very interesting. As we all know by now, nothing is randomly done on this show and almost every bit of dialog serves a very distinct purpose. So it's logical to conclude that Annalise's troubled past will, in one way or another, serve as a connection to present day events. Like murder.

Did her father beat her mother? Did he beat her as well? Or was her mother the cause rather than the victim? Of course, we'll be able to get a better idea of Annalise's background after this week now that mommy dearest — in the form of Cicely Tyson — is coming to town. Speaking of which, anyone else find it very telling how, in the promo, Annalise's mother immediately asks her daughter if she's guilty of killing Sam? What would make her jump to a conclusion like that so quickly if Annalise hasn't already exhibited similar behavior in the past?

Granted, this is all mere speculation at this point, but if there's one thing this show has made abundantly clear it's the fact that Annalise is full of surprises. Just when you think you know her next move, she completely blindsides you. Plus, this is a Shonda Rhimes show, people! Nothing is off limits, especially when the subject in question just so happenens to be an expert in knowing exactly how to get away with murder.