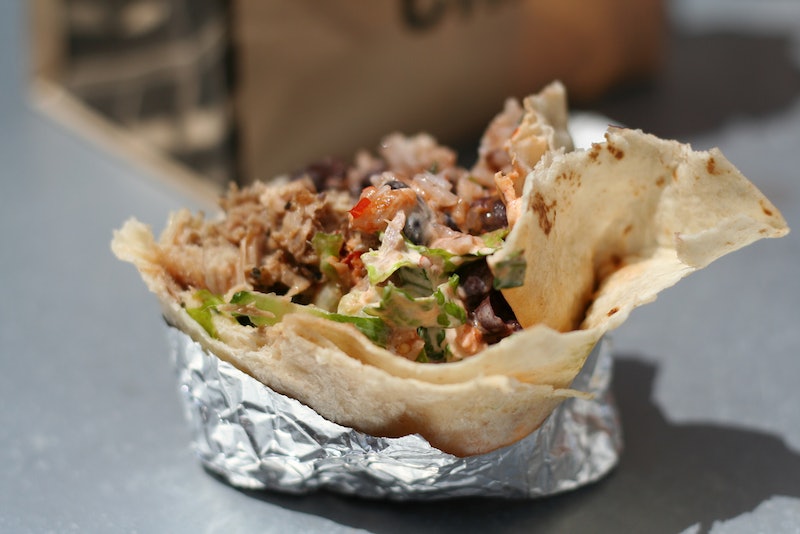 There are times when science tells us really cool, unexpected things that we never would have otherwise known — and then there are times when really, the analysis just tells what you could really figure out on your own. For instance, The New York Times wants us to know that Chipotle burritos are actually rather unhealthy. Gee, who would have guessed that eating a burrito the size of your head might not be the best thing for you? At least there are plenty of other healthier options at the beloved Tex Mex chain — as long as you're smart about what you order.

Apparently "a meat burrito with typical additions: cheese, salsa, lettuce, sour cream, rice and beans" is more likely than not to pass the 1,000 calorie mark. There are plenty of potential meal combinations that fall into the far more healthy range of 700 calories or fewer, but almost all burritos are going to surpass that threshold for the simple reason that the tortilla alone is 300 calories. So if you're looking to keep the calorie count down, burrito bowls are a good place to start.

You can check out the New York Times' full break down here, though it's worth pointing out that their analysis focuses almost exclusively on calories. And, of course, there's more to health than calories. Plus there's the fact that, yes, although it is undeniable that eating a 1,000 calorie meal isn't the healthiest thing you could do, it's not as though most restaurants' huge portion sizes are a secret.

So what are some other totally redundant things that scientific analysis can tell us? Well, here are five examples.

According to research, higher student loans are linked to more stress and to worse mental health in general. Really? You don't say!

2. Humiliation is the Worst

Researchers at the University of Amsterdam have been kind enough to tell us that humiliation is the worst human emotion. Because apparently we couldn't work that one out on our own, I guess.

Apparently, love is less of a constant, ongoing thing, and more about short bursts of lovey-dovey feeling. So everlasting love isn't really about continuous emotion. This fact will come as absolutely no surprise to people who are "in love," but also spend most of their time experiencing other emotions and, you know, living their lives.

4. Sleep is Good For You

There are about 8 million studies about all the benefits getting enough sleep can give you, but the feeling of waking up after a full night of rest is probably already enough to convince people.

Peeing in the pool is not only gross, but bad for you, according to science. But you should really not need to be told that.