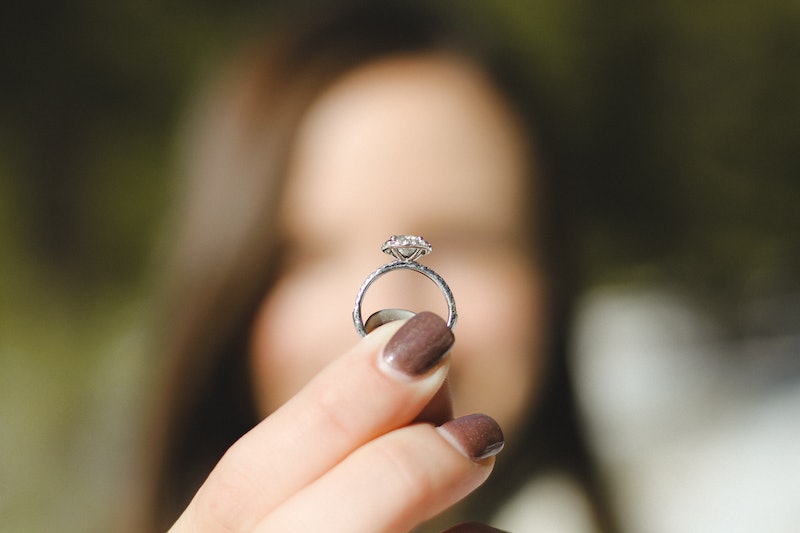 The story of Charlie Zampieri and Jessica Bennett has captured much media attention in Canada. The two met online, were engaged in 3 weeks, and broke it off after 20 months. Now, Zampieri is suing is ex-fiance to get the $16,500 engagement ring back. Zampieri is arguing that the engagement ring is part of the marriage contract that Bennett broke, and not a gift. Now the Canadian courts have to decide if an engagement ring is gift or a symbol of a contract.

The latest engagement ring trends just complicate the question further. If women are splitting the cost of their rings, or even buying it themselves, then it is not a gift, or part of a contract because the exchange is uneven. If I pay for half of my engagement ring, the rock becomes less of a symbolic contract and more of a subsidized statement piece (the statement being: I’m engaged).

Historically, engagement rings had a very clear purpose: to claim property. Once a woman had a ring, she was part of the contract made between her and her fiancé’s family. According to a recent article:

The custom of laying down an engagement ring was something rich people did in an era when marriage was recognized for what it really is: a business contract.

Then, engagement rings functioned as a sort of retainer — a lease-a-womb scheme, if you will. The unspoken part of the deal was that an engagement often allowed for a sampling of the goods.

A broken engagement was like a business deal gone bad: there were economic consequences and the injured party (the woman, who was acknowledged to be more vulnerable) was entitled to compensation.

Basically, the diamond ring used to be collateral for women because if her wedding was called off, she would be damaged goods. In this context, Zampieri is right that his ring was part of a contract, but Bennett is also right to keep it after they broke up. The antiquated origins of this contract are so incredibly sexist and irrelevant, how can we determine the modern symbolic value of an engagement ring?

Now that pre-marital sex is common and women are financially independent, a broken engagement is no sweat off our backs. Even the fact that women are now buying and helping pay for their own rings shows that this sexist tradition is no longer needed. And yet, it is so engrained in our culture that the likelihood of engagement rings going out of fashion is slim to none. Just like white wedding dressed and fathers giving away daughters, the engagement ring’s prominence in wedding customs proves that patriarchal customs are alive and well.