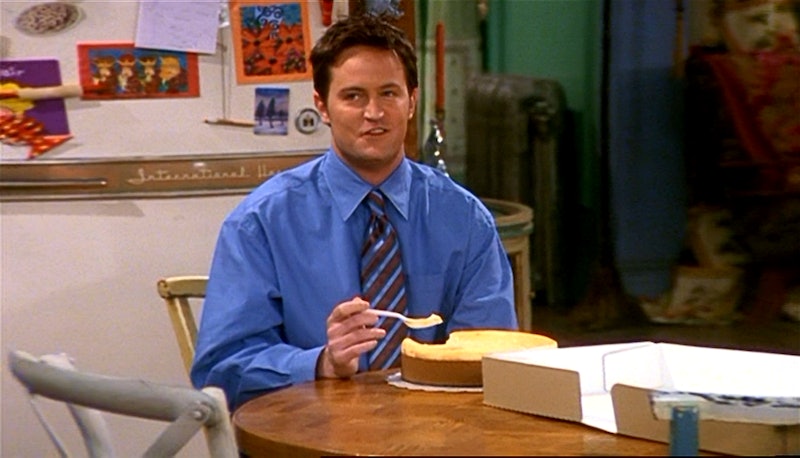 As a nearly lifelong fan of Friends, I couldn't imagine anyone else playing any of the original cast. I think the massive success of the show absolutely depended on the chemistry between those six actors, and if any one of them had been miscast, Friends may not have been the phenomenon we know it as today. Unbeknownst to the world, though (until now, of course), that actually almost happened. While visiting Late Night With Seth Meyers on Tuesday, Matthew Perry revealed he almost missed his Friends audition because he'd already committed to another show — and the other show, which never actually came to be, was a total disaster.

How bad of a disaster? Oh, honey, you have no idea. The show was about LAX airport in the year 2194, with aliens and everything. And Perry was already tied down to play a baggage handler. An alien baggage handler role almost made Chandler Bing never happen. Just let that sink in for a moment, because it is truly horrifying. Could you imagine a world where Chandler was played by anyone else by Perry? It's blasphemous even to think about it.

Fortunately, though, LAX 2194 — which would've featured Perry sorting out luggage belonging to aliens "played by little people," folks — never came to be, which freed Perry up to audition for Friends.

"Finally, somebody at Fox at the time said, 'We've seen this. It's the worst thing we've seen in our lives. He is available. You can hire him for your little show called Friends Like Us," Perry said.

But if that hadn't happened? Perry never would've been Chandler, and there are so many reasons why that would've been a terrible idea.

Who else could pull off that much sarcasm?

A big part of what makes Chandler so funny is Perry's comedic genius. Yes, the writers have a lot to do with it, and any actor can memorize lines. But what Perry did with them made Chandler a character you wanted to root for (and laugh at), as self-deprecating as he is. I don't think anyone else could've made a regular guy with a pretty boring job so endearing and interesting.

The Friends writers decided to put Monica and Chandler together because of the chemistry between Courteney Cox and Matthew Perry. Had Chandler been played by anyone else, that chemistry might not have existed, and we'd be living today totally oblivious to the fact that we'd been robbed of one of the greatest love stories of our time. Who knows what chain of events that could've set off? It could've caused the universe to implode.

And the Joey/Chandler bromance wouldn't have been nearly as endearing

AKA the impossible standard for which all future friendships will be held to for anyone who watches Friends as religiously as I do. Would Joey and some alternate universe Chandler have been so close? Would they have been bracelet buddies? I don't think so.

And we certainly wouldn't have the Chandler dance

Who even wants to live in that kind of world?