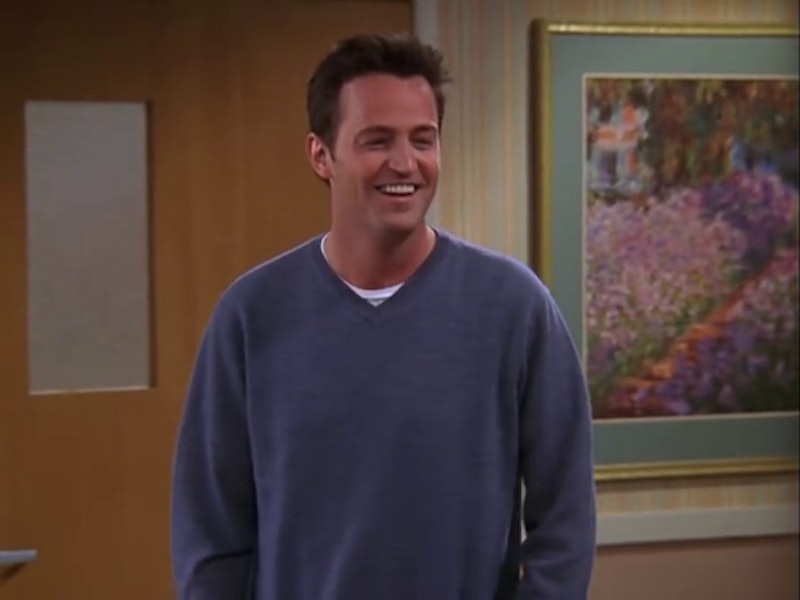 Believe it or not, Matthew Perry — who breathed life and laughter into the beloved Friends character known as Chandler Bing (or rather, Miss Chanandler Bong) — turns 45-years-old on Tuesday, Aug. 19. And while that information is bound to make some of us feel slightly old, it also gives fans (like myself) an excuse to harken back to those good old Central Perk days and remember all of the many ways Perry was there for us just as we were, and always will be, there for him.

Full of punchy one-liners and enough sarcasm to fill an ATM vestibule (even with Jill Goodacre inside it), Chandler became an instant favorite of mine, despite the fact that I still can’t quite figure out what the hell his job used to be. (Are we entirely sure "transponster" isn’t actually the right answer?) And though the show itself has taught us many wonderful lessons throughout its 10 year run and beyond, Chandler has proven — in my opinion, at least — to be the most relatable Friends character of the bunch. So what better way to commemorate Perry’s birth than by recalling all those times the Chan-Chan man really seemed to just "get" us? Could this post BE more nostalgic?

When He Had Serious Doubts About His Love Life

Hey, we’ve all been there.

When Pie Became His Top Priority

Chandler, like us, wasn't going to let a little thing like being full get in the way of enjoying something so delicious. Power through the pain, my friend!

When His Seduction Skills Fell a Little Short

We all try to be sexy… but sometimes it just sounds a lot better in our heads.

When NYC Transportation Got the Best of Him

When He Realized Honesty Is Most Likely the Best Policy

Laughter is not only the best medicine — it can also be the best silence filler.

When He Confessed Too Much Too Soon in a Relationship

When He Felt the Crippling Fear of a Career Change

Every single person has had this thought at one point in their adult life.

When He Went On This Interview

Some things are meant to be kept sacred… like emails and your fastest time scores on Minesweeper.

When He Recalled His Previous Relationships

Don’t worry, Chandler. We love you.

When He Felt Intimidated By Another Person's Good Looks

Especially when that person is Brad freaking Pitt.

When He Felt Trapped in a Relationship

OH. MY. GOD. Situations like this can be the absolute worst. Helpful tip: Just tell them you’re moving to Yemen and they should back right off.

When He Needed Some Serious "Me" Time

The warm water… the bubbles… what's not to love?

When He Explored the Murky Waters of Internet Dating

Ah, the joys and dangers of the Internet. Sometimes the people you meet seem really cool and you're 85 percent sure they aren’t an actual serial killer. Then other times, like in Chandler's case, they turn out to be your ex. (Awkward.)

When He Felt Ignored

Well, superheroes are all the rage these days.

When He Tried Cutting Down on Expenses

When He Too Felt Frustrated With Ross and Rachel’s On-Again, Off-Again Relationship

You're simply the best, Chandler Bing. Don’t ever change.

More like this
'Friends' Creator Marta Kauffman Opened Up About Misgendering A Guest Character
By Grace Wehniainen
Jesse Tyler Ferguson Had A Funny Run-In With A Fellow ‘Modern Family’ Alum
By Grace Wehniainen
“The Door Is Always Open” For Another 'Breaking Bad' Spin-Off, Says AMC Boss
By El Hunt
Who Is Liam Neeson's Character In The Obi-Wan Kenobi Finale?
By Kadin Burnett
Get Even More From Bustle — Sign Up For The Newsletter