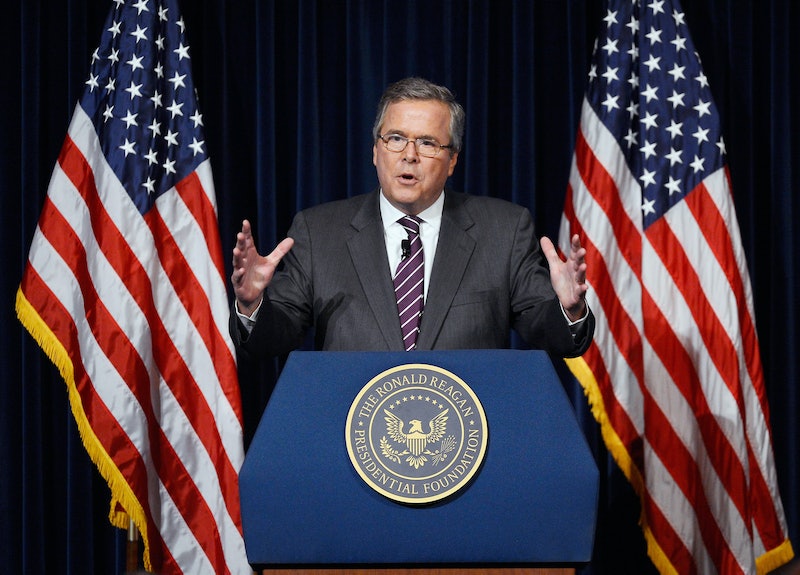 It's tough running for president when both your father and brother have held the job. Nobody knows this struggle better than Jeb Bush does; he's been forced to answer a lot of questions about his family, particularly when it comes to global affairs. On Wednesday, Jeb talked about foreign policy in a speech at the Chicago Council on Global Affairs.

In terms of his family impacting his policies, Jeb said:

I love my father and my brother. I admire their service to the nation and the difficult decisions they had to make. But I am my own man, and my views are shaped by my own thinking and own experiences.

But he knows that his words won't necessarily undermine all of his critics:

My views will often be held up in comparison to theirs – sometimes in contrast to theirs.

Prior to the event, Jeb said to reporters that he would not be "re-litigating anything in the past," but that his talk would focus on the future of foreign policy. It's probably wise for him to avoid any discussion on the wars in Iraq or Afghanistan. However, we do know that during George's presidency, Jeb did express support for military engagement in the region.

Under this administration, we are inconsistent and indecisive. We have lost the trust and the confidence of our friends. We definitely no longer inspire fear in our enemies.

We know that he holds a more hawkish outlook, though that's not uncommon among Republican nominees (unless you're Rand Paul). But that doesn't mean he doesn't believe in exercising caution. Jeb said last week at the Detroit Economic Club:

We have to be engaged, and that doesn’t necessarily mean boots on the ground in every occurrence.

Maybe this will calm suspicions about him adopting a foreign policy akin to, you know, George.

Specifically, Jeb talked about the administration's handling of Iran:

We can assume that Jeb, if elected, won't be keen on lifting economic sanctions against the diplomatically embattled nation. Nor is he interested in pursuing diplomatic relations with Cuba:

The notion that somehow you’re just going to have freedom outbreak in Cuba, I think it’s false.

Last week, Jeb appointed his top foreign policy adviser, which might indicate that he falls closer in line with his father's more pragmatic approach to international intervention. But not everyone is convinced — check out The Washington Post's Venn diagram of where Jeb's foreign policy advisers come from, most of which played some role in George's administration.

On Wednesday, Bush said: "If we withdraw from the defense of liberty elsewhere, the battle will come to us anyway" — indicating that he is not opposed to military engagement, but we still don't know under what conditions he thinks action is justified. Wednesday's speech was really a teaser trailer of the policies he will likely talk about more in-depth as he formally decides whether he will run for the nomination.