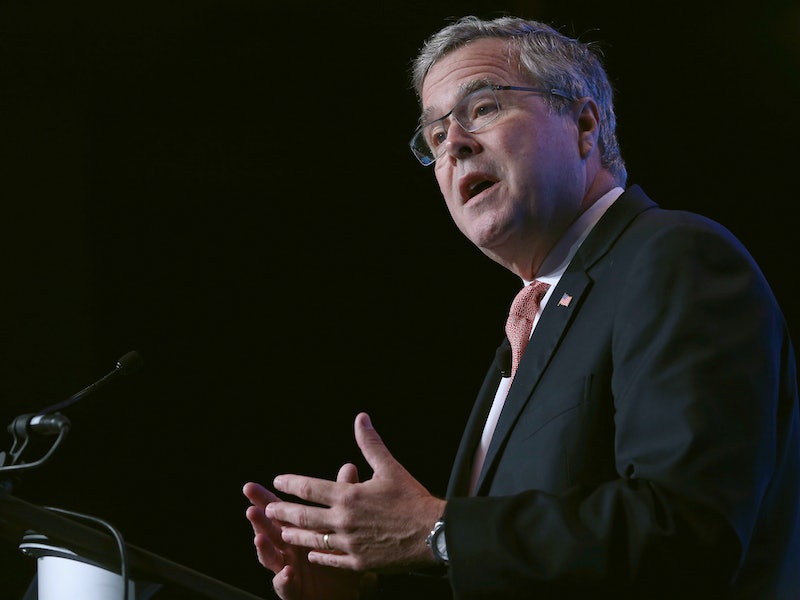 For better or for worse, Jeb Bush has a last name that resounds with Americans. He is unique among the GOP field of wannabe presidents. Described by aides an "ideas junkie," Bush is pragmatic, interested in policy solutions over the game of politics. He likes to send questions to think tanks at all hours of the day. An example — What are the top five ways to achieve four percent economic growth? But unfortunately for Jeb, the name Bush reminds many of the policies of his brother George. Thing is, the two may share a name, but not an ideology.

Arthur Brooks, president of the right-leaning American Enterprise Institute, has called Jeb “a top-drawer intellect" — pretty stark from the reputation of his brother, the commander-in-chief everyone you know makes fun of. George falls into the neoconservative thought of Republicans — you might even say he's the poster boy — which is an ideology largely associated with the promotion of democracy abroad through the use of force. This brand of conservatism can be seen as viewing the world in terms of black and white. There isn't much room for gray area.

But Jeb is a pragmatist. He isn't shy about questioning what is complex. As described to the New York Times by former White House press secretary, Ari Fleischer: "Jeb is very much a policy wonk and comes across that way," as compared to this brother George who “was much more big picture, strong leader, defined things in immediately clear moral terms.”

As governor of Florida, Bush was known to read the entirety of lengthy bills, mastering an understanding of project specifics. He's a details guy. He questions everything.

In an interview with the NYT, Philip K. Howard remarked on Jeb:

In all of my dealings with him, he’s interested in how you make government deliver effectively. What are the incentives? How do you hold people accountable?

When looking at how Jeb approaches policy, it's easy to tell that he wants to know the implications. Post-Sept. 11, the Bush administration arguably observed the world in terms of good and evil, leading the invasions of Iraq and Afghanistan without international support — a policy much different from the father's cautious approach, pursuing broad international coalitions to combat rogue actions.

Jeb's appointment of Meghan O’Sullivan as his top foreign-policy aide indicates he is not akin to his brother, but perhaps more like his father. Though she's associated with the administrations of both Bushes, she pushed for a more diplomatic approach, arguing for economic sanctions over military engagement.

During an appearance at the Detroit Economic Club last week, we got our first preview of Jeb on foreign policy as he was questioned about U.S. action against ISIS.

We have to be engaged, and that doesn’t necessarily mean boots on the ground in every occurrence.

But he doesn't doubt the role of America on the world's stage.

The United States needs to lead. Lead with humility. Lead with respect. But lead…. Nothing and no one can replace American leadership.

Jeb will deliver his first foreign policy speech to the Chicago Council of Global Affairs on Feb. 18 where a more comprehensive stand will be unveiled.

If you ask anyone if they're much like their siblings, you are most likely to get the answer "no." Jeb is not his brother. He should be treated as an individual in the race, and assessed on the merits of his policies.