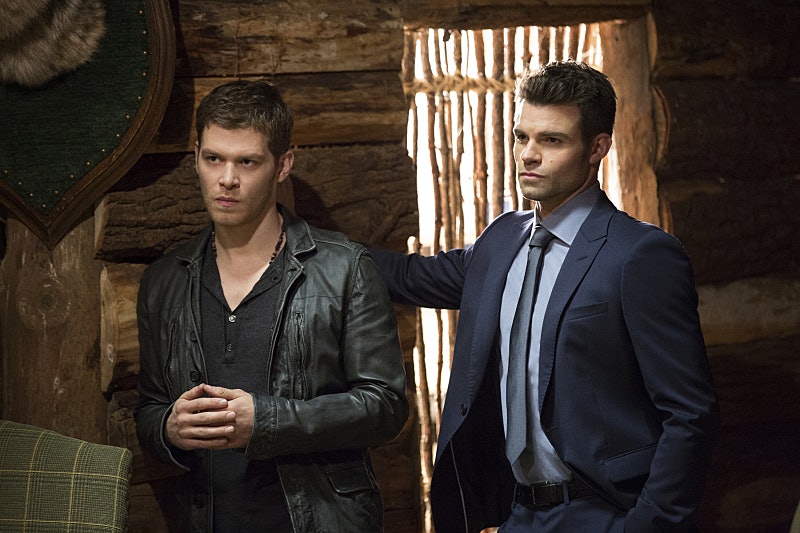 It was a glorious day back in August when Julie Plec announced that a Vampire Diaries and Originals crossover was in the works. But just as the saying goes, if you give a vampire fan a crossover cookie, they're going to want a glass of milk. (Nailed it.) The point is, the more I see these two shows intertwine, the more I want to see it happen again and again. It's not as if I don't enjoy each series as its own separate entity, because I totally do. But when you've got such rich histories and strong character connections like these guys, it's hard not to want to see the two worlds collide with one another. So does that mean there will be another TVD and Originals crossover in the not-too-distant future? From where I'm sitting, the odds are not only possible, but highly probable.

During a recent interview with JustJared, Joseph Morgan, who plays Original vamp bad boy Klaus Mikaelson, said he's confident there will be another crossover at some point, given that it's such "a wonderful opportunity." And while yes, he's well aware that the idea of Caroline visiting The Originals in New Orleans has become a fan favorite suggestion (#TeamKlaroline4Eves), Morgan actually has another TVD character in mind when the next crossover opportunity arises: The actor expressed his desire to see none other than Enzo make his way to the French Quarter for a little bit of vampire mischief.

"It might be nice to see another character that I don’t have a history with," Morgan explained. "I like Michael Malarkey, who plays Enzo on Vampire Diaries. I’d love him to cross over just ’cause I’d get to spend more time with him then, he’s a good bloke."

And I have to admit, it's not the worst idea in the world. Truth be told, Enzo's entire story arc has been pretty much a flop these days. I mean, his reasons for hating Stefan are pretty lame and has made what once used to be a very likable character come off as extremely annoying. Like, it's gotten to the point where I audibly groan every time he's on the screen. So bringing him over to The Originals could be just the thing to help revitalize his entire persona.

It'd be pretty great, actually. Enzo has the kind of "act now ask questions later" approach that would fit in well among the craziness of the Mikaelson clan, especially now that Freya and Dahlia are being slowly brought into the mix. Then there's the fact that Enzo could catch Klaus up on everything that's been going on in Mystic Falls since his last visit. Perhaps once he learns that things between Stefan and Caroline are heating up, it will prompt him to make a surprise visit of his own. (Hint, hint. Wink, wink, writers.) Also, accents! I firmly believe you can never have too many British accents on one show. It's just impossible.

I mean, I'm not gonna lie — a full-blown Caroline crossover would be the ideal scenario here. But if Enzo is what it's going to take to make another crossover attempt happen, then I'm all for it. Baby steps, Klaroline fans. We'll get there eventually.