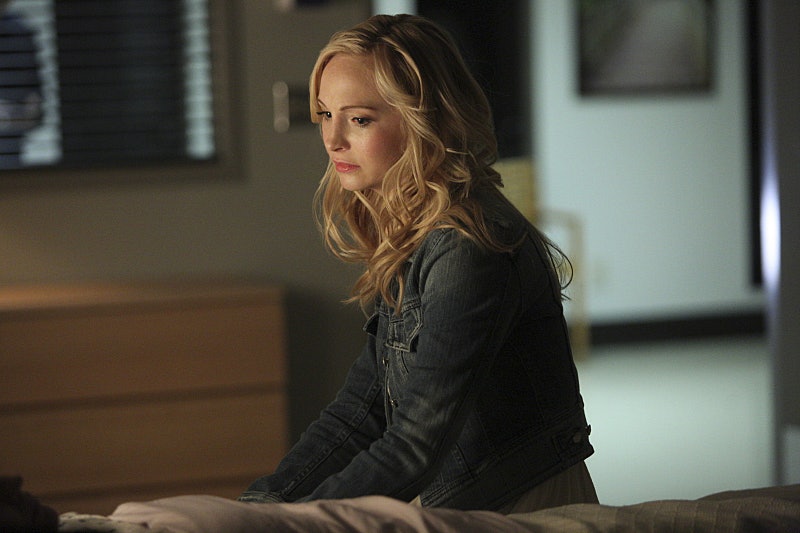 While I'm sure some of you are still riding the romantic high from that epic Steroline kiss, there are others out there (namely me) who are still holding out hope that someday Klaus and Caroline will once again reunite — perhaps even in New Orleans. Look, it's not that I didn't enjoy that kiss between Stefan and Caroline because I did. In fact, I'd be lying if I said I didn't re-watch it one or two (OK, more like five) times. But I've been hoping to see TVD 's Caroline crossover to The Originals for quite some time now. So unless I pull an Elena and get compelled otherwise, my feelings for these two as a couple can't be expected to just disappear after one kiss with a handsome Salvatore brother, I don't care how amazing his hero hair is.

It's also important to take into consideration the fact that Sheriff Forbes' death — as sad and utterly heartbreaking as it was — provides our beloved Miss Forbes with a very big opportunity. Now nothing is tying her down to Mystic Falls. She once told Klaus how she'd never really been anywhere before outside of her hometown. That doesn't have to be the case anymore. She could travel the world and maybe just so happen to find her way over to the Big Easy for a little steamy rendezvous with her favorite Original Brit. Those forests out there are looking pretty lonely these days…

But since a spontaneous trip around the world seems a little too out of character for this control-proned vamp, I've come up with a few more plausible (and plot-focued) scenarios that could find Caroline right in the heart of the French Quarter.

Since Bonnie is still trapped in an alternate dimension of 1994, I'd say this would be as good a time as any to oh, I don't know, ask the most powerful supernatural family in the world for some help? Seriously, why has no one thought to inform the Mikaelsons about Bonnie's predicament? Even if they didn't want to leave New Orleans to help, I'm sure they could offer up some useful intel on how to possibly get her back. All Caroline would have to do is ask nicely, maybe even shed a few tears and Klaus would immediately come to her aid — guaranteed.

She Fights With Stefan

Even immortals can sometimes act like teenagers. Perhaps after their romantic kiss, Stefan starts having second thoughts about taking their friendship to the next level, so Caroline, in anger, pulls a Stefan and runs away from the problem. And who better to run to than the sexy vamp who has never wavered on his feelings for her? Klaus would welcome Caroline to New Orleans will open arms — and the rest, as they say, would be history.

She Gets Bitten By a Werewolf… Again

When in doubt, a werewolf bite is always a surefire way to earn some face time with Klaus, whose blood, if you recall, is the only cure. Though there don't seem to be any werewolves hanging out in Mystic Falls these days, there's always a chance one could pop up at some point and attack our lovable vamps. Heck, I'm still convinced Tyler will eventually become a werewolf again. Wouldn't it be fitting if his bite once again inspired another beautiful Klaroline moment? It's the scene that kicked off a thousand 'ships and could be the very thing that set this romance back in motion.

She Finds Out About Klaus' Baby

With more and more people finding out about Baby Hope, it's only a matter of time until word reaches Mystic Falls that Klaus has a daughter. If, for no other reason, Caroline would vamp-speed her way down to New Orleans just to scold Klaus for keeping this from her. I mean, just think of the baby shower she could've thrown them!

She Turns Off Her Humanity

Then, of course, there'a always the possibility that the death of her mother becomes too great and she decides to turn off her emotions entirely. Having no feelings to tie her down, she could decide to pay Klaus a visit and take him up on all of those offers he promised her at graduation. It's not exactly the most healthy way to deal with grief, but I gotta admit, I would absolutely love to see Klaus interact with this free-spirited, unemotional version of Caroline. And if this happens to lead to an eventual hook-up, who am I to complain?