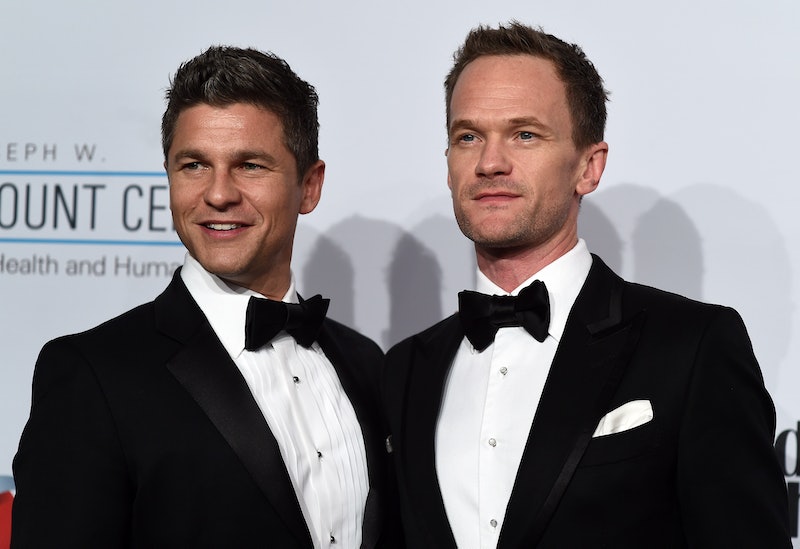 Burtka and Harris recounted the whole story in the January 2012 issue of Out magazine. At the time that they met, Harris — who is hosting the 87th Annual Academy Awards this Sunday — was in the midst of the twenty-something single person blues. "I remember being in my mid-twenties, lying in bed thinking... that the rest of my life would be solo." I'm sure that sounds all too familiar and if it doesn't you're SUPER lucky. As for Burtka, in the interview he remembered being in a long-distance relationship that was waning at the time.

One day, Harris went to meet up with his friend Kate who was with an extremely handsome stranger — a "brooding, James Dean–type guy in a leather jacket" as NPH puts it, who was obviously Burtka. After mistaking him for Kate's boyfriend, Kate responded that her handsome friend wasn't straight, but had a boyfriend.

On the flip-side, Burtka remembers running into Harris on the street and, being familiar with his work, introducing himself. "I thought it would be nice to know him, but I didn’t think in a million years I’d start dating him." In an interview with Vulture, Burtka identified the exact location as 9th Avenue between 44th and 45th Streets in NYC. JUST in case you wanted to go sight-seeing.

Although they orbited each other for a while, the first time they legitimately hung out was at a viewing party for one of the most romantic shows of all time — American Idol. As Harris remembers in the Out piece, he was totally nervous, but still felt like the person he was into was almost magical:

I was always around when he was around, hoping the stars would align. When we all hung out for the first time — I was invited by Kate to an American Idol viewing party — I just stammered around him. I couldn’t take my eyes off him. There's something almost kinetic about him and his being.

As David told Out, they first began hanging out platonically, but then things evolved:

I ended up breaking with my boyfriend, and a week later, Neil and I had a date... We started hanging out every single night, and after three months, it was just non-stop. We talk on the phone at least eight times a day and text at least 25 times a day.

And the rest, as they say, is history! In 2010, the pair welcomed to fraternal twins through a surrogate. And after nearly 10 years together, the pair tied the knot in September 2014. Let this be a comfort to all romantically challenged twenty-somethings: your NPH or David Burtka is out there somewhere waiting for you!! Preferably, they are hanging out with your mutual friend, wearing a leather jacket.