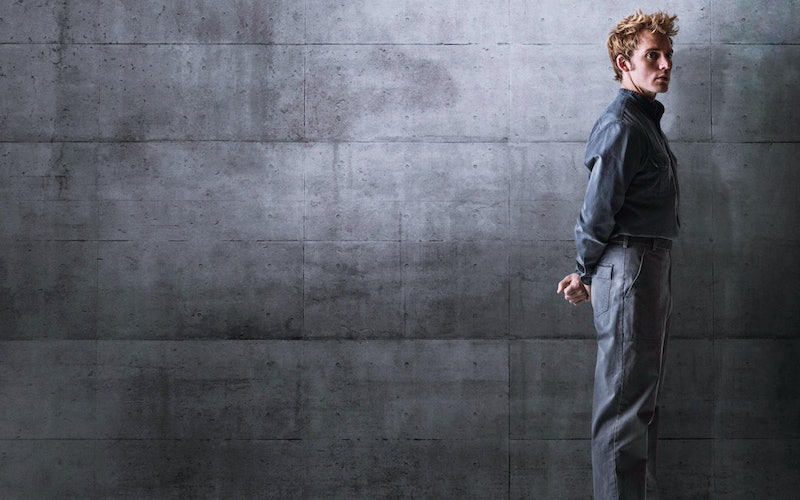 After that cliff hanger in Mockingjay - Part 1, all the fans are waiting in anticipation for the fourth and final installment of The Hunger Games franchise, Mockingjay - Part 2 — and wondering where our favorite characters will be when the movie begins. When we left Finnick Odair in District 13, he was just reunited with his love Annie Cresta, the insane girl from District 4, after she was being held hostage in The Capitol. Everything seems to be pure happiness and love for the two, bu Mockingjay - Part 2 may shake that up.

(Now, if you haven't read the books, I must warn you there are some serious spoilers ahead, so stop reading now, cover your eyes, or read at your own discretion.)

Hopefully in this second part, we will be getting more of Finnick than we did in the first film. (Seriously, why were his scenes cut again?) But as far as the book goes, here's what we have to work with:

One of the first big moments for Finnick and Annie (also known as their couple name Odesta) is their wedding! That's right, these two love birds finally tie the knot. While it is a very happy time for everyone involved, Plutarch Heavensbee also uses this event as another propo, to show The Capitol that despite recent events (Peeta's new personality for instance), the people of District 13 are safe and happy. Annie wears a green dress borrowed from Katniss and Finnick wears one of Peeta's altered suits. The event is topped off with a wedding cake, which Katniss recognizes is Peeta's work.

During their time in District 13, Katniss says Finnick never let go of Annie's hand. The two were lost in a daze of happiness with each other, like no one else in the world existed.

Eventually though, the real action begins (brace yourselves people). Katniss and the rest of the soldiers (including Gale and Finnick) head out on an assignment to The Capitol. They are faced with many obstacles some of which are fatal. To avoid being recognized on the streets, the team heads to the sewers, where they meet a pack of lizard mutts. During the attack, everyone runs for cover, but one person doesn't make it. Katniss goes to help, but it's too late, Finnick can't be saved. As he dies Katniss relives several moments of his life including Mags' laugh, his life in District 4, and Annie's wedding dress.

When they return to District 13, Annie is distraught over the news especially because she is pregnant with Finnick's son, whom he will never meet.

If the movie stays true to the book (which we hope it does) we're gonna need a lot of tissues for this one. RIP, Finnick.

More like this
Everything To Know About 'The Hunger Games' Prequel Movie
By Grace Wehniainen and Radhika Menon
‘The Simpsons’ Will *Finally* Address How They “Predict The Future”
By Sam Ramsden
The 'PLL: Original Sin' Creators Say A’s Identity Will Be “Very Clear” By The Season Finale
By Alyssa Lapid
'The Sandman’s Ending Is A Departure From Neil Gaiman’s Comic Book Series
By Kadin Burnett
Get Even More From Bustle — Sign Up For The Newsletter