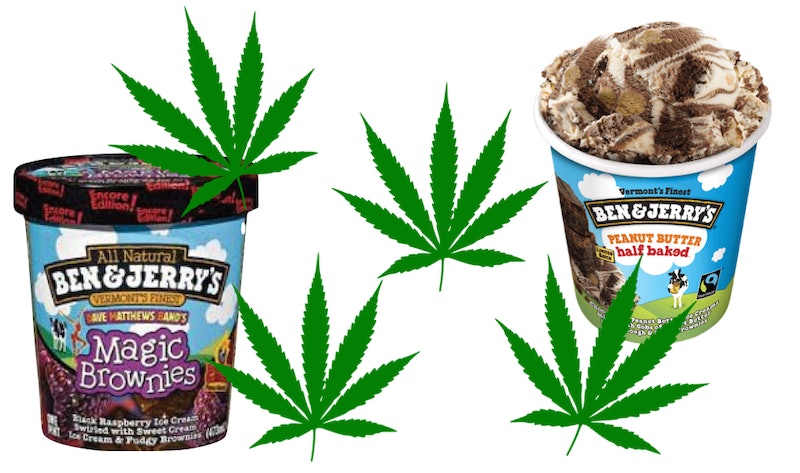 During an interview with HuffPost Live, Ben Cohen and Jerry Greenfield — founders of eponymous ice cream purveyor Ben & Jerry's — indicated that should the opportunity present itself, they would be open to the idea of selling Ben & Jerry's marijuana-infused ice cream. After all, the company once produced a limited edition Dave Matthews Band-inspired flavor, "Magic Brownies," so it's not too much of a stretch. Before we get too excited about the prospect of getting a simultaneous high/brain freeze, it's safe to say that "Pot Ca-rme-lling the Kettlecorn Black" won't be making its way to grocery stores anytime soon.

Cohen and Greenfield might be onto something, though. If people like ice cream, and people like weed, then doesn't it stand to reason that they would love weed ice cream? This could be their shining moment! This could be what gets their names listed among history's greatest innovators: Newton, Edison, Ben, Jerry!

After all, some entrepreneurs in the post-legalization world in Washington and Colorado (along with states in which it's been approved for medicinal purposes) have found a way to capitalize on this newly-available business resource. Last February, an enterprising Girl Scout set up shop outside a San Francisco marijuana clinic, selling a massive 117 boxes.

As for Ben & Jerry's, it looks like we'll for now have to be satisfied with new offerings "The Tonight Dough" or "Wayne'Swirled."