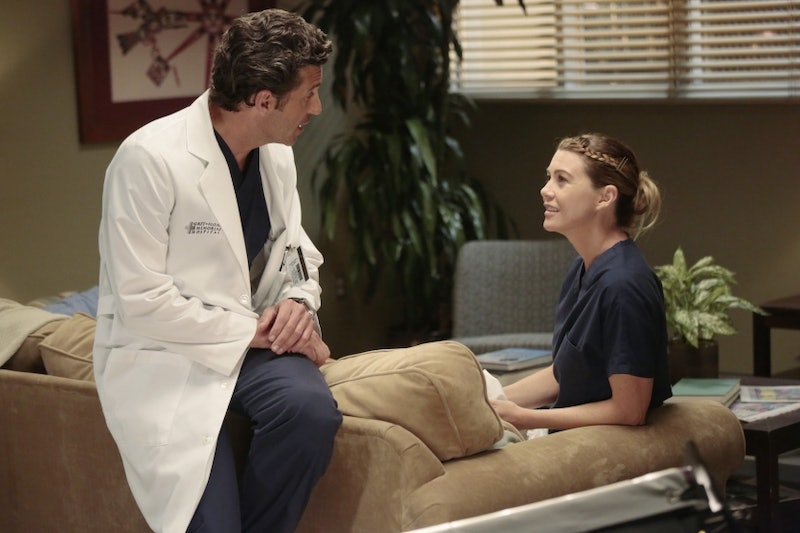 It's understandable if you're concerned about the future of Meredith and Derek on Grey's Anatomy . I am too! Especially since producer Shonda Rhimes reversed her position and told TVLine, "I’m not going to say that [they] are never going to break up." Things haven't been going well at all for the show's central couple in Season 11. They've been spatting and resenting each other ever since Derek chose to turn down the President's job offer so he could stay in Seattle with his family. Things did seem to get better between the spouses when Derek decided to go to Washington, D.C. after all, but now they're attempting a long-distance marriage — and who knows how that will go.

But lest you get too despondent, remember that this is far from the first time MerDer has faced relationship troubles in the decade their show's been on the air. And somehow, they've always managed to pull through. Why should this struggle be any different? In order to calm our fears about an impending fight/break-up/divorce, let's take a look back at all the issues Meredith and Derek have already gone through... and rest easy in the knowledge that, if they could withstand these catastrophes, then they can weather this storm, too.

That Time Meredith Forgot His Name

It's crazy to think back to the first episode, 11 years later. Meredith and Derek didn't meet in the halls of Seattle Grace Hospital — they actually met during a one night stand Meredith had to celebrate the night before she started her first day as an intern. And then she couldn't even remember the name of the cute naked guy sleeping on her living room floor! Ouch.

That Time She Found Out Derek Had A Wife

MerDer had a pretty standard, flirty, will-they-won't-they relationship throughout Season 1. All that was turned on its head with the cliffhanger arrival of none other than Addison Montgomery-Shepherd — Derek's heretofore unheard-of wife. You wouldn't think any relationship would survive the sudden appearance of a secret spouse, would you?

That Time He Picked Addison Over Her

"Pick me. Choose me. Love me." Five episodes into Season 2, Meredith was reduced to begging Derek to choose her over his wife. Fortunately, thanks to Rhimes' stellar writing and Ellen Pompeo's superb delivery, what could have been a pathetic plea became instead a heartbreaking speech — a speech that's become iconic in the years since. Sadly, Derek picked Addison.

That Time She Dumped Him At A Wedding

As we all know, that choice didn't last very long. By the end of Season 2, Meredith was back in Derek's arms and, in Season 3, Addison rebounded with McSteamy himself, Mark Sloan (may he rest in peace). But later in the season, MerDer's relationship started showing signs of strain, and after this locker room argument, she ended up dumping him at Cristina's wedding — right after Cristina got dumped by Burke. "It's over," Meredith announced to the assembled guests, referring to the wedding. "It's so over," she repeated... clearly referring to herself and Derek.

That Time He Started Dating A Nurse

In Season 4, Derek tried to move on by dating scrub nurse Rose. She was pretty and perky and not at all right for Derek. It turned out he craved Meredith's particular brand of "dark and twisty" after all.

Where's an invisibility cloak when you need one?

That Time Derek Got Shot & Meredith Had A Miscarriage

After Meredith built Derek his dream house out of candles in the Season 4 finale (you kinda had to be there), things were relatively stable for the couple through most of Seasons 5 and 6. In Season 5, they planned a wedding but then ended up giving it to Alex and Izzie since Izzie was dying of cancer. MerDer got married on a Post-It note instead. (Again — kinda had to be there.) But then, in the infamous Season 6 finale, the husband of a woman who had died on Derek's table came and started shooting up the hospital. Derek took a bullet and Cristina barely managed to save his life; due to the extreme stress, Meredith had a miscarriage.

That Time She Ruined His Clinical Trial

After her miscarriage, Meredith had trouble conceiving again, so instead they adopted Zola. Things went swimmingly for a while... until Richard's wife Adele was accepted into Derek's Alzheimer's trial. When Meredith found out the ailing woman was being given a placebo, she switched her pills with active medication. Meredith's tampering was eventually found out, Derek's trial was shut down, and he was blacklisted by the FDA. Sooooo not the best moment in the MerDer relationship, to say the least.

That Time They Both Almost Died In A Plane Crash

Season 8 ended with another traumatic mass-casualty disaster: this time a plane crash. Meredith and Derek were both on the plane full of doctors that went down; Meredith lost her sister, Lexie, and Derek lost his best friend, Mark. Derek's hand was also mangled, threatening his career as a surgeon. Fortunately, MerDer both lived, Derek healed, and everything turned out alright — after copious mourning, of course.

Obviously, Meredith and Derek have also been through plenty of tragedies that didn't involve their relationship: near-drownings for Meredith, bouts of self-doubt for Derek, delivering their child in a power outage during a superstorm... But through it all, MerDer has survived, and they've stayed true to their Post-It note vows: to love each other even when they hate each other, and to never run. Oh, and to take care of each other when they're old, senile, and smelly — but we haven't gotten to that point yet. (Maybe in another 11 seasons.)

More like this
You’ll Most Definitely Recognise Kyle Pryor’s Soap Star Girlfriend
By Sophie McEvoy
The 'Kenan & Kel' Reunion On 'SNL' Took A Dramatic Turn, Thanks To Keke Palmer
By Brad Witter
Theo James Revealed The Truth About His 'White Lotus' Nude Scene & Fans Can't Cope
By Stephanie Topacio Long
Keke Palmer Just Announced She's "Going To Be A Mom" On 'SNL'
By Brad Witter
Get Even More From Bustle — Sign Up For The Newsletter