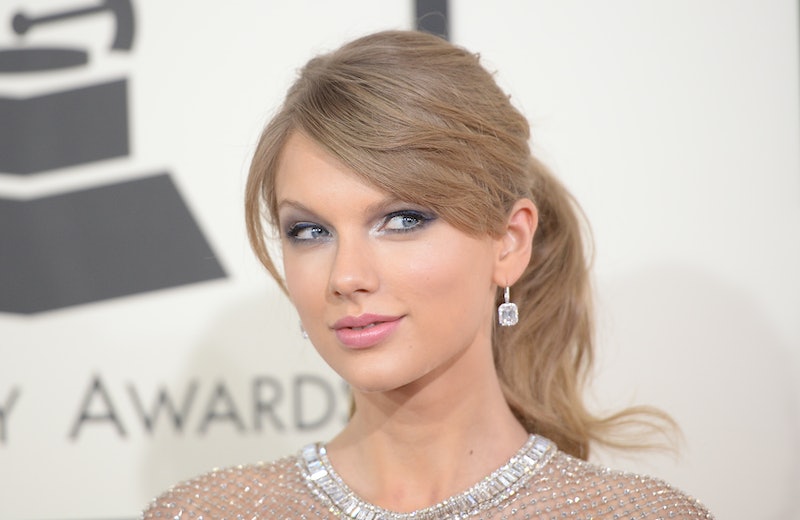 As any of my friends can attest to, I've been listening to Taylor Swift's latest album 1989 pretty much nonstop since its release in October of 2014. But even avid Swift listeners like myself may have had a hard time deciphering some of Taylor Swift's lyrics — especially when it came to hit single "Blank Space." Nope, you're not really hearing "all the Starbucks lovers" in the chorus — even though Swift really does love all you coffee fans out there. The proof actually comes from Swift herself: In a new post on her Twitter, Swift expressed her love for all of the world's "Starbucks lovers," but also informed the world that it's definitely not the correct lyric in "Blank Space." (Didn't know? Don't worry — Starbucks didn't either!)

(For the record, the real lyric is "got a long list of ex-lovers," but if you'd rather make it about coffee, well, no one will blame you.)

However, Swift's "Blank Space" lyric is far from the only grossly misheard song lyric of 2014. In fact, lots of lady pop stars released songs this year that made even their biggest fans sing the wrong words. It happens to the best of us, and even though there's plenty of ways to fact-check your song lyrics before you start belting out your favorite new song, well, what fun is that?

Here are the song lyrics from your favorite female pop stars that everyone royally messed up in 2014.

MISHEARD LYRIC: "Fart on your body, I came alive."

REAL LYRIC: "Thought on your body, I came alive."

But I think we can all agree that the song as a whole makes no sense.

And you thought that scones were just really fancy pastries.

Not really a big deal, but it does change the entire context of the song.

"The Heart Wants What It Wants," Selena Gomez

REAL LYRIC: "What the heart wants."

Considering that the song is about Justin Bieber, the former lyric does make sense...

"I Luh Ya Papi," Jennifer Lopez

Yes, it absolutely does sound like "I love you puppy." But come on, people — it's in the title!