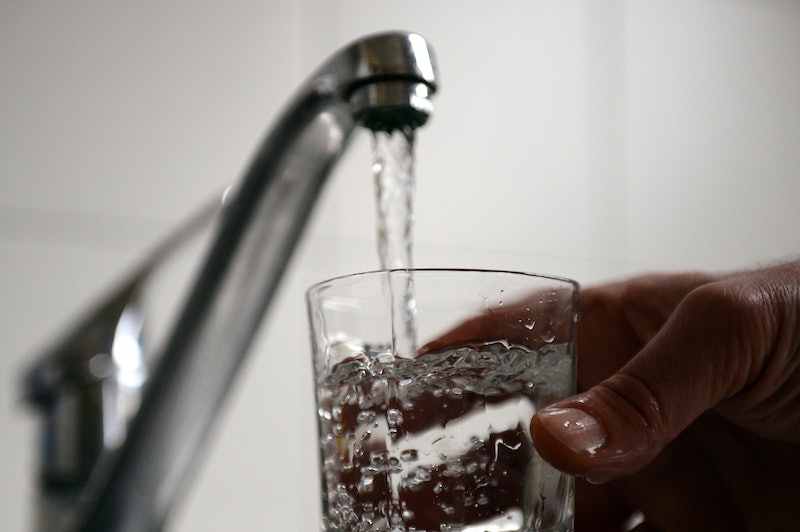 Picture this scenario: You're in the zombie apocalypse (a la The Walking Dead), and you're out of water. It's been days, and you're in your final days if you don't get anything to drink. What would you do for water? Now picture a real-life scenario: At least 2 billion people can't access proper sanitation that provides them with potable water. Hundreds of thousands of millions of people literally cannot find safe water to keep them alive. What do you think they would do for water? A recent study found that Americans will not drink recycled water, even though it's completely safe for consumption — possibly even safer than unfiltered tap water.

It's the "gross factor," The New Yorker reports. Recycled water doesn't mean drinking water from rain or a mineral spring; it means wastewater that was processed to make clean, totally safe-to-drink water. Although people might not be able to tell the difference upon consuming the liquid, once they hear that it was previously human waste, there's a huge "yuck" aspect to the idea of drinking recycled water. Those in the study held an opinion many of us probably would: once contaminated, always contaminated. But what if it could save lives? Paul Rozin, one of the authors of the study, told Maria Konnikova of The New Yorker:

The problem isn't making the recycled water but getting people to drink it. And it's a problem that isn't going to be solved by engineers. It will be solved by psychologists.

According to UN Water, 783 million people do not have access to clean water, and 6 million to 8 million people die each year because of it. Bill Gates, an activist and advocate who often uses his billions of dollars for good, helped fund an innovative product called "The Omniprocessor," which can clean water well enough to make drinking water from water that previously had fecal matter in it. It sounds disgusting, I know, but that's exactly what Rozin's study aimed to understand.

According to The New Yorker, disgust is actually a life-saving instinct. Sometimes we are turned off by certain things because they might actually harm us in some way, and we unconsciously realize that. But as Rozin points out, all water is recycled in some way. In fact, rain is water that used to be in someone's toilet, he says. Some study participants agreed that they would drink the recycled water if it was in an aquifer for 10 years (because that makes so much difference), but the Omniprocessor can make water potable in about five minutes.

In California, which is currently suffering from a severe drought, several areas are turning to recycled water in an attempt to combat the dryness. The city of Fresno is using its recycled wastewater for non-drinking usage, such as irrigating green spaces. The water will be disinfected using ultraviolet light, according to The Fresno Bee. The California Water Service Company has partnered with the city of Sunnyvale, the Santa Clara Valley Water District (SCVWD), and Apple Inc., to bring recycled water to the Apple campus in Cupertino, California. Valley Water says the treated wastewater will be used for non-potable uses, including landscaping, toilets, and cooling.

For his part, Gates said he would "happily" drink the water that was cleaned by the Omniprocessor every day, and he proved that by taking a sip in front of a crowd. But if we're to fully utilize this live-saving invention, we might need to get over our disgust that water might have once been touched by human waste. If a baby vomits on a shirt, we wash it and wear it the next day. We follow the five-second rule for food dropped on the ground. If science (and Bill Gates) tells us that this cleaned water is perfectly safe for us to drink — whether it's the zombie apocalypse, a drought, or an arid country where people struggle every day to live — it might be time to get over our disgust at the idea.