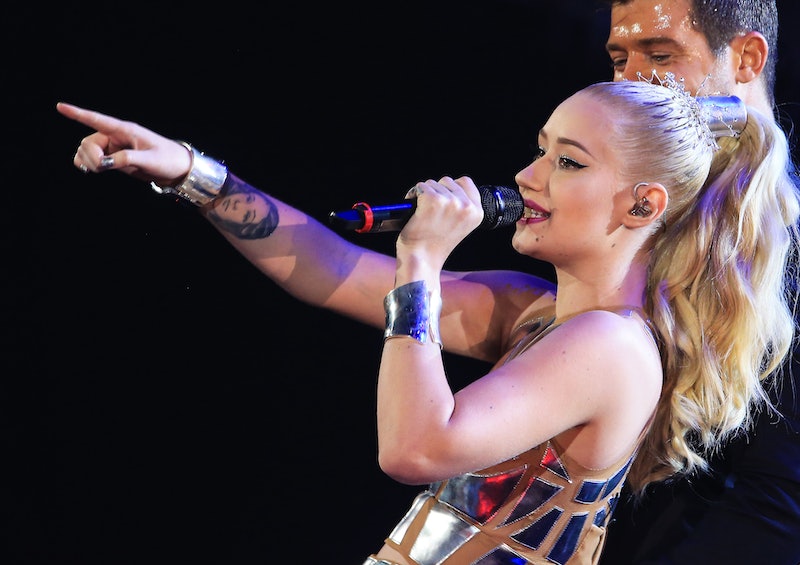 Will there ever be a time in the world when there isn't a mighty need for defensive essays calling for the world to stop criticizing a woman for her appearance? Somehow, I don't think so. Only one day after the controversy surrounding Beyoncé's untouched photoshoot pictures hit the Internet, rapper Iggy Azalea has quit social media due to a similar controversy. However, instead of suffering negative backlash based on pictures of her face revealing that she has acne like a normal person, the rapper was the victim of intense body shaming after being seen in a bikini in while on holiday with her boyfriend. As a result of the negative comments, Azalea has decided to quit social media for the foreseeable future, and that's really upsetting.

Of course, Azalea did not go quietly. Instead, she bravely called the Internet out on this ugly behavior in a relatable Twitter rant perfectly explaining why she felt pushed to the point of needing to take a step back for a while. As loving and supportive a place as the Internet can be, it also has a truly ugly dark side that everyone from Uma Thurman to Renee Zellwegger to even a scant few males like Rob Kardashian have suffered from. The anonymity of the Internet breeds the kind of judgmental, awful behavior that many people wouldn't dare display in real life where they could be held accountable.

As you can tell from the names I threw out just off the top of my head, Azalea's story is not unique. If you are famous, and especially if you are a woman, then it seems to be an accepted fact of life that you are going to have to deal with people making disparaging, offensive, and even borderline cruel remarks about your appearance as if that is the only thing that gives you any kind of social value in this world. Of course, this is not exclusive to celebrities. Judging women on their appearance happens everywhere, whether to celebrities or to people who are looking for jobs or even people who are still in school. There have been countless think pieces dedicated to the insidious association between women and the need to be pretty in order to get anywhere in the world.

But how many women have to be harassed to the point of needing to say goodbye to the positive people in their lives — in Azalea's case, her fans — in order to remove themselves from a neutral ground (such as social media) for their own personal health and happiness before society truly comes to realize that this is unacceptable? How many women have to be made to feel like they have to be ashamed or embarrassed about the way that they look, no matter what their personality traits or accomplishments may be, based on negative backlash given to their faces or over the Internet? Why isn't the same level of outrage being drummed up about this as there is about so many other seemingly innocuous human rights issues?

Whether you are fat shaming or body shaming or slut shaming — whether you are making disparaging remarks about the way a celebrity looks, from their acne to their hair — the fact of the matter is that you are reducing that person down to something less than human. You are reducing them to a mask of everything that you can see with your eyes and deem fit to judge, frequently in the most offensive commentary possible. And that's not only wrong, but an incredibly disappointing trend that needs to come to an end.