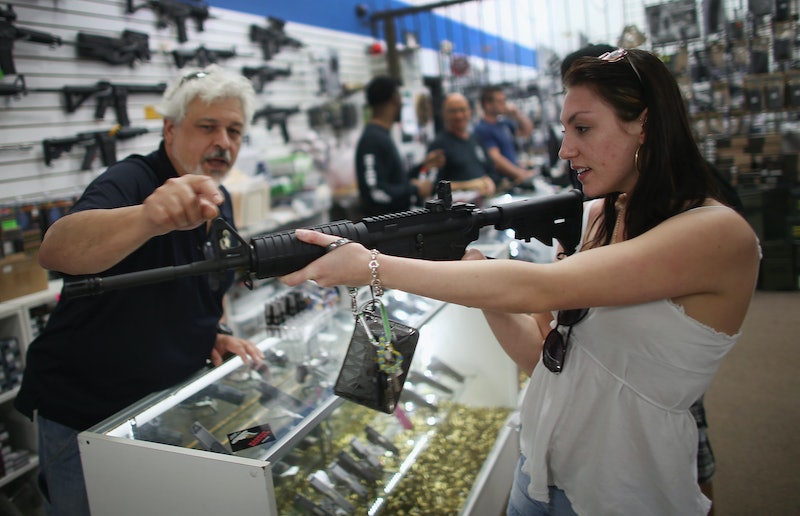 Conservative lawmakers from Florida to Nevada have found the solution to ending sexual assault on college campuses: guns. The New York Times reports that legislators in 10 states are currently pushing for college students to carry firearms on campuses, in a move to purportedly protect female students from sexual violence. At odds with this new gun-toting movement, however, is the long-held theory that guns may make young women more susceptible to sexual and physical violence.

Concealed carry of firearms is currently banned on college grounds in 20 states, while another 23 states have laws leaving the decision to ban concealed firearms up to each college and university. The likelihood of these policies changing anytime soon is slight, yet the convergence of on-campus sexual assault with gun rights is certainly getting more attention than ever. Do politicians truly care about curtailing sexual assault, or are they piggy-backing gun rights onto an entirely different national issue?

Allowing the legal carry of firearms on college and university grounds is hardly a new idea. The national student-run organization, Students for Concealed Carry, began not long after the deadly 2007 Virginia Tech shooting as a way to lobby for not only Second Amendment rights, but also self-defense. The group advocates for legal concealed carry on all college campuses for students who are 21 years of age or older.

Pro-gun politicians have been framing the issue of arming female college students with a similar "good guy stopping a bad guy" philosophy: The only way to stop assailants is with a gun, so wouldn't it make sense to arm young women on college campuses? As Nevada state Rep. Michele Fiore, a pro-gun Republican, put it to The Times:

If these young, hot little girls on campus have a firearm, I wonder how many men will want to assault them. The sexual assaults that are occurring would go down once these sexual predators get a bullet in their head.

To recap: A rapist, a woman with a gun, and a bullet to the head. What could possibly go wrong?

Self-defense measures have long been debated in feminist circles. While no one would say that it's wrong for a woman to defend herself against her rapist, some anti-sexual assault activists believe that placing so much attention on self-defense, whether its gun rights or women-centric martial arts classes, detracts from other forms of sexual assault prevention. Is the obvious answer here arming young women, or teaching people how to respect boundaries and the rights of others?

What gun rights activists are leaving out of the conversation is the alarming link between intimate partner violence and gun deaths, indicating that some gun rights supporters might be looking at this issue with an outdated idea of when and how rape and sexual assault occur. According to statistics from the Department of Justice, approximately two-thirds of all rapes are committed by someone known to the victim, which is typically called "acquaintance rape," while four in 10 rapes occur in the victim's home. A large number of women, then, would be granting their rapist access to a gun, which in turn could be used against them.

It's not a stretch or hyperbole: Federal data has shown over the years that women have an increased risk of being the victim of intimate partner violence when a gun is in the home, or the perpetrator has access to a gun. In fact, women are seven times more likely to be killed by an intimate partner when there is a gun in the home, according to research compiled by Johns Hopkins University.

A recent report from the Violence Policy Center, which tracks homicide and domestic violence, found that 93 percent of female homicide victims in 2012 were killed by an intimate partner; 52 percent of the female victims were killed with a gun, with the handgun being the most prevalent weapon involved.

"For individual women, we hope our study is a reminder to think very carefully about the facts before considering purchasing a gun for the purpose of self-protection," Violence Policy Center executive director Josh Sugarman wrote in an article for The Huffington Post when the report was released. "The evidence shows that for women in America, just like men, guns are most often used not to save lives, but to take them."

While intimate partner violence is not always directly related to rape and sexual assault, data has shown that there's a clear overlap of physical and sexual violence. The most recent report on intimate partner violence from the Centers for Disease Control and Prevention shows that more than 14 percent of female victims have experienced rape, physical violence, and stalking.

And according to the Harvard Injury Control Research Center, women who reside in states with loose gun laws have elevated rates of unintentional gun deaths, firearm suicides, and firearm homicides than women who live in states with less guns.

So, will arming young women actually prevent sexual violence and overall violence against women? Unfortunately, the success rates seem pitifully low. In one study published in the American Journal of Public Health, the researchers found after interviewing women at 67 domestic violence shelters in the United States that just 3 percent of women successfully used a handgun to defend themselves, while only 1 percent were able to injure their partners with a handgun. The women were much more likely to have the gun pointed in their direction.

Sexual assault and rape are violent crimes that might only turn more violent in the long run when guns are involved. Putting a "bullet in their [rapist's] head," as Fiore put it, is as much as a fantasy, it seems, as rape being committed by an anonymous assailant on an unlit campus path.