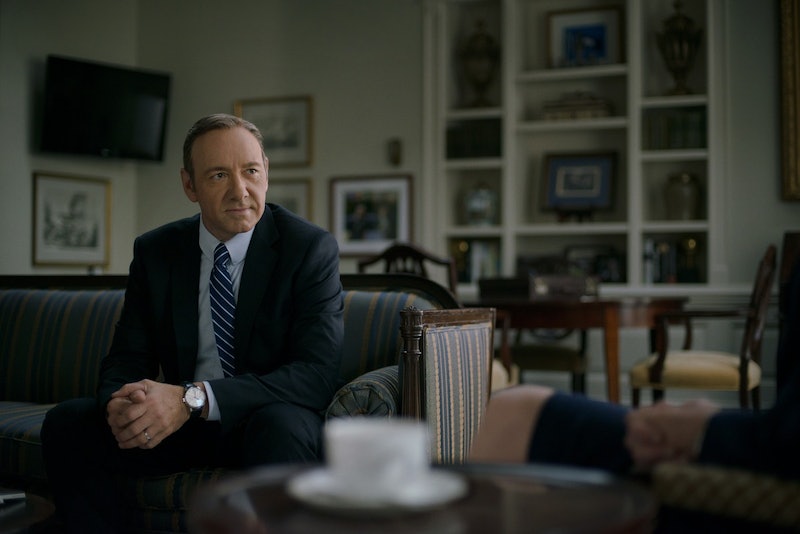 Now that the countdown to the House of Cards Season 3 debut is officially underway, fans are only left with one remaining week of torture before diving back into Frank Underwood's morally corrupted world of politics and greed. But before that glorious day of binge-watching is once again upon us, there is one other way you can get your HoC fill right now — and no, I'm not referring to another accidental release on Netflix. Whether you're aware of it or not, this isn't the first time this series has made its way to the small screen. A U.K. version of the same name existed back in the '90s, detailing the main character Francis Urquhart's (pretty obvious how they got to Frank Underwood, eh?) journey as he made his manipulative climb up the political ladder. But don't let the title and similar plot description fool you — Netflix's House of Cards deviates from the original U.K. version in a variety of ways.

Naturally, there are the more obvious differentiations that kinda go without saying. Like the fact that the title character is played by two different (but highly-talented actors): Kevin Spacey (US) and Ian Richardson (UK). Then there's the location to consider. In the U.S. version, Frank's ultimate goal was to become the President of the United States, while the U.K. installment saw him set his sights on becoming Prime Minster. But these are the easy ones. Both series take their own paths, which is a big part of what makes both interpretations equally thrilling to watch.

So, if you haven't done so already, I seriously suggest you take this extra free time to emerge yourself in the equally gripping British alternative. Though if you do, be prepared for these very distinct differences:

There Are Fewer Episodes

While Netflix provides viewers with 13 action-packed episodes of political mayhem, the U.K. series is comprised of only four episode per season. So given that the show ran for a total of three seasons, that means the entire series takes place over the course of 12 episodes. Sure, that may not seem like enough on the outside, but let's not forget that sometimes less is more. This also means that the pace of everything speeds way, way up. So instead of it taking two seasons for Underwood to become the leader of his country, Urquhart manages to pull it off in one. So if you decide to go further than the first four episodes, be prepared to encounter a few spoilers along the way that have yet to happen in Netflix universe.

There Are Fewer Characters

Though the lack of episodes may help to drive the plot forward at a brisk pace, it also prevents the audience from getting to know each of the characters as well as we may want to. Take Urquhart's wife, Elizabeth (the equivalent to Claire Underwood) for example. Unlike Claire, Elizabeth gets very little screen time and we learn practically nothing about her background. She's simply the whisper in her husband's ear, planting devious notions in his mind like a formidable Lady Macbeth.

It's also worth mentioning that there are far less supporting characters in general. A Rachel Posner equivalent doesn't even exist, which pretty much changes Tim Stamper's (Doug in the US version) role entirely. It's an understandable alteration that happens when you have limited time at your disposal, but it definitely makes you feel less invested in the characters aside from Francis himself.

I think it's safe to say we all have Zoe Barnes' shocking death seared permanently into our memories. But in the U.K. version, Zoe's counterpart Mattie meets her demise in a very different, but equally shocking way. Instead of being shoved in front of a subway car, Francis throws Mattie off the roof of a building when he fears that she knows too much for her own good. Either way, though, it just goes to show that being any version of Frank's mistress does not turn out well.

Sorry, folks, but if you were hoping to see a British version to Frank and Claire's spontaneous three-way with Meechum, you will find yourself severely disappointed. And to make matters worse, there's not even a Meechum in this series. CAN YOU IMAGINE?

What is Frank without his ribs? British, apparently. Sadly, this Chief Whip has no special rib joint to go to as a way to unwind. I mean, I know he's a murderer and everything, but a rib-less world just seems downright cruel.

We're all familiar with Frank Underwod's iconic ring tap by now, which is meant to both harden his knuckles while also knocking on wood at the same time. But evidently this is not a trait that Urquhart shares. Instead, he continuously uses the saying, especially to Mattie: "You might very well think that; I could not possibly comment."

There's No Cashew. At All.

The U.K. series has no idea what it missed out on. #TeamCashew4Eves