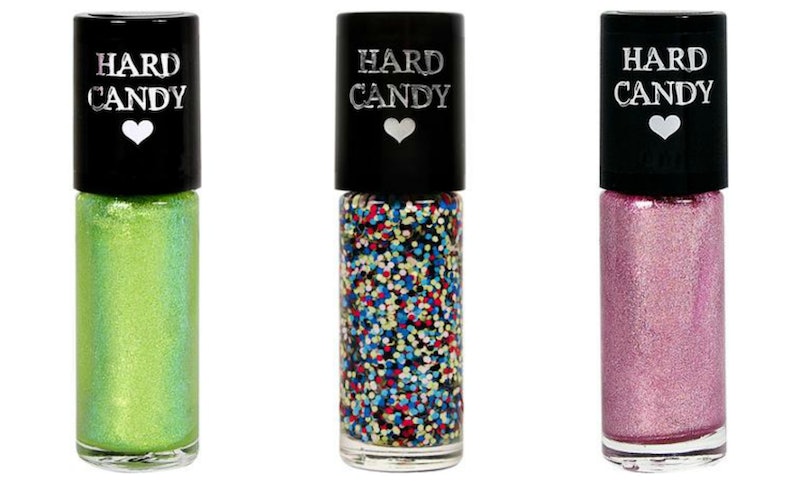 Essie, OPI, Deborah Lippmann? Ugh, as if! Today, it's all about jelly shoes, plastic chokers, and the candy-colored nail polish shades of yesteryear. Yes, the '90s are officially riding back into style in the backseat of Cher Horowitz's jeep wrangler (blasting the Spice Girls on the radio, of course). We were fangirling back in August over the return of the Hard Candy nail polish that '90s girls rocked back in the day while trading Bonne Bell Lip Smackers and telling secrets to our Talkback Dear Diaries, and now an official date has been announced! Hard Candy's 20th Anniversary Collection, featuring reissues of the most popular nail polish shades from the '90s, will be available in April. Talk about the best #TBT gift ever!

For the retro makeup company's 20th anniversary, Walmart is reviving the cult brand by bringing back those old school cotton candy colors that made it famous. According to InStyle, classics such as Alicia Silverstone's light blue fave, Sky, as well as "Claws Up, Mint, Scam, and Coconut — will be available in a set plus three new hues."

More like this
I Tried Marilyn Monroe's Makeup Tricks, & They're Pretty Genius
By Olivia Rose Ferreiro
10 Nail Trends That Perfectly Capture The Early 2000s
By Paris Giles
The Most Extra Party Girl Beauty Looks From The Early 2000s
By Paris Giles
5 Easy (& Wearable) Red Eyeliner Looks To Try
By Olivia Rose Ferreiro
Get Even More From Bustle — Sign Up For The Newsletter