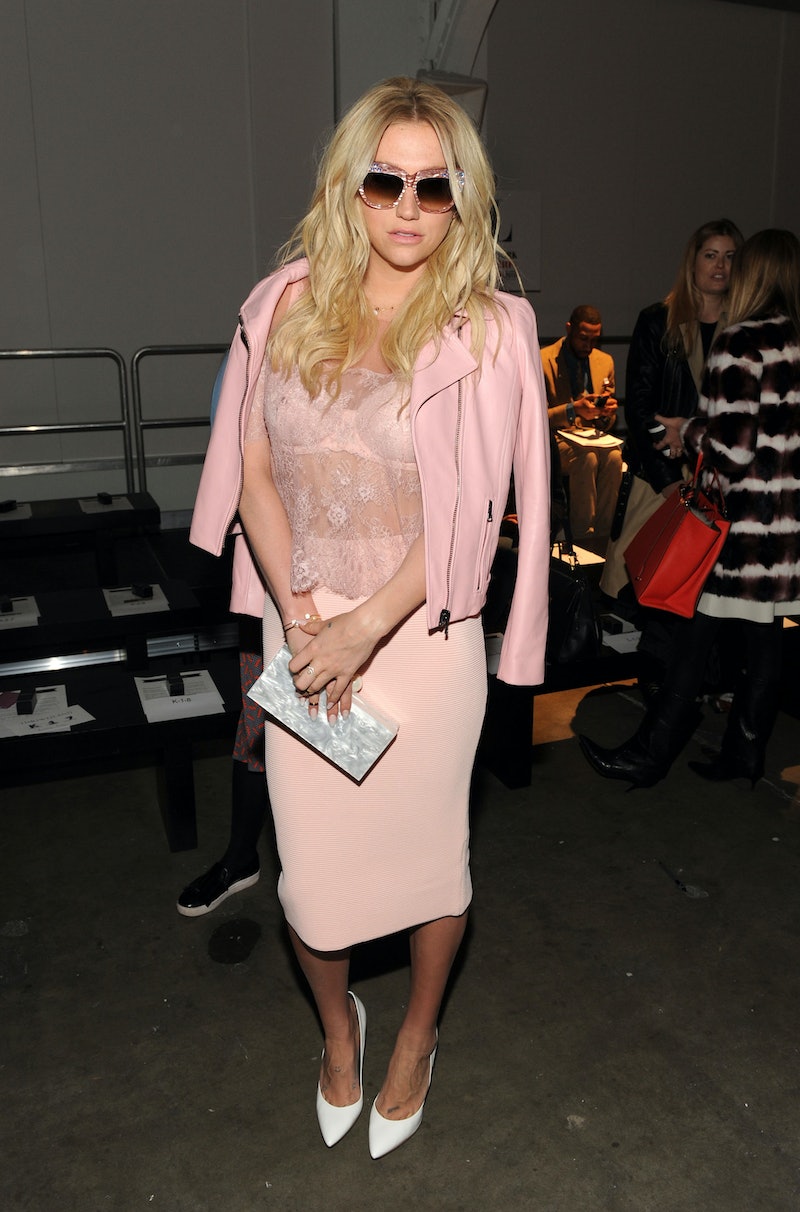 The good news: In a new interview, Kesha said she's been obsessively working on new music and it's "coming." Score! The bad news: Depending on what happens with the singer's lawsuit against Dr. Luke, we might not get to hear it for a while. How frustrating. But let's start with the good news, shall we? Discussing her new music with Yahoo! Style on Wednesday, Kesha said:

Well, I've been working on music for months now, obsessing in the studio all night. So, I have a lot of new music, but it's been so all over the place. Some of it's weird country, talking about... can I curse?

No, unfortunately, she wasn't allowed to curse. She continued:

OK, well, it's about "stuff." And then I have love songs, so it's all over the place. I'm still kind of compiling my record.

I wonder what kind of "stuff" Kesha is singing about in her "weird country" songs? I mean, this is Kesha we're talking about here — the woman who brought us "Dinosaur" and "Supernatural" — so the bizarre possibilities are truly endless! When asked if we could expect to hear "a new sound" on her upcoming album, the 27-year-old "TiK ToK" hit-maker enthusiastically responded, "Totally." Well, that's definitely an exciting development. Check out the full interview below.

Now, it's time for the bad news (womp, womp): Kesha wrote on Instagram in January that she would "release new music as soon as" she "possibly can," and while I believe her, I think there could still be a significant wait ahead of us.

As you probably already know, Kesha is currently embroiled in a complicated legal battle with her former producer, Dr. Luke. As Billboard explains, in October 2014, Kesha filed a lawsuit against Luke that alleges he sexually, physically, and verbally abused her for years. Shortly after, Billboard reports Luke filed a countersuit that denies Kesha's claims and says she's trying to "extort him" to get out of her recording contract — which requires her to release four more albums under his Kemosabe Records label.

If Kesha's contract is still in place (and as far as I can tell, it is), I can't imagine she'll be able to release any of her aforementioned new material — not until some important rulings have been made, anyway (and those don't always happen quickly). However, looking on the bright side, Kesha certainly seemed to be doing well during her recent Yahoo! Style interview. For what it's worth, she looked wonderful, too.

My hope is that Kesha will be able to move forward with her career in a safe and supportive environment soon — like, really soon. But regardless of how long it takes, her fans, of course, will wait.