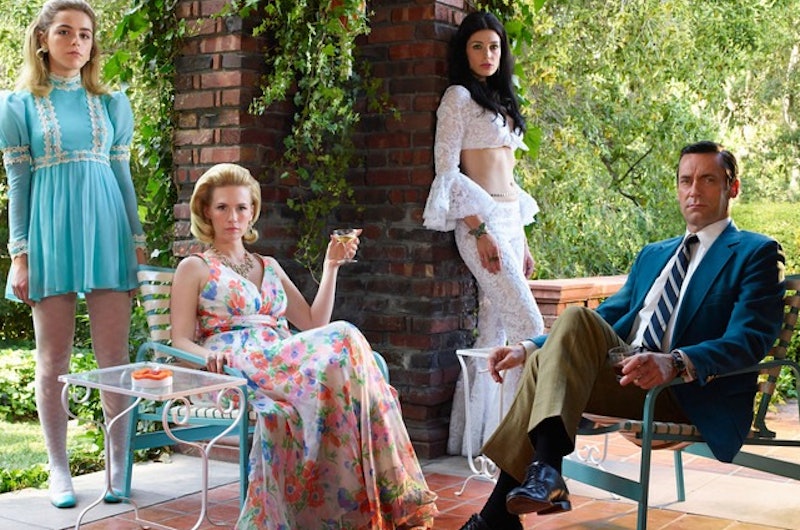 Ah, the sweet world of Mad Men. Being a fan of AMC's flagship critical darling can be its own brand of torture — namely because no show in the modern age has ever been more effective at hiding spoilers than Matthew Weiner's TV baby. That's as evident as ever in the first teaser for season 7 part 2 of Mad Men . It's a reminder: You can't even expect basic plot details from these people until the episode itself is airing right there in front of you. J.J. Abrams could learn a lesson or two from Weiner's ability to keep all actual information from the public until exactly the moment he wants us to know it.

The final season of Mad Men premieres on April 5, 2015, and pretty much all we know at this juncture is what happened during the first half of last year's season 7 and that everyone is looking super fly in their late-'60s possibly early-'70s duds. Everyone always tries to discern deep hidden messages from these images, but if the whole Megan-and-the-Manson-family debacle is any indication, it's often just a whole lot of projection and forgetting that Mad Men is not like most modern television. As Mad Men experts Tom and Lorenzo noted, "you can’t ever really divine meaning from the costumes worn in these shots." And, well, all we've really got so far is the costumes — the teaser's pretty much just a live-action video of the promo shots. Though if you want to divine that Don standing next to that pool after all his suicide fantasies means something, I will not protest.

The teaser's set to Diana Ross' "Love Hangover" (recorded in 1975 if you wanna theorize around that) and is called, rather sadly for fans, "The Party's Over." You can watch it below.