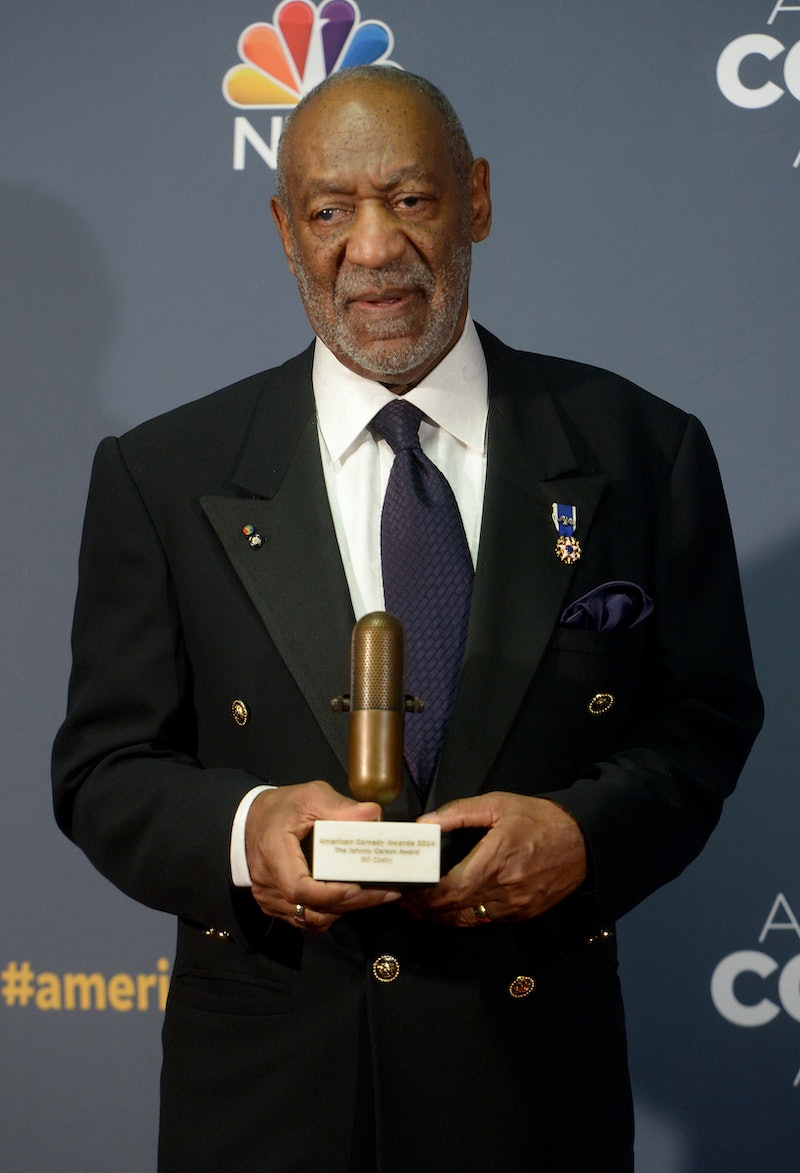 Well, that didn't take long. If you've been wanting to hear even more news revolving around the former Cosby Show actor, here you go. Bill Cosby is responding to Eddie Murphy not playing him on Saturday Night Live's 40th anniversary special, and, yes, his statement is pretty much what we all expected. Not only is it short and to the point, but Cosby is thrilled with Murphy's actions. The statement is as follows:

I am very appreciative of Eddie and I applaud his actions.

For those unfamiliar with the situation, apparently, Norm Macdonald asked Murphy to once again portray Cosby as part of SNL's celebration, but the comedian reportedly turned it down. Macdonald revealed the news via Twitter by tweeting, "Eddie decides the laughs are not worth it. He will not kick a man when he is down."

It's really no surprise that Cosby is overjoyed with Murphy "defending" him, but did the Dr. Dolittle actor really stand up for him? Why did he really turn down the part? First of all, Murphy did not release his own statement, and we're all just taking Macdonald's word for it. I'm not calling Macdonald a liar, because, obviously, Murphy did not portray Cosby, and Kenan Thompson did instead. However, I'd like to hear from Murphy himself about his reasons for why he didn't want to portray Cosby. Was he defending Cosby? Did he not want to do it because he didn't feel like it? Whatever the case, it'd be nice to hear Murphy's side of the story.

Furthermore, it seems like Cosby is just assuming Murphy has his back. Either Cosby is desperate for support, or he is getting cocky and reading way too much into Macdonald's tweet. Just because Macdonald says Murphy turned down the sketch doesn't mean Murphy is sticking up for the comedian who has been accused of sexually assaulting many women over the years.

Lastly, does anyone else find it odd that Cosby responded to Macdonald's tweet, but he never commented on Phylicia Rashad, Keshia Knight Pulliam, or Malcolm Jamal Warner's statements defending and speaking highly of their former Cosby Show co-star? I'm surprised Cosby wouldn't be thanking them individually, similar to how he is thanking Murphy.

Maybe I'm jumping to conclusions with Cosby's response, but I also feel like others, including Cosby, are reading way too much into Macdonald's tweet. Overall, it's time we hear from Murphy himself. As for the allegations themselves, Cosby's statement via his lawyer remains the same: “Over the last several weeks, decade-old, discredited allegations against Mr. Cosby have resurfaced. The fact that they are being repeated does not make them true. Mr. Cosby does not intend to dignify these allegations with any comment. He would like to thank all his fans for the outpouring of support and assure them that, at age 77, he is doing his best work. There will be no further statement from Mr. Cosby or any of his representatives.”