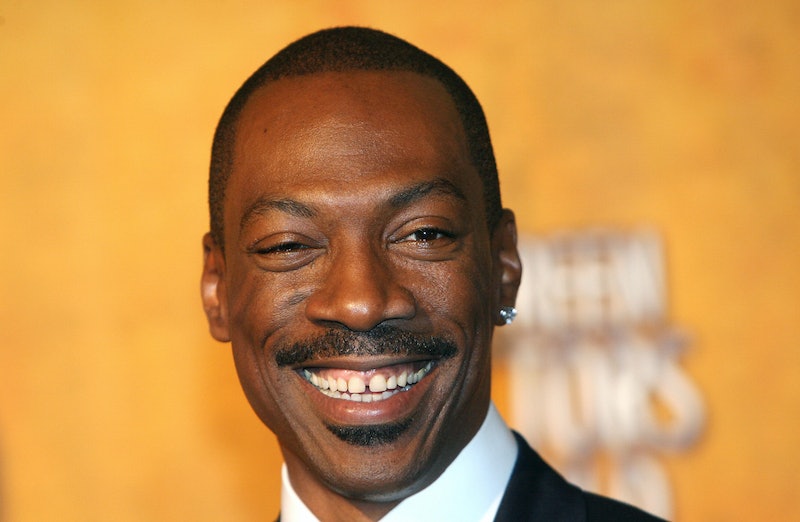 There were a lot of things about SNL 40 , the Saturday Night Live anniversary special that aired last Sunday, that surprised most viewers: Betty White making out with Bradley Cooper. The absence of Cecily Strong from the Weekend Update montage. And, perhaps most shockingly, the fact that SNL legend Eddie Murphy returned to the stage for the first time in over 30 years — and didn't do much but bask in applause and thank the show for having him back. Yet apparently, that wasn't all the comedian was supposed to do that night; according to former SNL star and writer Norm Macdonald, the plan was for Murphy to impersonate Bill Cosby during the "Celebrity Jeopardy!" sketch earlier in the show.

(Update: In a statement to NBC News released through a spokesperson, Cosby said he was grateful for Murphy's decision, saying, "I am very appreciate of Eddie and I applaud his actions.")

According to a series of tweets sent out by Macdonald Wednesday night, the writers had hoped to get Murphy to play Bill Cosby during a portion of the "Jeopardy!" sketch in which the troubled comedian would compete in the category of "Potent Potables." Murphy would do an impression of Cosby mixing a drink, get plenty of laughs, and end the sketch on a high note. Yet when it came time for the show, he backed out — and his reason, according to Macdonald, was that he didn't want to "kick a man when he is down."

So, in other words, Murphy didn't want to hurt Cosby by tarnishing his reputation even further than it already is. There are so many things wrong with this argument, firstly that a joke — on SNL, no less, where every famous person there is has been the target of a one-liner at one point or another — would be hurtful to Cosby, especially considering everything else he's withstood this past year. Secondly, and most importantly, Murphy seems to be implying that it's wrong to make fun of Cosby at this time. He's already gone through so much, the comedian seems to be saying; why make things even worse?

Because, if the allegations are true — and at this point, with over 30 women having accused him of assault, it's hard to believe that they're not — Cosby's "hurt feelings" should be the least of anyone's concerns. The man deserves all the ridicule, criticism and outrage SNL can muster, and the fact that he hasn't been convicted (yet) of his crimes doesn't mean that he's not still fodder for jokes.

There's no reason SNL, or any other show, for that matter, should be hesitant to laugh about Bill Cosby. If anything, a joke-filled sketch on a late-night variety show is the bare minimum of what the disgraced star's fellow comedians should be doing in response to the allegations. With few exceptions (thank you, Judd Apatow), most comedians have either stayed mum or outright defended Cosby these past few months. It's unfortunate, if not surprising considering how his peers have reacted, that Eddie Murphy is apparently just as unwilling to take a stand.

At least one SNL star was brave enough to take on the "controversial" material; during "Celebrity Jeopardy!," Kenan Thompson, dressed in a sweater and going on about his favorite alcoholic beverages, took over the role Murphy was set to play. It was a brief joke, but a powerful one; Thompson's impression got some of the biggest laughs of the sketch. Yet as Macdonald tweeted, Murphy felt that "the laughs [were] not worth it" — and apparently, neither was taking a stand against an alleged rapist and abuser on a show seen by millions.