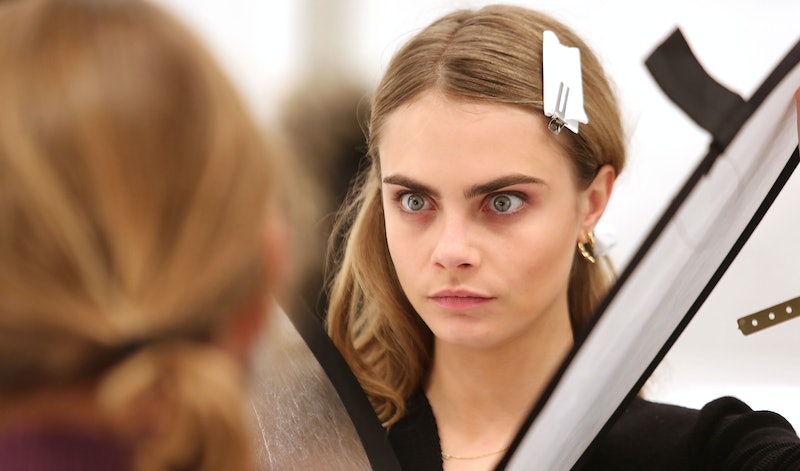 The idea of Cara Delevingne walking in New York Fashion Week was kind of up in the air for a while — as one of the biggest models of the moment it would have made sense for her to make an appearance, but on the other hand, she's quite the busy lady these days, what with the new John Green film Paper Towns and the upcoming Suicide Squad blockbuster she's got coming down the pipes. She ended up not walking any New York shows this year, but I'm still holding out hope for London Fashion Week — it is her home stomping ground after all!

Whether or not she'll make an appearance on the runway remains to be seen — but let's not let that stop us from some wild speculation. Based on her (numerous) endorsements, model friends, and past appearances, let's do a little detective work and try to figure out which shows Ms. Delevingne will be walking at LFW. Heck, even if she's not on the runway, there's a 90% chance of her appearing in the front row (I feel like some kind of supermodel meteorologist) — so let's take a look at all of Cara's potential shows:

She opened the show at September's LFW, plus, she's currently starring in a Topshop ad campaign. Hopefully we'll see her on the runway again this time around.

She may not have walked in the show last September, but she was there promoting My Burberry, along with Kate Moss — while also supporting her besties Suki Waterhouse and Jourdan Dunn.

She made waves when she wore his daring pastie-centric party dress, and she's starred in an ad campaign for his Black Orchid fragrance, so is a trip down the runway imminent? Signs point to yes.

She's appeared in their fashion week presentations before, plus she's collaborated with them on a line of purses. Maybe she'll be back again this year.

Here's hoping for some more Cara at LFW!