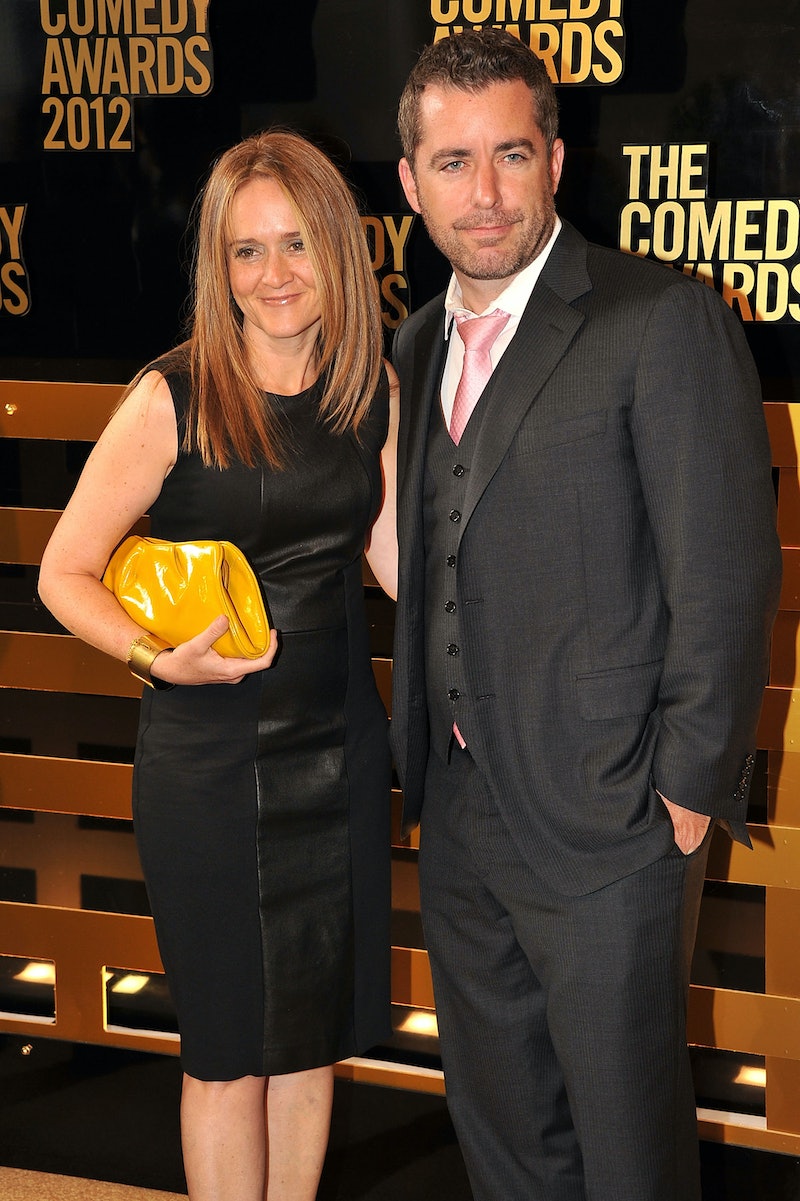 There's been a lot of buzz about who will take over The Daily Show now that Jon Stewart has announced he will abdicate his Comedy Central throne. Two people who have had all eyes on them since Stewart's announcement are Samantha Bee and Jason Jones, The Daily Show 's real life married couple, and longest tenured correspondents at The Daily Show (Bee has been there since 2003, Jones since 2005). The couple, who is spending time in Los Angeles promoting their new Butterfinger Cups "Butt-In" project, spoke with Bustle about the likelihood of taking a seat behind the late-night desk.

To recap: Comedy Central and Stewart announced that he will remain behind The Daily Show desk until the end of 2015, but the name (or names) of who could take over has remained tight-lipped. Even Bee and Jones are in the dark, apparently.

"We're not privy to those kind of [decision]... That is above our pay grade," Bee told Bustle. "I think the Gods of Comedy Central decide... They're playing chess up there, they're making a racket." Jones jumped in at that point: "We hear them upstairs, but it has not trickled down yet."

The truth is, while the two might know more than they're letting on; Stewart's news was only just announced Feb. 10, so surely nothing is set in stone.

But it would be nice to see a change occur behind the desk, whether that means a couple — like Jones and Bee — or a young woman — like Jessica Williams, who has publicly said she won't be taking the host job. When asked about the potential of having a woman behind the late-night desk (Bee is the most senior correspondent, after all), Bee and Jones went on record for their feelings for a female host. "We're life-long fans of the show," Bee said.

"I thought you were going to say we're fans of women," Jones said, echoing my thoughts exactly.

"I've always said that about women. I'm a fan," Bee quips, as Jones goes "on record" for being a fan of women. The quick humor between the two is absolutely hysterical to watch. "We're excited for the opportunities," Bee says, "We do feel like it's going to be exciting. Whatever change occurs, we don't know what it is; we're excited to find out."

So there you have it: Nobody knows who's replacing Stewart, except for maybe, Stewart himself.

Even though the news came as a huge shock to those who follow Comedy Central's news programming — we lost The Colbert Report in December — Stewart will leave a mark on comedy that is incomparable. "He's created something that was not even really imaginable before he started at the show," Bee explains. "We've been lucky enough, because we've been there long enough, that we've lived those changes and we've lived the evolution of the show."

"It is a legacy. It's the end of an era and it's the beginning of a new era. We're excited to see where that's going to take us," Bee remarks.

While we don't know where that legacy will take them, one place we do know Bee and Jones are going to be going is to award shows, but not by means of "celebrity." The duo is teaming up with Butterfinger Cups to "butt-in" to award season — aka crash — where fans can track their progress (or not) on ButterfingerCups.com.

"We've never been invited to award shows," Jones says. "We've begged, we've asked, we've hired PR companies to try to get us in. It doesn't work, so we're butting in now."

While you can see just how well "butting in" works for Bee and Jones on ButterfingerCups.com, they gave a few hints at how it might not work out in their favor. "We will be escorted out of things. More than you will see what's going on inside, you will see us being removed physically," Bee said.

"Sam's kind of into that, being removed from gift lounges," Jones added.

"I used to want to go into parties, and now I just want to be removed from them. I think it's a better story. I think I'm setting a better example for my children."

But regardless of how well their award show crashing goes or if they're eventually crowned king and queen of Daily Show Land, we can look forward to their continually hilarious contributions to the "fake news" on Comedy Central's crown jewel.