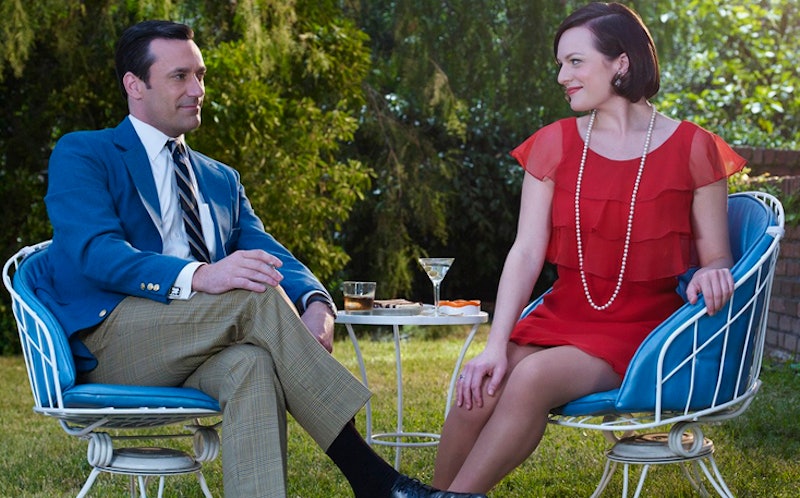 It's a-comin': The end of Mad Men is, sadly, near, and in the final few episodes of the series, the times are definitely changing for the character. They have been all along, of course, but as the show rounds out the '60s — and, thus, rounds out the show as a whole — things are changing in a whole new way. And yet, even with the first Mad Men Season 7 part 2 teaser, we still know very little about what this final run of episodes have in store. Mad Men creator Matthew Weiner's always been notoriously tight-lipped about upcoming plots for the series and the cast learned long ago to be the same. (In fact, even the show's previews that air afterepisodes reveal literally nothing about the plot, to the point of the "Next On Mad Men " promos being parodied by frustrated but amused fans.)

So what can we glean about what this latter half of season 7 holds in store? Well, what we've got is pretty much 1) what they've told us, and 2) breadcrumbs left by the first half of season 7. In other words: Very few solid details, but a lot of possibilities.

But, at this point in the show's run, isn't that some of the fun of being a fan? Very few properties out there can pull off leaving us quite as blind as Mad Men can.

Still, I'd be lying to myself if I played this like I'm not wracking my brain for every possible plot play-out — or like I haven't been hoarding quotes that lay out what might be coming. So here's what we know we can expect.

With Mad Men, always expect to know way more about tone and theme than about actual plot points. Among those this season, Weiner revealed during a TCA panel in January that it's not just the final episode that feels like an ending: "The last seven episodes, each of them feels like the finale of the show."

Don't Expect An Ending That Panders

This has long been Mad Men gospel: This is not a show that plays into what the audience wants. Weiner also discussed that at that January TCA panel, saying that in this half of the season "the shows became so much more concentrated on these characters:

I am extremely interested in what the audience thinks [of the ending]. I’m trying to delight them … not frustrate them. I don’t want them to walk away angry. [...] I don’t want to pander to [fans], either. I know this sounds patronizing … but as the person telling the story, [sometimes] people need to be protected from they want to see. You just can’t give them everything they want. And sometimes audiences have to expect what they don’t want to see … Bad things happening can be good entertainment.

So does this mean that bad things are gonna happen? I mean, probably — crazy and/or bad things happen all the time on Mad Men. Never forget that sawed-off nipple in a box. I guess the wallop of this one depends on what's happening to who.

We Know Certain Actor's Responses To Their Character's Endings

To go off of Weiner's cryptic teasing, Vulture also recalls that the TCA panel involved some of the actors talking about their reactions to how their characters were wrapped up (if they're wrapped up at all). The ones we know of:

A Potential Tease On Where Peggy Is In Season 7.5

Going off that last note, here's what Moss said in a recent interview with TV Guide when talking about Peggy's evolution:

She grows up…She becomes harder in a lot of ways. She gets her heart broken; she has bitter moments.…But I hope that she still retains that sense of honesty and positivity and truth. She’s earnest. She very much believes in whatever she’s saying. I think she still has that despite the fact that she’s had some hard knocks.

The Ad Agency Is Dealing With Changes Again

Sometimes I wonder if there have been any other TV companies that have gone through as many name changes throughout the series' run as Sterling Cooper/Sterling Cooper Draper Pryce/SC&P/Whatever they're called now. The end of last season saw another major change at the hand of Roger: The company's been sold, and their eldest leader passed — though in grand fashion with a musical number, of all things. So we will, undoubtedly, be dealing with the results of that in the series' final run of episodes.

He and Megan called their marriage quits at the end of last season. Is Don dating now? Is he back to prostitutes? Or, given that Megan's very present in the promo and images, is she still hanging around? And in what capacity? Marriage rarely stopped Don from pursuing other women in the first place, so it'll be interesting to see how this post-divorce Don is different than the first post-divorce Don.

As part of McCann acquiring 51 percent of the agency, all the partners got deals that essentially made them multi-millionaires. Seeing what they do with it will be another interesting thing to watch this season.

What this means for Peggy, who knows, but a (depressed, very recently suicidal) Ted Chaough is coming back to New York to write coupon copy.

A Transfer Of Eras

Mad Men's always been about the end of an era — namely, the end of the era in which men like Don Draper were king. Don's a straight-up square in late-'60s New York, and we're about to hit the '70s. I sincerely hope there are mustaches involved. We already know there's lots of plaid.

People Will Change...But They Also Won't

Also at TCA, Moss teased this:

Part of our story in this last season [is], people do change, but then in a lot of ways, they don't unfortunately.

Don Draper Will Still Stand Suavely & Cryptically Next To Pools

This may never change.