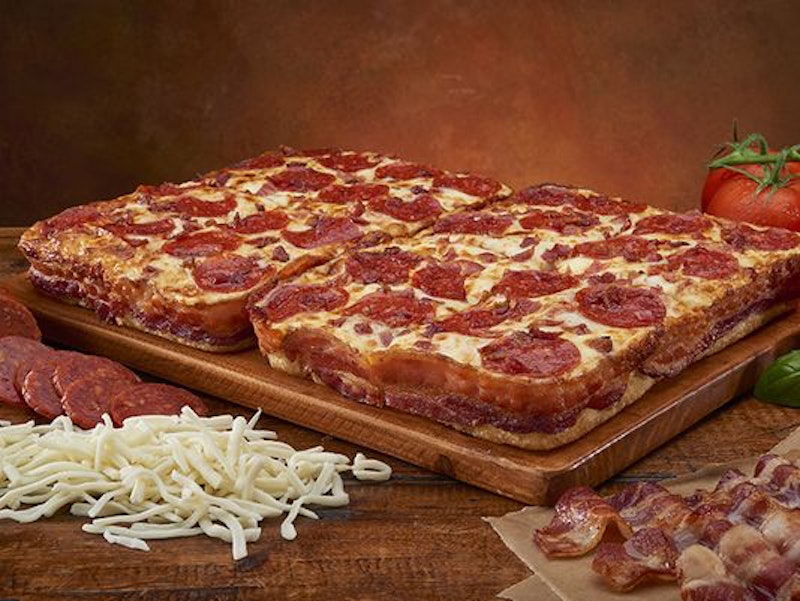 By now you may have seen the latest fast food gimmick circulating the Internet — namely, Little Caesar's Bacon-Wrapped Crust Deep! Deep! Dish Pizza (and yes, that's its full title). When I say it's either madness or genius, what I probably mean is that it's a little bit of both; what else does one call the marriage of two of the most perfect foods in existence? Can you handle it? I hope so, because something tells me it's going to be worth it.

According to the Huffington Post, this magnificent (or monstrous?) creation will be hitting Little Caesar's locations on Monday, February 23; it will set you back $12 per pie and includes a whopping three and a half feet of bacon lovingly wrapped around its crust. You heard me: Three and a half feet. 42 inches. A length of bacon that is taller than the average four-year-old. It'll only be around until April, though, so you'll have to act fast if you want one. Unsurprisingly, it's terrible for you — according to USA Today, a single slice has 450 calories, 23 grams of fat, 830 mg of sodium, and 40 mg of cholesterol — but, as Little Caesar's CEO David Scrivano said, “You can always get a plain, cheese pizza or a veggie pizza. This is a more indulgent offering for a demographic that craves premium quality.” Also, if you're trying to eat healthy, what are you doing at a fast food pizza joint in the first place? You will not find the answers you're looking for there. I guarantee it.

Anyway, it appears the idea has been in the works for a while; USA Today reports that a member of the Little Caesar's R and D team ordered a bacon-wrapped fillet while out to dinner a few years ago, which subsequently inspired the entire team to think, “Guys! How do we do this to a pizza crust? Because that is AMAZING!” Several years later, they're all reaping the fruits of their labor, and you know what? I hope it tastes like... well, you know.

Although I was not privy to the development process that resulted in the Bacon-Wrapped Crust Deep! Deep! Dish Pizza, here's what I imagine the test kitchen looked like at various points. After all, it's a fine line between genius and insanity, is it not?

Procedure: Begin by ignoring the pizza dough entirely. Instead, construct a rectangular bacon weave to serve as a crust substitute. Build pizza on top of bacon weave, bake, and enjoy.

Results: Delicious, although not, in the strictest sense, pizza. Also, complete and sturdy bacon weaves would likely be too complicated to produce in the quantities and at the rate such a menu addition would require.

Procedure: Begin by laying down strips of bacon. Lay a rolled-out sheet of dough atop the bacon, making sure that it is at least one inch smaller in diameter all the way around. Fold bacon ends over the top of the dough ends, build pizza as usual, bake, and enjoy.

Results: Crunchy, but somehow not bacon-y enough. The bacon-to-crust ratio may be the culprit; too much crust prevents the true bacon-ness of the bacon to shine through.

Results: Unfortunately, laying the bacon between the crust and the cheese resulted in the entire top of the pizza sliding off — bacon, sauce, and all. Taste test subsequently inconclusive.

Procedure: Roll out dough and build pizza per normal instructions. Top with as many strips of bacon as one may conceivably be able to fit on the surface of a pizza. Bake and enjoy.

Results: Tasty, but too similar to a pizza topped with large amounts of bacon crumbles. Not innovative enough.

Note: Due to Steve's breakdown following attempt 35, bacon pizza testing duties have been take over by Gerald, previously second in command.

Procedure: Before placing dough in pan, line edges with up to but not exceeding 3.5 feet of bacon. Insert dough, build pizza as per normal instructions, bake, and enjoy.

Status: Passed with flying colors! Bow down before me, for I am like a god! A bacon-y, delicious god!