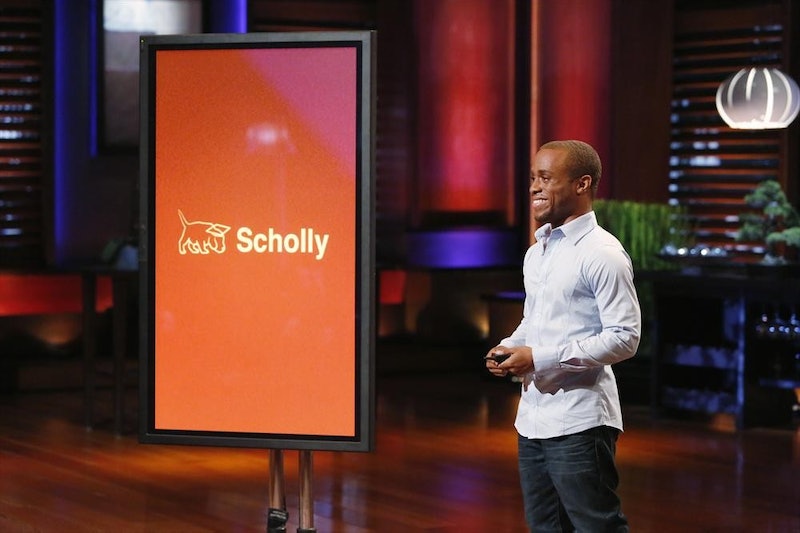 If you've been as curious as I have about exactly what would be the source of this season's much promoted Shark-Walkout, then settle in. According to an ABC press release, on this week's episode of Shark Tank, Scholly will be revealed as the entrepreneurial venture that's about to start a flurry in the Tank. Since the first trailer for Season 6, ABC has shown Robert Herjavec heatedly telling Lori Greiner, "Lori, that is such crap! I don't want to say something rude to you, so I'm just going to go," and as the season has progressed, that provocative clip has been dramatically extended to show Mark Cuban and Kevin O'Leary vacating their Shark thrones alongside Robert, as well. And, apparently, it's all because of scholarship funding app, Scholly.

Scholarship funding might seem an odd source for such dramatics, but Scholly combines three things that always get the Sharks going: money, education, and one solid entrepreneur behind it all: Christopher Gray. Gray, named "The Million Dollar Scholar" by many a media outlet, scoured his options after being accepted to college and earned $1.3 million in scholarships for his education at Drexel University. In spending months researching, applying for 50 scholarships, and winning 34, Gray discovered that the key to utilizing the millions of scholarships available to students, is to know which of those millions you're qualified to received. And there's a market for that...

The Motivation Behind The App

In promos for Friday's episode, Daymond John tells Gray that he relates to his story and the need for Scholly because they were both raised by single mothers. As Gray told BET in August 2014, “My mom lost her job, so I had to apply for a lot of scholarships. It took several months and the desperation gave a little motivation." That experience — both the painful time it took to track down scholarships and realizing that there are tons of scholarships out there available to be tracked down — is what inspired Gray to come up with a way to make the scholarship hunting process more efficient and effective.

How It Works & Where To Get It

Along with a fellow Coca-Cola Scholarship winner, Bryson Alef, Gray got to work turning an idea into an algorithm. They wanted to take a process that took Gray months — researching and refining which scholarships he qualified for and was most likely to receive — and turn it into minutes, all right there in the palm of a student's hand. Together, the entrepreneurs came up with a formula that Gray told BET, "aggregates and matches students with scholarships they qualify for based on eight parameters constructed on attributes like grade, state and need.” Students use drop-down menus to select criteria that best describes them, and in minutes they're provided with a list of scholarships, vetted by the Scholly team, for which they're qualified to apply.

While the app started as strictly mobile-based, it's now been turned into a web platform as well, available for bulk purchase by schools or businesses to provide as a service to students. You can also download the original app for 99 cents from the iTunes App Store or Google Play.

Will The Funding Get Funded?

There's hardly anything not to like about what Scholly is doing. And it seems pretty clear from the promos that the drama that gets stirred up on the Tank is more about the Sharks than it is about Gray. So, what's the likelihood of an investment? It's looking pretty good. According to Technically Philly, Gray is "a pro when it comes to pitching." And it's probably because he not only has a product that's helping fund and inspire education, but because he knows it works. He's got the proof: himself. Technically Philly also reported that Gray has already locked down $33,000 in funding at Drexel’s annual Baiada Incubator Competition and won the "Fast Pitch" competition at Keiretsu Forum’s Mid-Atlantic Angel Capital Expo.

Potentially, all that pre-Shark Tank funding could work against Scholly, but something tells me that Robert, Mark, and Kevin don't leave the room because they're trying not to invest in Gray's app. The "Million Dollar Scholar" might just become the Million Dollar Entrepreneur.