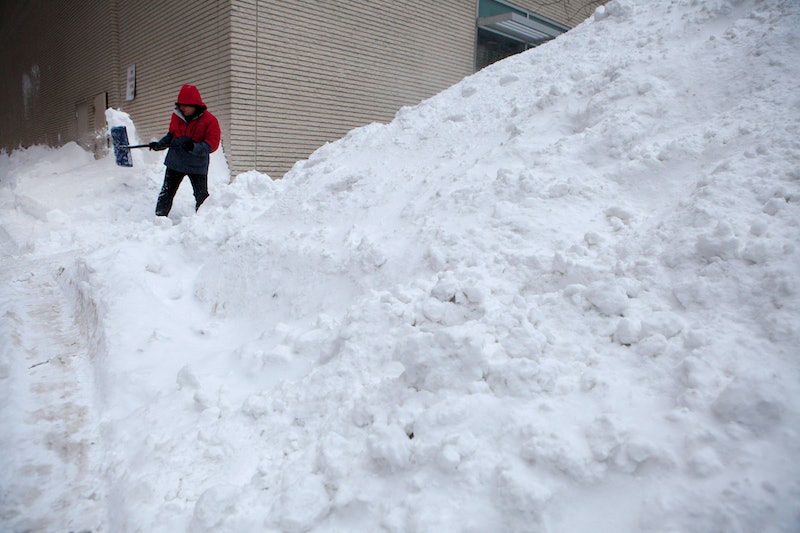 Utterly contradicting every weather-related comment you've been hearing for weeks, the winter of 2015 isn't quite as bad as everybody thinks. OK, yes, this past month has been bone-chillingly cold and, yes, the Northeast has gotten absurd amounts of snow in the last few weeks — but, believe it or not, on the whole the winter of 2015 has been surprisingly warm for the U.S.

While February’s temperatures have been much colder than average, the rest of the winter months have not followed suit. In January, for example, the National Climatic Data Center (NCDC) reports that nearly 3,500 records were set for daily high temperatures. In fact, the period from December 2014 to January 2015 was so warm that it ranked as the sixth warmest in the U.S. since 1895. Globally, January 2015 ranked as the second warmest on record.

And although the month of February has felt particularly brutal, the NCDC reports that, across the board, it’s really not all that bad. While there have been 236 records for cold temperatures set so far in February, there have been 4,074 records set for warm temperatures. Granted, most of those warm temperature records have been recorded in cities out west such as Seattle, Las Vegas and Salt Lake City, it still serves to debunk claims about just how terrible this winter has been.

So if this winter actually hasn’t been this terrible, then why are we complaining so much? New York Magazine’s Science of Us reports that, well, it’s pretty much all in our heads. Several nuggets of research show that our opinion of how severe the weather is depends on the severity of the weather that we’ve been experiencing lately.

For example, this video from MinuteEarth says that after one of the United Kingdom’s rainiest weeks ever, Brits who experienced flooding were much likelier than those who had not to say they’d “noticed wetter and wetter weather over the course of their lives.” The same thing happened in the Midwest after the drought in 2012. More people said they noticed longer and more sever dry spells after the drought than before. So it’s likely that last winter’s extremeness is impacting jut how extreme we think this winter’s weather is.

Moreover? Our overestimation of just how cold this winter’s weather is may in part be due to the media’s hyperbole. As the MinuteEarth video points out, there are so many different news outlets vying for attention that they’re more likely to highlight or even dramatize winter weather — think the names the Weather Channel now gives to winter storms — than they used to be.

Yeah, it's cold. It's really, really cold. But it could be worse. That's a warm and fuzzy thought, right?

More like this
The Families Of Grenfell Tower Are Still Waiting For Justice, Five Years On
By Bustle UK
13 Summer Solstice Quotes To Celebrate The Longest Day Of The Year
By Sadie Trombetta
The Summer Solstice Spiritual Meaning, Explained
By Jessica Booth and Brittany Beringer
The 7 Best Waterproof Sprays For Shoes
By Marshall Bright
Get Even More From Bustle — Sign Up For The Newsletter