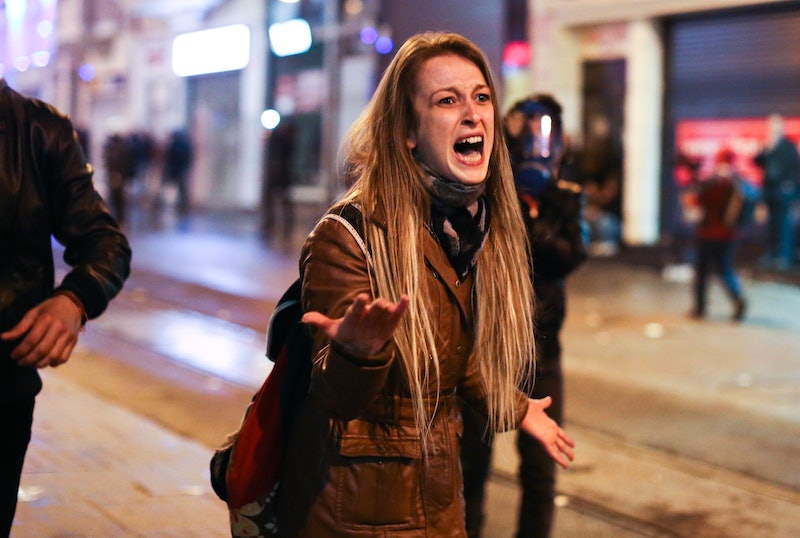 The attempted rape and brutal murder of Özgecan Aslan in Turkey has led to protests across the country; thousands of outraged citizens have taken to the streets to demand an end to violence against women. Aslan, a 20-year-old student from Turkey's southern city of Mersin, was riding a minibus home on the afternoon of Feb. 11 when the driver allegedly attacked her.

When Aslan used pepper spray to resist the assault, he reportedly stabbed and bludgeoned her to death. The 26-year-old man then allegedly enlisted the help of his father and a friend to dispose of her body. Aslan's burned remains were discovered in a riverbed three days later.

Both the tragic case and the protests that followed highlight a frightening increase in instances of gender violence in Turkey in recent years. Data released by the country's justice department in 2011 revealed that the number of women murdered each year in Turkey rocketed 1,400 percent between 2002 and 2009. The United Nations Development Program reports that 42 percent of Turkish women has experienced physical violence and/or sexual violence.

Women's right's groups in the country have pointed a finger at the socially conservative Justice and Development Party (AKP) government, headed by President Recep Tayyip Erdoğan, as perpetuating the problem. During a women's justice summit last November, the president drew ire when he claimed that women were not equal to men and suggested that the ultimate position for women as defined by Islam was motherhood.

"There is a feeling in Turkey among those who do not support the government that the government has created the conditions for this kind of attack with their policies and with their discourse," Emma Sinclair-Webb, a senior researcher for Turkey at Human Rights Watch, tells Bustle in a phone interview from Istanbul. "When you look at this case, it is the kind of case that could happen in any country — how can the government be responsible? Yet the slogan in the demonstrations was 'the men shoot and the state protects.'"

As horrific as Aslan's murder was, violence at the hands of strangers is not the biggest threat to Turkish women. Like their American counterparts, a woman in Turkey is far more likely to be assaulted or killed by a husband or domestic partner. According to Bianet, an independent Turkish media network that has tracked incidents of violence against women, of the 27 women murdered in Turkey in January, 48 percent were killed by their husbands. In contrast, just one killing was perpetrated by a stranger.

Just a week after Aslan's murder, a woman was stabbed and dismembered in Istanbul. Police have said her husband confessed to the crime.

Despite the criticism facing Erğodan, the AKP government has enacted progressive legislation, including the adoption of a new domestic violence law in 2012 aimed at offering women more comprehensive protection. However, violence against women has continued to increase, suggesting that legislation alone is not enough. "The law has not been implemented successfully at all," says Sinclair-Webb, adding that she believes that for the situation to improve, the government needs to identify the reasons why it has been incapable of implementing such laws.

"The constant discourse which denies the equality of men and women is another thing that has to change," Sinclair-Webb says. "There has to be a sea change in the government's attitude toward gender equality."

The Turkish president himself may be among those who could benefit from such a shift in gender views. In the aftermath of Aslan's murder, Erğodan came under fire again for another sexist comment. Just days after denouncing violence against women as the country's "bleeding wound," the Turkish president stated that women are men's responsibility and dismissed feminists who would take offense to the idea.

The Turkish daily Today's Zaman reported that Erğodan made the remarks during an address Wednesday outside the presidential palace.

I stand up and say that women are men's responsibility from Allah. But you know these feminists, they say, ‘What do you mean women are entrusted [to men], this is an insult'. Well you [feminists] don't have any interest in our religion or in our civilization.

In the meantime, some women's advocacy groups hope the outcry following Aslan's murder will usher in positive change — both in Turkey and in other European countries where domestic violence remains pervasive.

"It is very good that people went into the streets," Pierrette Pape, a policy officer and project coordinator at the European Women's Lobby in Brussels, tells Bustle. "It will help to make people aware that violence is taking place every day in different forms, and that what happened to this woman is the tip of the iceberg."

In the days following Aslan's murder, tens of thousands of women took to Twitter to raise awareness and to share their own stories of violence and harassment under the hashtag #sendalat, Turkish for "tell your story."

A group of young Azerbaijani men also showed their solidarity by donning miniskirts and posting the images on Facebook.

For Pape, such mobilization on the streets and online give Aslan's tragic story a silver lining. "It might lead to a larger global awareness about violence against women, especially among young people," Pape says of the protests. "It looks like the young generation wants a change."