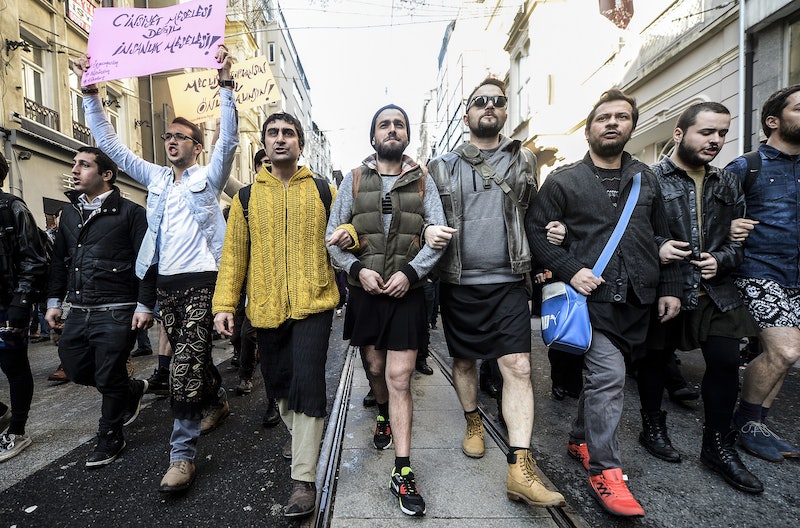 Earlier this month, the murder of a young Turkish woman sparked a massive outpouring of grief and anger in that country, primarily on Twitter, primarily by women. But now Turkish men have joined in donning skirts on social media and on Istanbul’s main thoroughfare to express their solidarity in the battle for gender equality. The move is an important indication of broad-based support for women's rights in a country that has for too long shown little evidence of such sentiments.

Turkey, a resolutely patriarchal society, has a terrible track record when it comes to violence against women. In 2009, a survey discovered that 39 percent of Turkish women reported having suffered physical violence at some point in their lives. Last year, Today’s Zaman (an English-language Turkish daily) suggested that the rate of femicide was increasing, after an already dismal showing of 214 murdered women in 2013 (actually down from a shocking high of 953 in 2009).

It seems, then, that the brutal murder of 20-year-old psychology student Özgecan Aslan has acted as the straw that broke the camel’s back. On Feb. 11, Aslan was traveling home in the coastal Mediterranean town of Mersin, when the driver of the minivan in which she was riding attempted to rape her. Aslan resisted, reportedly fending off her attacker with pepper spray. He then stabbed her and beat her to death using an iron bar. Aslan’s burned body (her hands cut off, according to Today’s Zaman) was discovered in a river two days later.

Aslan was laid to rest on Feb. 14. A 26-year-old man, Ahmet Suphi Altındöke, was arrested after a lag of several days, and Turkey exploded: the violent crime provoking an unprecedented wave of nationwide protests and virulent social media campaigns hoping to shed light on the horrifying rates of gender-based violence in the country. As The Guardian reported, the response initially began coagulating around the hashtag #sendeanlat (meaning “tell your story”) — encouraging Turkey’s women to share their own experiences of sexual assault and the insidious fear of potential violence. Prominent novelist Elif Shafak took to The Guardian instead, reminiscing about her high school days, when she made sure to carry an open safety pin in her hand, “to poke molesters with.”

After the initial wave of women, Turkey’s men are now gallantly stepping up to the plate. The hashtag #ozgecanicinminietekgiy (approximately, “wear a miniskirt for Özgecan"), was introduced from neighboring Azerbaijan on Wednesday, Buzzfeed reports, accompanied by photographs of men wearing miniskirts and holding placards. The BBC quotes a statement made by proponents on Facebook, which reads (with overtones of the controversial Slut Walk movement): “If a miniskirt is responsible for everything, if [wearing] a miniskirt means immorality and unchastity, if a woman who wears a miniskirt is sending an invitation about what will happen to her, then we are also sending an invitation!”

Upping the stakes, a group of men took their new fashions to the streets on Saturday: defiantly stalking down Istanbul’s İstiklal Avenue in miniskirts despite the wintry chill, according to Today’s Zaman.

And it really is about time. Despite some political action on the issue, such as legislation passed in 2013 that increased protection for women in accordance with EU requirements, little has practically been done to stem the steady flow of rapes, assaults, and murders — many of which occur in a domestic setting. Moreover, President Recep Tayyip Erdoğan, in power since 2003 as the Sunni leader of the Justice and Development Party (AKP), has often made Turkish women fear a backward slide into inequality.

The AKP lifted Turkey’s ban on headscarves, which was put in place during the militantly secular rule of Mustafa Kemal Atatürk, founder of the modern Turkish Republic. Although this was an element of the party’s successful election platform in 2002, critics considered the move a significant threat to Turkey’s "secular" ideals. Moreover, as I explained in an article for Guernica last year, Erdoğan has consistently made inflammatory statements that indicate his retrograde attitude towards women, suggesting that motherhood is the feminine ideal and abortion is equivalent to murder. He also, in a brilliant tactical maneuver, told a room full of feminists that he did not believe in equality between men and women. He outrageously repeated that sentiment shortly after winning the presidency last year (having held the post of Prime Minister for the preceding twelve years), during a speech at an international Women and Justice summit in Istanbul. Men and women can not be equal, he said, "because it goes against the laws of nature."

Even Erdoğan, however, recognizes the necessity of a sympathetic response to this latest outcry. In a speech from Ankara following the killing, the president referred to violence against women as the “bleeding wound” of Turkey, according to a Reuters dispatch. It remains to be seen whether he or his government will take responsibility for closing that wound, but it is encouraging to witness at least some of Turkey’s male population expressing their support for gender equality in a campaign that would undoubtedly make Emma “He For She” Watson proud.