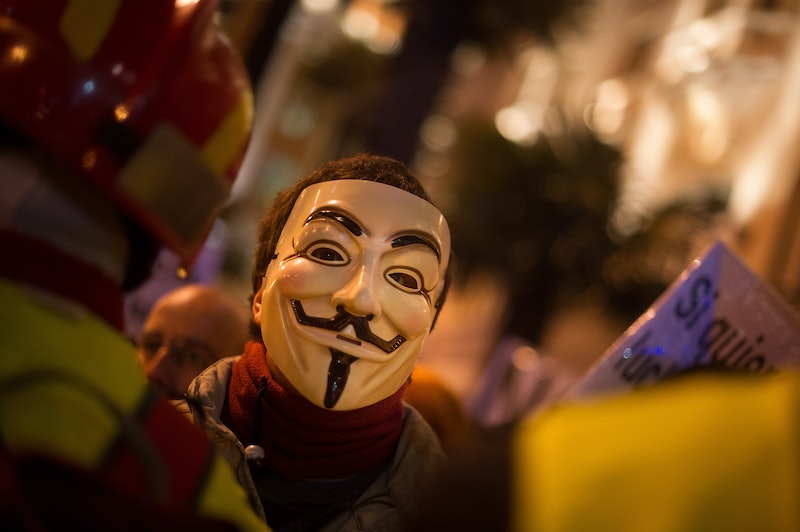 For an unidentified group, the hacker collective called Anonymous has made the news quite a few times since its inception ­— both for good and for bad. They’re largely considered the most famous hacktivist group in the world. The New Yorker surmises that they might just be the most powerful non-government hacking group in the world. Just this past Tuesday, for instance, Anonymous shut down hundreds of social media accounts of users linked to the Islamic State. So, exactly how did Anonymous start, where do they come from, and what are they trying to do?

The group, which is composed of a loosely organized international network of hacktivists, has its roots from the online image-based bulletin board 4chan, which started in 2003 and is used by people all over the world. The name "Anonymous" was inspired by the perceived anonymity under which users posted on 4chan. The group’s two symbols — the Guy Fawkes mask that they wear in public and the "man without the head" image — both underscore the group’s inscrutability and lack of any formal leadership. Members of the group calls themselves "hacktivists," a word coined from the combination of hacker and activist. This title emphasizes the group’s desire to use their technological savvy for a specific purpose and cause.

The hacker collective’s first cause to make headlines was a 2008 effort called "Project Chanology." After the Church of Scientology removed a video of Tom Cruise touting the benefits of the religion from the Internet because it portrayed the church in a negative light, Anonymous struck back by posting a video to YouTube called "Message To Scientology." The group said they wanted to uncover how danger an organization Scientology actually was, and how the cult’s removal of the Tom Cruise video violated free speech. Between marches outside of Scientology churches and the videos the group posted, they managed to establish their power and resolve in this first project.

Since then, the hacker collective has been involved in everything from Occupy Wall Street to the shooting of Michael Brown in August. While Anonymous initially was lambasted in the media for cyberattacks on the government and businesses, the group’s reputation has shifted recently. The Washington Times reports that the group is now even being praised for its work, particularly its mission to combat cyber jihadists. The British newspaper The Sun even went so far as to call the collective “the digilantes” for their efforts to retaliate against the terrorist attacks on French satirical newspaper Charlie Hebdo.

Whoever they are, wherever they are, — with their philosophy of activism, hopefully Anonymous continues to use their powers for good, rather than evil.

More like this
Meet The Rugby World Cup Breakout Star Making The Sport More Inclusive
By Shahed Ezaydi
Here's The Role Lady Susan Hussey Played At Buckingham Palace
By El Hunt
How To Follow The New Royal Family Social Media Accounts
By Sam Ramsden
Is Queen Elizabeth II Or The Royal Family In Netflix’s 'Harry & Meghan' Docuseries?
By Jake Viswanath
Get Even More From Bustle — Sign Up For The Newsletter