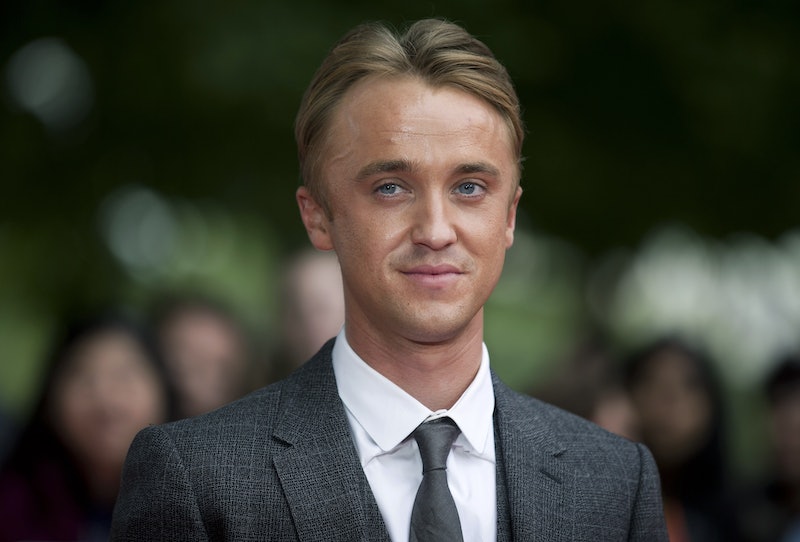 If you're as much of a Harry Potter devotee as I am, the complete lack of new Harry Potter-relatedmaterial in the world has been palpable as of late. It's been far too long: The book series ended in 2007; the film series soon followed, in 2011. Sure, there have been things like Pottermore and J.K. Rowling's new book series to help Harry Potter fans along — but still, the hole in our hearts that used to be perfectly filled by a new Harry Potter book is tough to ignore. And, seriously: There are only so many times I can visit the Harry Potter studio tour in London and The Wizarding World of Harry Potter in Florida before my bank account yells "enough." So, this? This is basically the best news for HP fans ever: According to the Daily Dot, Draco Malfoy himself Tom Felton is making a BBC documentary about the Harry Potter fandom, which will air on the network as soon as April of this year and be released online for the masses to view.

In other words: SORT OF NEW HARRY POTTER MATERIAL.

The documentary, as Uproxx explains, "will include interviews with Felton’s former co-stars, including Daniel Radcliffe and Rupert Grint, as well as author J.K. Rowling," and will also investigate the intricacies that a fandom world can feature, such as fan events like Comic Con.

While the thought of Draco Malfoy producing a documentary that delves into how fans love their favorite shows, books, and movies seems absolutely foreign to anyone who's read even a chapter of Harry Potter and the Sorcerer's Stone, I personally think this news totally just confirms last month's revelation that Tom Felton himself is a member of the Gryffindor house after all: Draco may not have cared about others if he was actually, you know, real, but Felton does — in fact, he's totally fascinated by the concept. From JustJared:

It’s an hour-long one-off that we’re doing with BBC and KR Films. It’s just kind of a chance for me to have a more in depth look at the world of super fans and these people that have followed franchises–kind of at the root of why Harry Potter was so successful. It had such an active fan base. It’s allowed people to be passionate about stuff that maybe they couldn’t be so open with in previous years. It’s kind of a look into that, it’s a road trip journey with me narrating.

Ugh, can it be April already?